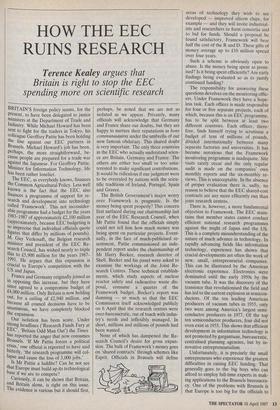 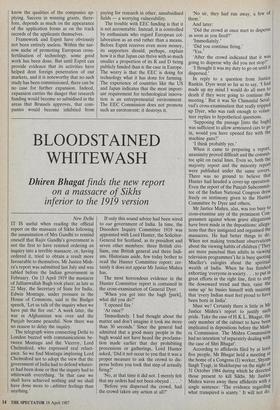 HOW THE EEC RUINS RESEARCH

BRITAIN'S foreign policy seems, for the present, to have been delegated to junior ministers at the Department of Trade and Industry. While Michael Howard has been sent to fight for the traders in Tokyo, his colleague Geoffrey Pattie has been holding the line against our EEC partners in Brussels. Michael Howard's job has been, perhaps, the more straightforward, be- cause people are prepared for a trade war against the Japanese. FOr Geoffrey Pattie, Minister for Information Technology, life has been rather lonelier.

The EEC, as everybody knows, finances the Common Agricultural Policy. Less well known is the fact that the EEC also finances a programme of support for re- search and development into technology called 'Framework'. This not inconsider- able programme had a budget for the years 1983-.1987 of approximately £2,100 million (approximately, because EEC budgeting is so imprecise that individual officials quote figures that differ by millions of pounds). M. Guy Verkosaft, the Belgian research minister and president of the EEC Re- search Council, has wished nearly to triple this to £5,900 million for the years 1987- 1991. He argues that this expansion is crucial to Europe's competition with the US and Japan. France and Germany originally joined us in opposing this increase, but they have since agreed to a compromise budget of £4,000 million. Only Britain is now holding out, for a ceiling of £2,940 million, and because all council decisions have to be unanimous, we have completely blocked the expansion.

Our isolation has been acute. Under strong headlines (`Research Funds Fury at EEC', 'Britain Odd Man Out') the Times has reported the anger that now consumes Brussels. 'If Mr Pattie forces a political crisis,' one official is reported to have said bitterly, 'the research programme will col- lapse and cause the loss of 3,000 jobs.' Is Mr Pattie a luddite? Can he not see that Europe must build up its technological base if we are to compete? Curiously, it can be shown that Britain, and Britain alone, is right on this issue. The evidence is various but it should first, perhaps, be noted that we are not so isolated as we appear. Privately, many officials will acknowledge that Germany and France share our doubts, but they are happy to nurture their reputations as bons communautaires under the umbrella of our now famous obduracy. This shared doubt is very important. The only three countries in the EEC who actually understand scien- ce are Britain, Germany and France. The others are either too small or too unin- terested to make significant contributions. It would be ridiculous if our judgment were to be overruled by nations with the scien- tific traditions of Ireland, Portugal, Spain and Greece.

The British Government's major worry over Framework is pragmatic. Is the money being spent properly? This concern first surfaced during our chairmanship last year of the EEC Research Council, when Mr Pattie found that the officials simply could not tell him how much money was being spent on particular projects. Event- ually, in the face of much-publicised re- sentment, Pattie commissioned an inde- pendent report under the chairmanship of Mr Harry Becker, research director of Shell. Becker and his panel were asked to examine the workings of the Joint Re- search Centres. These technical establish- ments, which study aspects of nuclear reactor safety and radioactive waste dis- posal, consume a quarter of the Framework budget. Becker's report was damning — so much so that the EEC Commission itself acknowledged publicly on 6 April that the research centres were over-bureaucratic, out of touch with indus- try's needs and inflexibly managed. In short, millions and millions of pounds had been wasted.

None of which has dampened the Re- search Council's desire for gross expan- sion. The bulk of Framework's money goes on 'shared contracts' through schemes like Esprit. Officials in Brussels will define areas of technology they wish to see developed — improved silicon chips, for example — and they will invite industrial- ists and researchers to form consortia and to bid for funds. Should a proposal be found satisfactory, Framework will bear half the cost of the R and D. These gifts of money average up to £10 million spread over four years.

Such a scheme is obviously open to abuse. Is the money being spent as prom- ised? Is it being spent efficiently? Are early findings being evaluated so as to justify continued funding?

The responsibility for answering these questions devolves on the monitoring offic- ers. Under Framework they have a hope- less task. Each officer is made responsible for four or five separate projects, each of which, because this is an EEC programme, has to be split between at least two different countries. Each officer, there- fore, finds himself trying to scrutinise a budget of tens of millions of pounds, divided internationally between many separate factories and universities. It has become notorious that the Framework monitoring programme is inadequate. Site visits rarely occur and the only regular audit is made on the companies' own monthly reports and the six-monthly re- views. This is unacceptable. In the absence of proper evaluation there is, sadly, no reason to believe that the EEC shared-cost contracts are any more efficently run than joint research centres.

There is, however, a more fundamental objection to Framework. The EEC main- tains that member states cannot conduct efficient national research programmes against the might of Japan and the US.

This is a complete misunderstanding of the nature of much advance in technology. In rapidly advancing fields like information technology, experience has shown that crucial developments are often the work of new, small, entrepreneurial companies.

This can be illustrated by the American electronic experience. Electronics were dominated until the early 1950s by the vacuum tube. It was the discovery of the transistor that revolutionised the field and has led to the current explosion in semicon- ductors. Of the ten leading American producers of vacuum tubes in 1955, only two were among America's largest semi- conductor producers in 1977. Of the top ten semiconductor producers, four did not even exist in 1955. This shows that efficient development in information technology is not promoted by gargantuan, bureaucratic, centralised planning agencies, but by in- novative entrepreneurialism.

Unfortunately, it is precisely the small entrepreneurs who experience the greatest difficulties in raising EEC funding. That generally goes to the big boys who can afford to employ full-time experts in mak- ing applications to the Brussels bureaucra- cy. One of the problems with Brussels is that Europe is too big for the officials to know the qualities of the companies ap- plying. Success in winning grants, there- fore, depends as much on the appearance of the application forms as on the track records of the applicants themselves.

Framework and Esprit have obviously not been entirely useless. Within the nar- row niche of promoting European cross- fertilisation of technology, some good work has been done. But until Esprit can provide evidence that its activities have helped dent foreign penetration of our markets, and it is noteworthy that no such study has been commissioned, there can be no case for further expansion. Indeed, expansion carries the danger that research funding would become so subsidised in the areas that Brussels approves, that com- panies would become inhibited from paying for research in other, unsubsidised fields — a worrying vulnerability.

The trouble with EEC funding is that it is not accountable. Instead, it is controlled by enthusiasts who regard European col- laboration as an end rather than a means. Before Esprit receives even more money, its supporters should, perhaps, explain how it is that Japan can thrive with so much smaller a proportion of its R and D being publicly funded than is the case in Europe. The worry is that the EEC is doing for technology what it has done for farming. The experience of countries like the US and Japan indicates that the most import- ant requirement for technological innova- tion is an entrepreneurial environment. The EEC Commission does not promote such an enviroment; it destroys it.