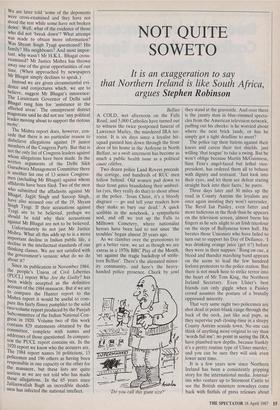 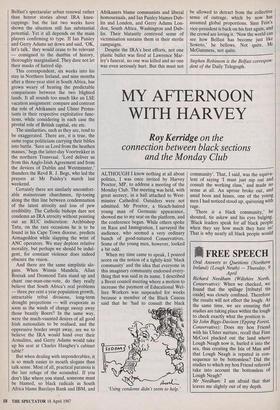 It is an exaggeration to say

Belfast A COLD, wet afternoon on the Falls Road, and 5,000 Catholics have turned out to witness the twice postponed funeral of Lawrence Marley, the murdered IRA ter- rorist. It is six days since a loyalist hit- squad gunned him down through the front door of his home in the Ardoyne in North Belfast, so a swift interment has become as much a public health issue as a political cause celebre.

Two dozen police Land Rovers precede the cortege, and hundreds of RUC men follow behind. Old women pad down to their front gates brandishing their umbrel- las (yes, they really do that) to shout abuse at the police. 'Jesus Christ, it's a bloody disgrace — go and tell your readers how they make us bury our dead.' A quick scribble in the notebook, a sympathetic nod, and off we trot up the Falls to Milltown Cemetery, where nationalist heroes have been laid to rest since 'the troubles' began almost 20 years ago. As we clamber over the gravestones to get a better view, we act as though we are extras in a 1970s BBC Play of the Month, `set against the tragic backdrop of strife- torn Belfast'. There's the alienated minor- ity community, and here's the heavy- handed police presence. Cheek by jowl `Do you call this giant size?' they stand at the graveside. And over there is the jaunty man in blue-rimmed specta- cles from the American television network, puffing out his cheeks: is he worried about where the next brick lands, or has he simply got a tight deadline to meet?

The police tap their batons against their knees and caress their riot shields, just willing 'that teague' to take a swing. But he won't oblige because Martin McGuinness, Sinn Fein's angel-faced but lethal vice- president, has ordered them all to behave with dignity and restraint. 'Just look into their eyes, and let them see defeat staring straight back into their faces,' he purrs.

Three days later and 30 miles up the road in County Antrim the loyalists are once again insisting they won't surrender. The Revd Ian Paisley, even fatter and more ludicrous in the flesh than he appears on the television screen, almost burns his fingers as he sets alight to an Irish tricolour on the steps of Ballymena town hall. He berates those Unionists who have failed to turn out to support his Day of Defiance. `I was drinking orange juice (get it?) before they were in their nappies.' Bang on cue, a blood and thunder marching band appears on the scene to lead the few hundred forlorn protestors to the police station. But there is not much here to strike terror into the heart of Mr Tom King, the Northern Ireland Secretary. Even Ulster's best friends can only giggle when a Paisley crowd assumes the posture of a brutally oppressed minority.

That very same night two policemen are shot dead at point-blank range through the back of the neck, just like seal pups, as they supervise pub closing-time in a sleepy County Antrim seaside town. No one can think of anything more original to say than `words fail me': no point in saying the IRA have plumbed new depths, because frankly it's a pretty routine type of Ulster murder, and you can be sure they will sink even lower next time.

It is a few years now since Northern Ireland has been a consistently gripping story for the international media. Journal- ists who venture up to Stormont Castle to see the British ministers nowadays come back with fistfuls of press releases about Belfast's spectacular urban renewal rather than horror stories about IRA knee- cappings: but the last two weeks have shown the situation still has substantial potential. Yet it all depends on the main players confirming to type. If Ian Paisley and Gerry Adams sat down and said, 'OK, let's talk,' they would cease to be relevant — consigned to the dustbin of history, thoroughly marginalised. They dare not let their masks of hatred slip.

This correspondent, six weeks into his stay in Northern Ireland, and nine months after a three-year stint in South Africa, has grown weary of hearing the predictable comparisons between the two blighted lands. It all sounds too much like an LSE vacation assignment: compare and contrast the role of Afrikaners and Ulster Protes- tants in their respective exploitative func- tions, while considering in each case the pivotal role of British capital, etc etc.

The similarities, such as they are, tend to be exaggerated. There are, it is true, the same rogue politicians carrying their bibles into battle. 'Save us Lord from the heathen masses,' begs the latter-day Voortrekker in the northern Transvaal. 'Lord deliver us from this Anglo-Irish Agreement and from the devices of Dublin and Westminster,' thunders the Revd R. J. Begs, who led the prayers at Mr Paisley's march last weekend.

Certainly there are similarly uncomfort- able mainstream churchmen, tip-toeing along the thin line between condemnation of the latest atrocity and loss of pew credibility. The Catholic bishops dare not condemn an IRA atrocity without pointing out an RUC indiscretion: Archbishop Tutu, on the rare occasions he is to be found in his Cape Town diocese, predicts Armageddon while slapping the wrist of ANC operators. We may deplore relative morality, but perhaps we should be indul- gent, for constant violence does indeed obscure the vision.

And there are the same simplistic slo- gans. When Winnie Mandela, Allan Boesak and Desmond Tutu stand up and chant one-man-one-vote, do they really believe that South Africa's real problems — three per cent a year population growth, intractable tribal divisions, long-term drought projections — will evaporate as soon as the winds of change sweep away those beastly Boers? In the same way, were the much-vaunted desires of all good Irish nationalists to be realised, and the oppressive border swept away, are we to believe the IRA would hand over their Armalites, and Gerry Adams would take up his seat at Charles Haughey's cabinet table?

But when dealing with imponderables, it is so much easier to mouth slogans than talk sense. Most of all, practical paranoia is the last refuge of the scoundrel. If you don't like where you stand, someone must be blamed, so black radicals in South Africa blame Barclays Bank and IBM, and Afrikaners blame communists and liberal homosexuals, and Ian Paisley blames Dub- lin and London, and Gerry Adams Lon- don, South Africa, Washington and Dub- lin. Their blatantly contrived sense of victimisation sustains them in their sterile campaigns.

Despite the IRA's best efforts, not one plastic bullet was fired at Lawrence Mar- ley's funeral, no one was killed and no one was even seriously hurt. But this must not be allowed to detract from the collective sense of outrage, which by now has assumed global proportions. Sinn Fein's vice-president is back on his feet again, and the crowd are loving it. 'Now the world can see how Belfast has become just like Soweto,' he bellows. Not quite, Mr McGuinness, not quite.

Stephen Robinson is the Belfast correspon- dent of the Daily Telegraph.