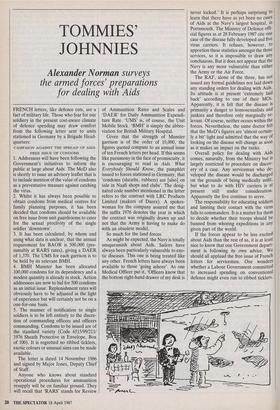 the armed forces' preparations for dealing with Aids

FRENCH letters, like defence cuts, are a fact of military life. Those who fear for our soldiery in the present cost-aware climate of defence spending may draw comfort from the following letter sent to units stationed in Germany by a Brigade Head- quarters:

CAMPAIGN AGAINST THE SPREAD OF AIDS FREE ISSUE OF CONDOMS

1. Addressees will have been following the Government's initiatives to inform the public at large about Aids. The MoD also is shortly to issue an advisory leaflet that is to include mention of the value of condoms as a preventative measure against catching the virus.

2. Whilst it has always been possible to obtain condoms from medical centres for family planning purposes, it has been decided that condoms should be available on free issue from unit guardrooms to cater for the sexual proclivity of the single soldier 'downtown'.

3. It has been calculated, by whom and using what data is unclear, that the annual requirement for BAOR is 500,000 (pre- sumably at RARS rates), giving a DAER of 1,370. The UMS for each garrison is to be held by its relevant BMH.

4. BMH Munster has been allocated 100,000 condoms for its dependency and a modest quantity is already in stock. Action addressees are now to bid for 500 condoms as an initial issue. Replenishment rates will obviously have to be adjusted in the light of experience but will certainly not be on a one-for-one basis.

5. The manner of notification to single soldiers is to be left entirely to the discre- tion of commanding officers and officers commanding. Condoms to be issued are of the standard variety (Code 6515/99/211/ 1976 Sheath Protective in Envelope, Box of 100). It is regretted no ribbed ticklers, exotic colours or unusual sizes can be made available.

The letter is dated 14 November 1986 and signed by Major Jones, Deputy Chief of Staff.

Anyone who knows about standard operational procedures for ammunition resupply will be on familiar ground. They will recall that `RARS' stands for Review of Ammunition Rates and Scales and DAER' for Daily Ammunition Expendi- ture Rate. `UMS' is, of course, the Unit Mobile Stock. `BMH' is simply the abbre- viation for British Military Hospital.

Given that the strength of Munster garrison is of the order of 10,000, the figures quoted compute to an annual issue of ten French letters per head. If this seems like parsimony in the face of promiscuity, it is encouraging to read in Aids. What Everybody Should Know, the pamphlet issued to forces stationed in Germany, that `condoms (sheaths, rubbers) are [also] on sale in Naafi shops and clubs'. The desig- nated code number mentioned in the letter refers to the contract with LRC Products Limited (makers of Durex). A spokes- woman for the company assured me that the suffix 1976 denotes the year in which the contract was originally drawn up and not that the Army is having to make do with an obsolete model.

So much for the land forces.

As might be expected, the Navy is totally unsqueamish about Aids. Sailors have always been particularly vulnerable to exo- tic diseases. This one is being treated like any other. French letters have always been available to those 'going ashore'. As one Medical Officer put it, 'Officers know that the bottom right-hand drawer of my desk is never locked.' It is perhaps surprising to learn that there have as yet been no cases of Aids at the Navy's largest hospital, in Portsmouth. The Ministry of Defence offi- cial figures as at 28 February 1987 cite one case of the dis'ease fully developed and five virus carriers. It refuses, however, to apportion these statistics amongst the three services, so it is impossible to draw any conclusions. But it does not appear that the Navy is any more vulnerable than either the Army or the Air Force. The RAF, alone of the three, has not issued any formal guidelines nor laid down any standing orders for dealing with Aids. Its attitude is at present 'extremely laid back' according to one of their MOs. Apparently, it is felt that the disease is primarily a danger to homosexualists and junkies and therefore only marginally re- levant. Of course, neither occurs within the forces. Nevertheless, the same doctor felt that the MoD's figures are 'almost certain- ly a bit' light and admitted that the way of looking on the disease will change as soon as it makes an impact on the ranks. Overall policy for dealing with Aids comes, naturally, from the Ministry but is largely restricted to procedure on discov- ery of a case. Any serviceman who de- veloped the disease would be discharged on the grounds of being medically unfit, but what to do with HIV carriers is at present still under consideration. Apparently the five continue to serve.

The responsibility for educating soldiers and limiting their contact with the virus falls to commanders. It is a matter for their to decide whether their troops should be banned from whoring expeditions in any given part of the world. If the forces appear to be less excited about Aids than the rest of us, it is at least nice to know that one Government depart- ment is following its own advice. We should all applaud the free issue of French letters for servicemen. One wonders whether a Labour Government committed to increased spending on conventional defence might even run to ribbed ticklers.