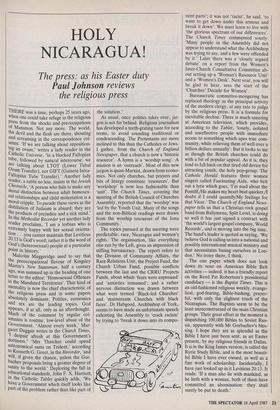 The press: as his Easter duty

THERE was a time, perhaps 25 years ago, when one could take refuge in the religious press from the shocks and preoccupations of Mammon. Not any more. The world, the devil and the flesh are there, shouting and screaming in the correspondence col- umns. 'If we are talking about reposition- ing an ovum,' writes a lady reader in the Catholic Universe, 'in a blocked Fallopian tube, followed by natural intercourse, we are talking about LTOT (Lower Tubal Ovum Transfer), not GIFT (Gamete Intra- Fallopian Tube Transfer).' Another lady reader, a rabbi no less, insists in the Jewish Chronicle, 'A person who fails to make any moral distinction between adult homosex- ual relationships and child molestation is a moral cripple. To parade these views as the distillation of Judaism is absurd; they are the products of prejudice and a sick mind.' In the Methodist Recorder yet another lady reader proclaims, 'I am a lesbian who is extremely happy with her sexual orienta- tion • • .you cannot maintain that Leviticus 20:13 is God's word; rather it is the word of God's (heterosexual) people at a particular point in history.' Malcolm Muggeridge used to say that the preoccupational flavour of Kingsley Martin's New Statesman, half a century ago, was summed up in the heading of one letter to the editor: 'Homosexual Offences in the Mandated Territories'. That kind of mentality is now the chief characteristic of the religious press and in some papers absolutely dominant. Politics, economics and sex are the leading topics. God appears, if at all, only as an afterthought. Much of the comment by regular col- umnists is routine, low-level abuse of the Government. 'Almost every week,' Mar- garet Duggan writes in the Church Times, despair afresh at this Government's dottiness."Mrs Thatcher could spend astronomical sums on Trident,' according to Kenneth G. Greet, in the Recorder, 'and will, if given the chance, unless the Gor- bachev proposals bring a greater degree of sanity to the world.' Deploring the fall in educational standards, John F. X. Harriott, in the Catholic Tablet quickly adds, 'We have a Government which itself looks like part of the problem rather than like part of the solution.'

As usual, once politics takes over, jar- gon is not far behind. Religious journalism has developed a teeth-grating taste for new terms, to avoid sounding traditional or condescending. The Protestants are more inclined to this than the Catholics or Jews. I gather, from the' Church of England Newspaper, that a church is now a 'historic resource'. A hymn is a 'worship song'. A mission is an 'outreach'. Most of this new jargon is quasi-Marxist, drawn from econo- mics. Not only churches, but prayers and bits of liturgy constitute 'resources'. But `workshop' is now less fashionable than Unit'. The Church Times, covering the meeting of the British Council of Churches Assembly, reported that the 'worship' was `led by the Youth Unit. Many of the songs and the non-Biblical readings were drawn from the worship resources of the Iona Community.'

The topics pursued at the meeting were predictable: race, Nicaragua and women's, rights. The organisation, like everything else run by the Left, gives an impression of stifling bureaucracy. The report refers to the Division of Community Affairs, the Race Relations Unit, the Project Fund, the Church Urban Fund, possible conflicts between the last and the CRRU Projects Funds, about which 'fears were expressed' and 'anxieties remained'; and a rather nervous distinction was drawn between what were termed 'Black-led Churches' and 'mainstream Churches with black faces'. Dr Habgood, Archbishop of York, seems to have made an unfortunate speech exhorting the Assembly to 'crack racism' by trying to 'break it down into its compo- nent parts'; it was not 'racist', he said, 'to want to get down under this armour and break it down'. We must learn to live with `the glorious spectrum of our differences'. The Church Times commented sourly: `Many people in the Assembly did not appear to understand what the Archbishop was trying to say, and a few were offended by it.' Later there was a 'closely argued debate' on a report from the Women's Inter-Church Consultative Committee ab- out setting up a 'Woman's Resource Unit' and a Women's Desk'. Next year, you will be glad to hear, sees the start of the `Churches' Decade for Women'.

Bureaucratic committee-mongering has replaced theojogy as the principal activity of the modern clergy, at any rate to judge by the religious press. It is a formula for inevitable decline. There is much sneering at American television, which provides, according to the Tablet, 'lonely, isolated and unreflective people with immediate access to something which apes true com- munity, while relieving them of well over a billion dollars annually'. But it looks to me as though the British churches could do with a bit of popular appeal. As it is, they tend to fall back on that tired old device for attracting youth, the holy pop-group. The Catholic Herald features three women singers called Fascinating Aida, who belt out a lyric which goes, 'I'm mad about the Pontiff,/He makes my heart beat quicker,/I doubt if I could quantify/My feelings for that Vicar.' The Church of England News- paper tells us that a Christian rock gospel band from Ballymena, Split Level, is doing so well it has just signed a contract with `the world's largest gospel company, World Records', and is moving into the big time. The band's leader is quoted as saying, 'We believe God is calling us into a national and possibly international musical ministry and that necessitates basing ourselves in Lon- don.' No irony there, I think.

The one paper which does not look down its nose on American Bible Belt activities — indeed, it has a friendly report on the Revd Pat Robertson's presidential candidacy — is the Baptist Times. This is an old-fashioned religious weekly, evange- lical, god-fearing, Bible-bashing, prayer- ful, with only the slightest touch of the Nicaraguas. The Baptists seem to be the least unreconstructed of the main Christian groups. Their great effort at the moment is dispatching 100,000 Bibles to Soviet Rus- sia, apparently with Mr Gorbachev's bles- sing. I hope they are as splendid as the Bible I have just been sent, as an Easter present, by my religious friends in Dallas. It is in the King James version, is called the Ryrie Study Bible, and is the most beauti- ful Bible I have ever owned, as well as a fine work of scholarship. Incidentally, I have just looked up in it Leviticus 20:13. It reads: 'If a man also lie with mankind, as he lieth with a woman, both of them have committed an abomination: they shall surely be put to death.'