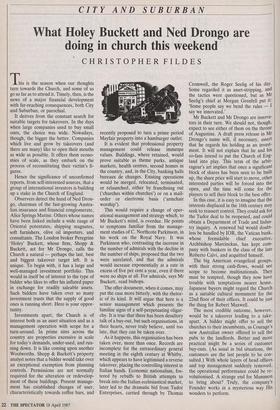 This is the season when our thoughts turn towards the Church, and some of us go so far as to attend it. Timely, then, is the news of a major financial development with far-reaching consequences, both City and Suburban, or parochial.

It derives from the constant search for suitable targets for takeovers. In the days when large companies used to buy small ones, the choice was wide. Nowadays, though, the bigger the better. Companies which live and grow by takeovers (and there are many) like to open their mouths as wide as possible. It offers them econo- mies of scale, as they embark on the process of reconstituting their victim's fi- gures.

Hence the significance of unconfirmed reports, from self-interested sources, that a group of international investors is building up a stake in the Church of England.

Observers detect the hand of Ned Dron- go, chairman of the fast-growing Austra- lian insurance and financial conglomerate, Alice Springs Marine. Others whose names have been linked include a wide range of Oriental potentates, shipping magnates, soft furnishers, olive oil importers, and consultants. The London broker Peregrine `Holey' Buckett, whose firm, Shopp & Buckett, act for Mr Drongo, calls the Church a natural — perhaps the last, best and biggest takeover target left. It is unique. To begin with, it has a large and well-managed investment portfolio. This would in itself be of interest to the type of bidder who likes to offer his inflated paper in exchange for readily saleable assets. Such bidders have taken over so many investment trusts that the supply of good ones is running short. Here is your oppor- tunity.

Investments apart, the Church is of interest both as an asset situation and as a management operation with scope for a turn-around. In prime sites across the country are properties excessive in scale , for today's demands, under-used, and run- ning down. It is like coming upon another Woolworths. Shopp & Buckett's property analyst notes that a bidder would take over an exceptional exemption from planning controls. Permissions are not normally required for the alteration or redevelop- ment of these buildings. Present manage- ment has established changes of user, characteristically towards coffee bars, and recently proposed to turn a prime period Mayfair property into a hamburger outlet.

It is evident that professional property management could release immense values. Buildings, where retained, would prove suitable as theme parks, antique markets, health centres, second homes in the country, and, in the City, banking halls bureaux de changes. Existing operations would be merged, relocated, terminated, or relaunched, either by franchising out (`churches within churches') or on a mail- order or electronic basis (`armchair worship').

This would require a change of oper- ational management and strategy which, to Mr Buckett's mind, is overdue. He points to symptoms familiar from the manage- ment studies of C. Northcote Parkinson, in his work on the Royal Navy. It was Parkinson who, contrasting the increase in the number of admirals with the decline in the number of ships, proposed that the two were unrelated, and that the admirals would increase exponentially at a rate in excess of five per cent a year, even if there were no ships at all. For admirals, says Mr Buckett, read bishops.

The offer document, when it comes, may put the case more bitterly, with the rhetor- ic of its kind. It will argue that here is a senior management which presents the familiar signs of a self-perpetuating oligar- chy. It is true that there has been desultory talk of a buy-out, but such organisations, in their hearts, never truly believe, until too late, that they can be taken over.

As it happens, this organisation has been taken over, more than once. Records are incomplete for the ,extraordinary general meeting in the eighth century at Whitby, which appears to have legitimised a reverse takeover, placing the controlling interest in Italian hands. Economic nationalism, fos- tered by rebuffs to British attempts to break into the Italian ecclesiastical market, later led to the dramatic bid from Tudor Enterprises, carried through by Thomas Cromwell, the Roger Seelig of his day. Some regarded it as asset-stripping, and the tactics were questioned, but as Mr Seelig's chief at Morgan Grenfell put it: `Some people say we bend the rules — say we innovated.'

Mr Buckett and Mr Drongo are innova- tors in their turn. We should not, though, expect to see either of them on the throne of Augustine. A draft press release in Mr Drongo's name will, if necessary, assert that he regards his holding as an invest- ment. It will not explain that he and his co-fans intend to put the Church of Eng- land into play. This term of the arbit- rageur's art implies that once a significant block of shares has been seen to be built up, the share price will start to move, other interested parties will be forced into the open, and the time will come for the players to sell their block to the best offer.

In this case, it is easy to imagine that the interests displaced in the 16th century may seek to reassert control. They could ask for the Tudor deal to be reopened, and could obtain a Department of Trade and Indus- try inquiry. A renewed bid would doubt- less be handled by IOR, the Vatican bank, whose formidable chief executive, Archbishop Marcinckus, has kept com- pany with bankers in the class of the late Roberto Calvi, and acquitted himself.

The big American evangelical groups, with their strong cash-flows, would see scope to become multinationals. They must be tempted, though they now have trouble with temptations nearer home. Japanese buyers might regard the Church as a suitable cultural monument for the 22nd floor of their offices. It could be just the thing for Robert Maxwell.

The most credible outcome, however, would be a takeover leading to a take- apart. A bidder might offer to sell the churches to their incumbents, as Courage's new Australian owner offered to sell the pubs to the landlords. Better and more practical might be a series of customer buy-outs. (As usual in bid situations, the customers are the last people to be con- sulted.) With whole layers of head offices and top management suddenly removed, the operational performance could be re- volutionised. A strange end for Mammon to bring about? Truly, the company's Founder works in a mysterious way His wonders to perform.