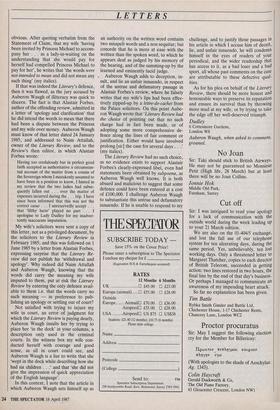 Sir: I was intrigued to read your apology for a lack of communication with the outside world during the week leading UP to your 21 March edition.

We are also on the 01-404/5 exchange, and lost the full use of our telephone system for ten ulcerating days, during the same period. Yes, unbelievably, ten lost working days. Only a threatened letter to Margaret Thatcher, copies to each director of British Telecom, succeeded in getting action: two lines restored in two hours, the final line by the end of that day's business. Or perhaps I managed to communicate an awareness of my impending heart attack.

So far no explanation has been given.