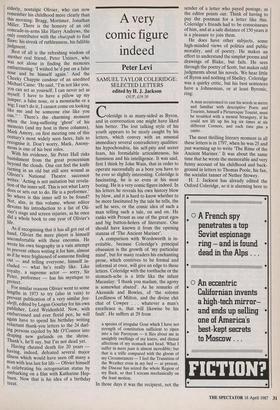 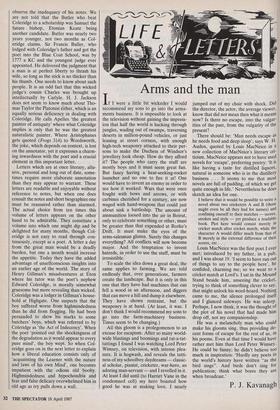 Coleridge is as many-sided as Byron, and in conversation one might have liked him better. The lost talking style of his youth appears to be nicely caught by his letters, which convey with an unusual immediacy several contradictory qualities: his hypochondria, his self-pity and secret fears, his formidable articulateness, his funniness and his intelligence. It was said, first I think by John Wain, that in order to operate successfully as a bore you have to be ever so slightly interesting. Coleridge is fascinating, he is so even at his most boring. He is a very comic figure indeed. In his letters he reveals his own history blow by blow, and it is hard to know whether to be more fascinated by the tale he tells, the self he sees, or the comic idea of such a man telling such a tale, on and on. He ranks with Proust as one of the great egos and big button-holers of literature. One should have known it from the opening stanzas of 'The Ancient Mariner'.

A comparison with Wordsworth is in- evitable, because Coleridge's principal obsession is the growth of 'my particular mind', but for many readers his enchanting prose, which contrives to be formal and informal at once, will give an edge to these letters. Coleridge with the toothache or the stomach-ache is a little like the infant Macaulay: 'I thank you madam, the agony is somewhat abated'. As he remarks of Akenside and Bowles, of 'the solemn Lordliness of Milton, and the divine chit chat of Cowper . . . whatever a man's excellence is, that will likewise be his fault'. He suffers at 29 from a species of irregular Gout which I have not strength of constitution sufficient to ripen into a fair Paroxysm — it flies about me in unsightly swellings of my knees, and dismal affections of my stomach and head. What I suffer in mere pain is almost incredible; but that is a trifle compared with the gloom of my Circumstances — I feel the Transition of the Weather even in my bed — at present, the Disease has seized the whole Region of my Back, so that I scream mechanically on the least motion.

In those days it was the recipient, not the sender of a letter who payed postage, as the editor points out. Think of having to pay the postman for a letter like this. Coleridge's friends had to be connoisseurs of him, and at a safe distance of 150 years it is a pleasure to join them.

He does have other subjects, some high-minded views of politics and public morality, and of poetry. He makes an effort to understand the simpler poems and drawings of Blake, but fails. He sees through the poetry of Scott, but makes odd judgments about his novels. We hear little of Byron and nothing of Shelley. Coleridge was a quirky critic, but his best sentences have a Johnsonian, or at least Byronic, ring:

A man accustomed to cast his words in metre and familiar with descriptive Poets and Tourists, himself a Picturesque Tourist, must be troubled with a mental Strangury, if he could not lift up his leg six times at six different Corners, and each time piss a canto.

The most thrilling literary moment in all these letters is in 1797, when he was 25 and just warming up to write 'The Rime of the Ancient Mariner.' It was about the same time that he wrote the memorable and very funny account of his childhood and back- ground in letters to Thomas Poole, his fan, the socialist tanner of Nether Stowey.

H. J. Jackson has already edited the Oxford Coleridge, so it is alarming here to observe the inadequacy of his notes. We are not told that the Butler who beat Coleridge to a scholarship was Samuel the future bishop, Etonian Keate being another candidate. Butler was nearly two years younger, not two months as Col- eridge claims. Sir Francis Buller, who lodged with Coleridge's father and got the poet into the Blue Coat School, was by 1777 a KC and the youngest judge ever appointed. He delivered the judgment that a man is at perfect liberty to thrash his wife, so long as the stick is no thicker than his thumb. One needs to know about such people. It is an odd fact that this wicked judge's cousin Charles was brought up intellectually by Carlyle. H. J. Jackson does not seem to know much about Tho- mas Taylor the Platonist either, which is an equally serious deficiency in dealing with Coleridge. He calls Apelles 'the greatest painter of antiquity' where what Coleridge implies is only that he was the greatest naturalistic painter. Where tristophanes gets quoted (Frogs 314) to Wordsworth, the joke, which depends on context, is lost on the annotator, yet it expresses a charm- ing inwardness with the poet and a crucial element in this important letter.

Letters which are at once literary, allu- sive, personal and long out of date, some- times require more elaborate annotation than they may appear to warrant. These letters are readable and enjoyable without reference to notes, but when one does consult the notes and short biographies one must be reassured rather than alarmed.. The actual choice from ten times this volume of letters appears on the other hand to be admirable. They constitute a volume into which one might dip and be delighted for many. months, though Col- eridge is not easy to read through con- tinuously, except as a poet. A letter a day from the great man would be a deadly burden, but one a month would increase the appetite. Today they have the added advantage of unselfconscious insights into an earlier age of the world. The story of Henry Gillman's misadventures at Eton where his tutor was the poet's nephew Edward Coleridge, is morally somewhat gruesome but more revealing than wicked. Coleridge was a lodger in Gillman's house- hold at Highgate. One suspects that the boy suffered worse from highmindedness than he did from flogging. He had been persuaded to show his marks to some butchers' boys, which was referred to by Coleridge as 'the Act of Indecency'. When the poet 'pointed out the shockingness of the degradation as it would appear to every pure mind', the boy wept. So when Col- eridge goes on in the next letter to explain how a liberal education consists only of `acquainting the Learner with the nature and laws of his own Mind', one becomes impatient with the odious old booby. Highmindedness and hypochondria and fear and false delicacy overwhelmed him in old age as ivy pulls down a wall.