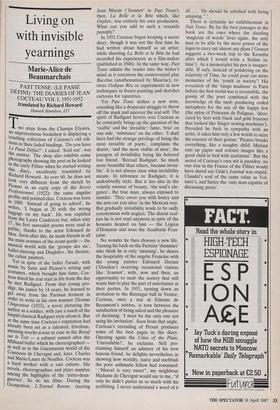 Living on with invisible

T" steps from the Champs Elysees, an unpretentious bookshop is displaying a touching collection of Cocteau's old edi- tions in their faded bindings. Do you have Le Passe Defini?', I asked. 'Sold out', was the answer. The shop also exhibits some Photographs showing the poet as he looked in.the early Fifties when he started writing this diary, excellently translated by Richard Howard. At over 60, he does not look very different from the sketch by Picasso in an early copy of the Secret Professionnel (1922): the same angular profile and pointed chin. Cocteau was born in .1889. 'Instead of going to school', he Writes, 'I began at 20 with the wrong luggage on my back'. He was expelled from the Lycee Condorcet but, when only 17, his first surrealist poems were read in Public, thanks to the actor Edouard de Max. Soon after this, he made friends in all the main avenues of the avant-garde — the musical world with the `groupe des six', ballet-dancing and Diaghilev, the theatre, the cubist painters. Yet in spite of the ballet Parade, with music by Satie and Picasso's setting and costumes, which brought him fame, Coc- teau dated his real start in life from the day he met Radiguet. From that young pro- digy, his junior by 14 years, he learned to get away from the Parisian ferment in order to write in his own manner Thomas 1 Imposteur (1923), a novel picturing the author as a soldier, with just a touch of the limpid classical Radiguet style about it. But at the same time Cocteau's reputation had already been set as a talented, frivolous, amusing touche-a-tout at ease in the Boeuf sur le Toit — a cabaret named after the Milhaud ballet which he choreographed as well as in the Guermantes world of the Comtesse de Chevigne and, later, Charles and Marie-Laure de Noailles. Cocteau was a hard worker with a vast culture. His novels, choreographies and plays number among the highlights of the 'entre-deux- guerres'. So do his films. During the Occupation, L'Eternel Retour, starring Jean Marais (leannoe in Past Tense); then, La Belle et la Bete which, like Orphee, was entirely his own production. What can you add to such a versatile panoply?

In 1951 Cocteau began keeping a secret diary, though it was not the first time he had written about himself as an artist: while shooting La Belle et la Bete he had recorded his experiences as a film-maker (published in 1946). In the same way, Past Tense admits the reader into the writer's mind as it conceives the controversial play Bacchus (anathematised by Mauriac), re- vives Oedipus Rex or experiments in new techniques in fresco-painting and sketches cartoons for tapestries.

Yet Past Tense strikes a new note, sounding like a desperate struggle to throw off the mask and uncover the real self. The spirit of Radiguet hovers over Cocteau as he constantly brings up the question of the `visible' and the 'invisible': fame, 'brio' on one side, 'substance' on the other. 'I shall have had the strange privilege of being the most invisible of poets', complains the diarist, 'and the most visible of men', the paragon of invisibility being his beloved lost friend. 'Reread Radiguet. So much more beautiful than others, because invisi- ble'. It is not always clear what invisibility means. In reference to Radiguet, it is undoubtedly style. But it lies also in the volatile essence of beauty, 'the soul's ele- gance', the true man, always exposed to slander: 'They cover you with honey and the ants eat you alive' in the Mexican way. But gradually invisibility tends to be sadly synonymous with neglect. The diarist real- ises he is not read anymore in spite of the honours heaped on him — the Legion d'Honneur and soon the Academie Fran- gaise.

No wonder he then chooses a new life. Turning his back on the Parisian 'dummies' who think he is only 'amusing', he shares the hospitality of the angelic Francine with the young painter Edouard Dermit (`Doudou) receiving occasional visitors like `Jeannot', with, now and then, an opportunity to snub the society that still wants him to play the part of entertainer at their parties. In 1951, turning down an invitation to the Beistegui ball in Venice, Cocteau, once a star at Etienne de Beaumont's soirees, is torn between the satisfaction of being asked and the pleasure of declining: `I must be the only one not using his invitation'. Seen from that angle, Cocteau's rereading of Proust produces some of the best pages in the diary. Opening again the Cities of the Plain, `Unreadable!', he exclaims. Still pro- claiming himself an admirer of his now famous friend, he delights nevertheless in showing how worldly, naïve and snobbish the poor asthmatic fellow had remained: ."Marcel is very sweet", my neighbour Madame de Chevigne would say to me, "if only he didn't pester us so much with his scribbling. I never understand a word of it all . . . He should be satisfied with being amusing." ' There is certainly no exhibitionism in Past Tense. By far the best passages in the book are the ones where the dazzling `magician of words' lives again, the only man to be able by the mere power of the logos to carry out almost any plans (`Grasset suggests a two-week trip to the Kremlin after which I would write a Staline in- time'). As a memorialist his pen is insuper- able. If only, instead of pondering on the relativity of Time, he could pour out more memories of his 'youth in society'! His evocation of the 'tango madness' in Paris before the first world war is irresistible, the gossip of the poet combined with the knowledge of the snob producing coded metaphors for the use of the happy few (the salon of Princesse de Polignac, 'deco- rated by Sert with black and gold frescoes that looked like Singer sewing-machines'). Provided he feels in sympathy with an artist, it takes him only a few words to seize the essence of their genius: 'Picasso breaks everything, like a naughty child. Matisse cuts up paper and colours images like a good child in bed with scarlatina'. But the secret of Cocteau's own wit is paradox: no one else in the France of the Fifties would have dared say Gide's Journal was stupid, Claudel's soul of the same value as Vol- taire's, and Sartre the 'only man capable of discussing poets'.