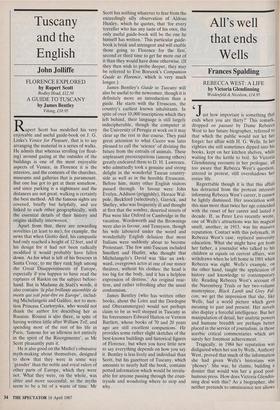 Tuscany and the English

A GUIDE TO TUSCANY by James Bentley

Rupert Scott has modelled his very enjoyable and useful guide-book on J. G. Links's Venice for Pleasure, that is to say arranging the material in a series of walks. He admits that whereas strolling (or float- ing) around gazing at the outsides of the buildings is one of the most enjoyable aspects of Venice, in Florence it is the interiors, and the contents of the churches, museums and galleries that is paramount. But one has got to get at them somehow, and since parking is a nightmare and the distances are not great, walking is certainly the best method. All the famous sights are covered, briefly but helpfully, and are linked to each other geographically, with the essential details of their history and origins skilfully interwoven.

Apart from that, there are rewarding novelties (at least to me); for example, the news that when Giotto died, his campanile had only reached a height of 12 feet, and if his design for it had not been radically modified it would probably have fallen down. As for what is left of his frescoes in Santa Croce, to me they rank high among the Great Disappointments of Europe, especially if you happen to have read the raptures of Ruskin on the subject before- hand. But in Madame de Stael's words, it also contains `la plus brillante assemblee de morts qui soft peut-titre en Europe', includ- ing Michelangelo and Galileo, not to men- tion Princess Czartoryska, who would not thank the author for describing her as Russian. Rossini is also there, in spite of having written little after William Tell, and spending most of the rest of his life in Paris, 'famous for an idleness not entirely in the spirit of the Risorgimento', as Mr Scott pleasantly puts it.

He is also good on the Medici's obsessive myth-making about themselves, designed to show that they were in some way 'grander' than the noble and royal rulers of other parts of Europe, which they were not. What they were, on the whole, was abler and more successful, so the myths seem to be a bit of a waste of time. Mr Scott has nothing whatever to fear from the exceedingly silly observation of Aldous Huxley, which he quotes, that 'for every traveller who has any taste of his own, the only useful guide-book will be the one he himself has written.' This particular guide- book is brisk and astringent and will enable those going to Florence for the first, second or third time to get far more out of it than they would have done otherwise. (If they then wish to probe deeper, they may be referred to Eve Borsook's Companion Guide to Florence, which is very much longer.) James Bentley's Guide to Tuscany will also be useful to the newcomer, though it is definitely more an introduction than a guide. He starts with the Etruscans, the country's earliest known inhabitants. In spite of over 10,000 inscriptions which they left behind, their language is still largely indecipherable, though the computer at the University of Perugia at work on it may clear up the rest in due course. They paid great attention to what Cicero was later pleased to call the 'science' of divining the future from the entrails of animals. These unpleasant preoccupations (among others) greatly endeared them to D. H. Lawrence, who admittedly took a genuine and strong delight in the wonderful Tuscan country- side as well as in the horrible Etruscans. Before him, many other English visitors passed through. In favour were John Evelyn, Addison (priggishly), Horace Wal- pole, Beckford (selectively), Garrick, and Shelley, who was frequently ill and thought at first that the sombre, deserted streets of Pisa were like Oxford or Cambridge in the vacation. Wordsworth and the Brownings were also in favour, and Tennyson, though his wife laboured under the -weird and wonderfully English delusion that most Italians were suddenly about to become Protestant. The few anti-Tuscans included Smollett and Hazlitt, who thought that Michelangelo's David was 'like an awk- ward, overgrown actor at one of our minor theatres, withoin his clothes: the head is too big for the body, and it has a helpless expression of distress.' An original reac- tion, and rather refreshing after the usual conformism.

James Bentley (who has written other books, about the Loire and the Dordogne and Oberammergau) would not perhaps claim to be as well steeped in Tuscany as his forerunners Edward Hutton or Vernon Bartlett, whose books of 70 and 20 years ago are still excellent companions. He provides some rather slight sketches of the best-known buildings and historical figures of Florence, but when you have little new to say everything depends on how you say it. Bentley is less lively and individual than Scott, but his gazetteer of Tuscany, which amounts to nearly half the book, contains potted information which would be invalu- able for anyone passing through the coun- tryside and wondering where to stop and why.