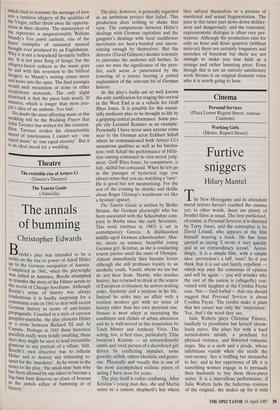 The annals of bumming

satire on the rise to power of Adolf Hitler up to the German occupation of Austria. Completed in 1941, when the playwright was exiled in America, Brecht attempted to transfer the story of the Fiihrer across to the world of Chicago hoodlums. Although Brecht's sense of history was always tendentious it is hardly surprising for a Communist exile in 1941 to deal with recent German history in terms of anti-fascist Propaganda. Couched in a style of cartoon gangster-pastiche, the play presents Hitler as a cross between Richard III and Al Capone. Perhaps in 1941 these historical parallels really were boldly insulting; these days they might be seen to lend irresistible glamour to any portrait of a villain. Still, Brecht's own objective was to ridicule Hitler and to destroy any remaining re- spect for the 'murderer'. As he wrote in the notes to the play, 'the small-time bum who has been allowed by our rulers to become a big-time bum deserves no place of honour in the annals either of bumming or of history.' The play, however, is generally regarded as an ambitious project that failed. This production does nothing to shake that view. The comparisons between Hitler's dealings with German capitalists and the gangster's dealings with local cauliflower merchants are heavy-handed and uncon- vincing enough by themselves. But the director (David Gilmore) decides solemnly to patronise the audience still further. In case we miss the significance of the para- llel, each scene is punctuated by the lowering of a screen bearing a potted explanation of the relevant bit of German history.

As the play's faults are so well known the only justification for staging this revival in the West End is as a vehicle for Griff Rhys Jones. It is possible for this essent- ially medicore play to be brought to life by a gripping central performance. Some peo- ple cite Leonard Rossiter as an example. Personally I have never seen anyone come near to the German actor Eckhart Schall where he communicated both Arturo Ui's monstrous qualities as well as his fascina- tion; with Schall the performance of Hitle- rian ranting contained its own moral judg- ment, Griff Rhys Jones, by comparison, is tidy, skilful but contained. When he lets go in the passages of hysterical rage you always sense that you are watching a 'turn'. He is good but not mesmerising. For the rest of the evening he shrinks and skulks about Roger Glossop's warehouse set like a hesitant upstart.

The Tourist Guide is written by Botho Strauss, the German playwright who has been associated with the Schaubuhne com- pany in Berlin since the early Seventies. This work (written in 1985) is set in contemporary Greece. A disillusioned middle-aged German schoolteacher, Mar- tin, meets an earnest, beautiful young German girl, Kristine, as she is conducting tourist parties amid the ruins of Olympia. Almost immediately they become lovers although she still professes loyalty to an alcoholic youth, Vassili, whom we see but do not hear from. Martin, who teaches history, has returned to drink at the source of European civilisation; he arrives seeking order, harmony and a purpose in his life. Instead he sinks into an affair with a rootless modern girl with no sense of history other than her own personal one. Strauss is most adept at recreating the conditions and clichés of urban alienation and he is well-served in this translation by Tinch Minter and Anthony Vivis. The acting, too, is first class, particularly Tilda Swinton's Kristine — an extraordinarily subtle and vivid picture of a disordered girl driven by conflicting impulses, some greedily selfish, others idealistic and gener- ous. Physically and vocally this is one of the most accomplished realistic pieces of acting I have seen for years.

The play itself is rather confusing. After Kristine's young man dies, she and Martin retire to a remote shepherd's but where they subject themselves to a process of emotional and sexual fragmentation. The pace in this latter part slows down deliber- ately and dangerously, and the truncated, expressionistic dialogue is often very por- tentous. Although the production runs for only an hour and three quarters (without interval) there are certainly longueurs and stretches of boredom but these are not enough to make you lose faith in a strange and rather haunting piece. Even though this is not an entirely satisfactory work Strauss is an original dramatic voice who it is worth going to hear.