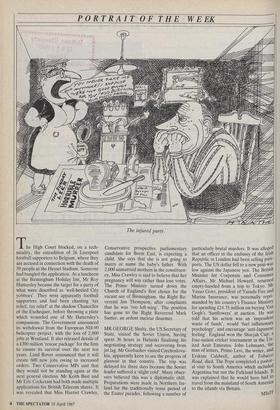 The High Court blocked, on a tech- nicality, the extradition of 26 Liverpool football supporters to Belgium, where they are accused in connection with the death of 39 people at the Heysel Stadium. Someone had bungled the application. At a luncheon at the Birmingham Holiday Inn, Mr Roy Hattersley became the target for a party of what were described as 'well-heeled City yobboes'. They were apparently football supporters and had been chanting 'tax relief, tax relief at the shadow Chancellor of the Exchequer, before throwing a plate which wounded one of Mr Hattersley's companions. The Government announced its withdrawal from the European NH-90 helicopter project, with the loss of 2,000 jobs at Westland. It also released details of a £300 million 'rescue package' for the firm to ensure its survival over the next ten years. Land Rover announced that it will create 600 new jobs owing to increased orders. Two Conservative MPs said that they would not be standing again at the next general election. Mr Keith Best and Mr Eric Cockerarn had both made multiple applications for British Telecom shares. It was revealed that Miss Harriet Crawley, Conservative prospective parliamentary candidate for Brent East, is expecting a child. She says that she is not going to marry or name the baby's father. With 2,000 unmarried mothers in the constituen- cy, Miss Crawley is said to believe that her pregnancy will win rather than lose votes. The Prime Minister turned down the Church of England's first choice for the vacant see of Birmingham, the Right Re- verend Jim Thompson, after complaints that he was `too left-wing'. The position has gone to the Right Reverend Mark Santer, an ardent nuclear disarmer.

MR GEORGE Shultz, the US Secretary of State, visited the Soviet Union, having spent 36 hours in Helsinki finalising his negotiating strategy and recovering from jet lag. Mr Gorbachev visited Czechoslova- kia, apparently keen to see the progress of glasnost in that country. The trip was delayed for three days because the Soviet leader suffered a `slight cold'. Many obser- vers believed this was a diplomatic chill. Preparations were made in Northern Ire- land for the traditionally tense period of the Easter parades, following a number of particularly brutal murders. It was alleged that an officer in the embassy of the Irish Republic in London had been selling pass- ports. The US dollar fell to a new post-war low against the Japanese yen. The British Minister for Corporate and Consumer Affairs, Mr Michael Howard, returned empty-handed from a trip to Tokyo. Mr Yasuo Goto, president of Yasuda Fire and Marine Insurance, was personally repri- manded by his country's Finance Ministry for spending £24.75 million on buying Van Gogh's 'Sunflowers' at auction. He was told that his action was an 'imprudent waste of funds', would 'fuel inflationary psychology', and encourage 'anti-Japanese feeling'. England won the Sharjah cup, a four-nation cricket tournament in the Un- ited Arab Emirates. John Lehmann, the man of letters, Primo Levi, the writer, and Erskine Caldwell, author of Tobacco Road, died. The Pope completed a pastor- al visit to South America which included Argentina but not the Falkland Islands. It was explained that he would have had to travel from the mainland of South America to the islands via Britain. MStJT