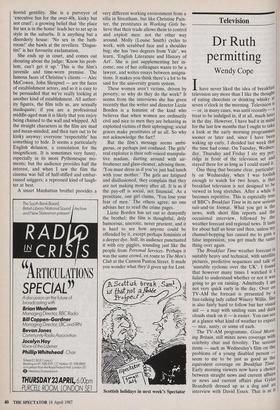 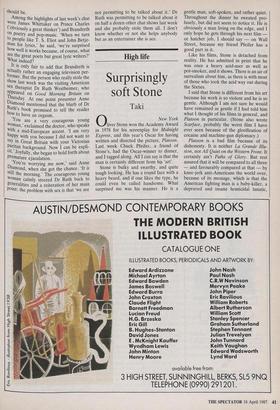 Ihave never liked the idea of breakfast television any more than I like the thought of eating chocolate or drinking whisky at seven o'clock in the morning. Television Is — or, in many cases, was until recently— a treat to be indulged in, if at all, much later in the day. However, I have had it in mind for the last few months that I ought to take a look at the early morning programmes sooner or later and, since I have been waking up early, I decided last week that the time had come. On Tuesday, Wednes- day, Thursday and Friday I ate my por- ridge in front of the television set and stayed there for as long as I could stand it.

One thing that became clear, particular- ly on Wednesday, when I was foolish enough to watch for two hours, is that breakfast television is not designed to be viewed in long stretches. After a while it becomes repetitive. This is especially true of BBC's Breakfast Time in its new serious suit-and-tie format. What you get is the news, with short film reports and the occasional interview, followed by the weather forecast and regional news. It lasts for about half an hour and then, unless MY channel-hopping has caused me to gain a false impression, you get much the same thing over again. The Breakfast Time weather forecast is suitably heavy and technical, with satellite pictures, predictive sequences and talk of 'unstable cyclonic over the UK'. I found that however many times I watched it I failed to understand whether or not it was going to go on raining. Admittedly I am not very quick early in the day. Over on TV-AM the forecast is presented by a fast-talking lady called Wincey Willis. She is also fairly hard to follow but her visual aid — a map with smiling suns and dark clouds stuck on it — is easier. You can see at a glance what kind of weather to expect — nice, nasty, or some of each.

The TV-AM programme, Good Morn- ing Britain, still mixes news coverage with celebrity chat and frivolity. The serious items — such as Wednesday's film on the problems of a young disabled person --- seem to me to be just as good as the equivalent coverage on Breakfast Time. Early morning viewers now have a choice between straight news and current affairs or news and current affairs plus GYlea Brandreth dressed up as a dog and an interview with David Essex. That is as It

Among the highlights of last week's chat were James Whittaker on Prince Charles (`obviously a great thinker') and Brandreth on poetry and pop-music. 'When we turn to people like T. S. Eliot and John Betje- man for lyrics,' he said, 'we're surprised how well it works because, of course, what are the great poets but great lyric writers?' What indeed? It is only fair to add that Brandreth is actually rather an engaging television per- former. But the person who really stole the show last week was the visiting American sex therapist Dr Ruth Westheimer, who appeared on Good Morning Britain on Thursday. At one point presenter Anne Diamond mentioned that the blurb of Dr Ruth's book promised to tell the reader how to have an orgasm. `You are a very courageous young woman,' exclaimed the doctor, who speaks with a mid-European accent. 'I am very happy with you because I did not want to say in Great Britain with your Victorian puritan background. Now I can be expli- cit.' Joyfully, she began to hold forth about premature ejaculation. You're worrying me now,' said Anne Diamond, when she got the chance. 'It is still the morning.' The courageous young woman calmly steered Dr Ruth back to generalities and a reiteration of her main point: the problem with sex is that 'we are not permitting to be talked about it.' Dr Ruth was permitting to be talked about it on half a dozen other chat shows last week and she probably stole them all. I don't know whether or not she helps anybody but as an entertainer she is ace.