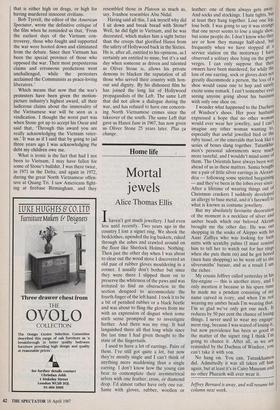 Ihaven't got much jewellery. I had even less until recently. Two years ago in the country I lost a signet ring. We shook the bedclothes, upended the log baskets, raked through the ashes and crawled around on the floor like Sherlock Holmes. Nothing. Then just the other day when I was about to clear out the wood stove I discovered an old pair of rubber gloves mouldering in a corner. I usually don't bother but since they were there I slipped them on to preserve the whiteness of the paws and was irritated to find an obstruction in the section designed to accommodate the fourth finger of the left hand. I took it to be a bit of perished rubber or a black beetle and was about to fling the gloves from me with an expression of disgust when some sixth sense prompted me to investigate further. And there was my ring. It had languished there all that long while since the last time I had given thought to the state of the fingernails.

I used to have a lot of earrings. Pairs of them. I've still got quite a lot, but now they're mostly single and I can't think of anything more maddening than a single earring. I don't know how the young can bear to contemplate their asymmetrical selves with one feather, cross, or diamond drop. I'd almost rather have only one ear. Same with gloves, rubber, woollen or leather: one of them always gets away And socks and stockings. I hate tights, but at least they hang together. Lose one leg, lose both. I was going to say it was strange that one never seems to lose a single shoe, but some people do. I don't know who they are or how they manage half-shod, but frequently when we have stopped at a service station on the motorway I have observed a solitary shoe lying on the grass verges. I can only suppose that their owners have been murdered, for while the loss of one earring, sock or gloves does not greatly discommode a person, the loss of a shoe would cause one to hop and surely excite some remark. I can't remember ever seeing anyone going about his business with only one shoe on. I wonder what happened to the Duchess of Windsor's shoes. Her poor husband expressed a hope that no other woman would ever wear her jewellry, and I can t imagine any other woman wanting to, especially that awful jewelled bird or the ruby tassel, or the emeralds that look like a series of boxes slung together. Tutankha- men's personal adornments were much more tasteful, and I wouldn't mind some of them. The Orientals have always been waY ahead of us in these matters. Samia bought me a pair of little silver earrings in Alexan- dria — following some spirited bargaining — and they've been in the lobes ever since- After a lifetime of wearing things out of Christmas crackers I suddenly developed an allergy to base metal, and it's farewell to what is known as costume jewellery. But my absolutely favourite decoration of the moment is a necklace of silver and amber beads which our beloved Akram brought me the other day. He was out shopping in the souks of Aleppo with his Aunt Zaffiya who was looking for bath mitts with scratchy palms (I must remind him to tell her to watch out for her rings when she puts them on) and he got bored (men hate shopping) so he went off to the silversmiths' bazaar, and as a result I aril the richer.

My cousin Jeffrey called yesterday in his fire-engine — this is another story, and I only mention it because in his spare time he made me a pendant consisting of my name carved in ivory, and when I'm not wearing my amber beads I'm wearing that. I'm so glad we've only got one neck. It reduces by 50 per cent the chance of losing things. I never used to wear my engage- ment ring, because I was scared of losing it, but now providence has been so good 10 the matter of the signet ring I think I'm going to chance it. After all, as we are reminded by the Duchess of Windsor, you can't take it with you.

No hang on. You can. Tutankhamen did. Admittedly it was all taken off him again, but at least it's in Cairo Museum and no other Pharaoh will ever wear it.