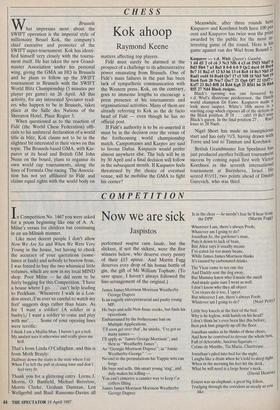 Brussels hathat impresses most about the SWIFT operation is the imperial style of millionaire Bessel Kok, the company's chief executive and promoter of the SWIFT super-tournament. Kok has identi- fied himself very closely with the tourna- ment itself. He has taken the new Grand- master Association. under his personal wing, giving the GMA an HQ in Brussels and he plans to follow up the SWIFT tournament in Brussels with the SWIFT World Blitz Championship (5 minutes per player per game) on 26 April. All this activity, for any interested Spectator read- ers who happen to be in Brussels, takes place at the Salle des Nations of the Sheraton Hotel, Place Rogier 3.

When questioned as to the reaction of Fide (the World Chess Federation) offi- cials to his unilateral declaration of a world title in blitz, Kok claims not to be in the slightest bit interested in their views on this topic. The Brussels-based GMA, with Kas- parov at its head and British GM John Nunn on the board, plans to organise its own world cup tournaments, along the lines of Formula One racing. The Associa- tion has not yet affiliated to Fide and claims equal rights with the world body on matters affecting top players.

Fide must surely be alarmed at the prospect of a challenge to its administrative power emanating from Brussels. One of Fide's main failures in the past has been lack of sympathetic communication with the Western piess. Kok, on the contrary, goes to immense lengths to encourage a press presence at his tournaments and organisational activities. Many of them are already referring to Kok as the de facto head of Fide — even though he has no official post.

If Fide's authority is to be re-asserted it must be in the decision over the venue of the forthcoming world championship match. Campomanes and Karpov are said to favour Dubai. Kasparov would prefer almost anywhere else. The bids will be in by 30 April and a final decision will follow in the subsequent month. If Kasparov feels threatened by the choice of eventual venue, will he mobilise the GMA to fight his corner? Meanwhile, after three rounds here Kasparov and Korchnoi both have 100 Per cent and Kasparov has twice won the prize awarded by the public for the most in- teresting game of the round. Here is his game against van der Wiel from Round 2.

Nigel Short has made an inauspicious start and has only 1/2/3, having drawn with Torre and lost to Timman and Korchnoi. British Grandmaster Jon Speelman has

just produced another brilliant tournament success by coming equal first with Victor Korchnoi in the seventh international tournament at Beersheva, Israel. He scored 81/2/11, two points ahead of Dmitri

Gurevich, who was third.