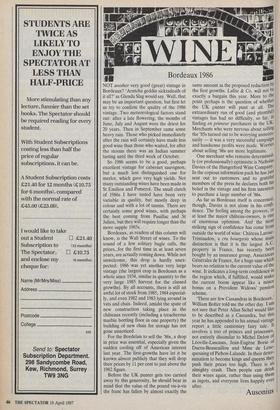 NOT another very good (great) vintage in Bordeaux? `Amtcha geddin sicktadeath of it all?' as Glenda Slag would say. Well, that may be an important question, but first let us try to confirm the quality of the 1986 vintage. Two meteorological factors stand out: after a late flowering, the months of June, July and August were the driest for 20 years. Then in September came some heavy rain. Those who picked immediately after the rain will certainly have made less good wine than those who waited, for after the storms there was an Indian summer lasting until the third week of October.

So 1986 seems to be a good, perhaps excellent vintage for cabernet sauvignon, but a much less distinguished one for merlot, which gave very high yields. Not many outstanding wines have been made in St Emilion and Pomerol. The small clutch of 1986s I have tasted have been very variable in quality, but mostly deep in colour and with a lot of tannin. There are certainly some good wines, with perhaps the best coming from Pauillac and St Julien, but they will require longer than the more supple 1985s.

Bordeaux, as readers of this column will know, is the Wall Street of wines. To the sound of a few solitary bugle calls, the prices, .for the first time in at least seven years, are actually coming down. While not unwelcome, this drop is hardly unex- pected: 1986 was yet another very large vintage (the largest crop in Bordeaux as a whole since 1934, similar in quantity to the very large 1985 harvest for the classed growths). By all accounts, there is still an awful lot of stock from 1985, 1984 especial- ly, and even 1982 and 1983 lying around in vats and chais. Indeed, amidst the spate of new construction taking place in the châteaux recently (including a treacherous marble bottling floor in one property) the building of new chais for storage has not gone unnoticed.

For the Bordelais to sell the '86s, a drop in price was essential, especially given the sudden cooling off of American interest last year. The first-growths have let it be known almost publicly that they will drop their prices by 11 per cent to just above the 1982 figure.

Before the UK punter gets too carried away by this generosity, he should bear in mind that the value of the pound vis-à-vis the franc has fallen by almost exactly the same amount as the proposed reduction by the first growths. Lafite & Co. will not be exactly a bargain this year. More to the point perhaps is the question of whether the UK punter will punt at all. The extraordinary run of good (and plentiful) vintages has had no difficulty, so far, in finding en prirneur purchasers in the UI(' Merchants who were nervous about selling the '85s turned out to be worrying unneces- sarily — it was a very successful campaign and handsome profits were made. Worries about selling '86s are more legitimate. One merchant who remains determined- ly (or professionally) optimistic is Nicholas Davies of the Hungerford Wine Company. In the copious information pack he has just sent out to customers and to grateful members of the press he declares both his belief in the vintage and his firm intention to purchase a large number of '86s. As far as Bordeaux itself is concerned, though, Davies is not alone in his confi- dence. The feeling among the growers, or at least the major château-owners, is one of enormous optimism. And the most striking sign of confidence has come from outside the world of wine: Château Larose- Trintaudon, a cru bourgeois whose main distinction is that it is the largest A.C. property in France, has recently been bought by an insurance group, Assurances Generates de France, for a huge sum which bears no relation to the current value of the wine. It indicates a long-term confidence in the region which, if fulfilled, would make the current boom appear like a minor bonus on a Provident Widows' pension scheme.

`There are few Cassandras in Bordeaux, William Bolter told me the other day. I am not sure that Peter Allan Sichel would like to be described as a Cassandra, but this year he has appended to his annual vintage report a little cautionary fairy tale. It involves a trio of princes and princesses, not entirely dissimilar to Michel Delon of Leoville-Lascases, Jean-Eugene Borie of Ducru-Beaucaillou and Mme de Lenc- quesaing of Pichon-Lalande. In their deter- mination to become kings and queens they push their prices too high. There is an almighty crash. Then people can drink their wines again, rather than using them as ingots, and everyone lives happily ever after.