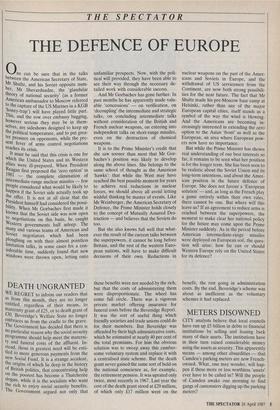 THE DEFENCE OF EUROPE

It must be said that this crisis is one for Which the United States and its Western allies were ill-prepared. When President Reagan first proposed the 'zero option' in 1981 — the complete elimination of intermediate-range nuclear missiles — few People considered what would be likely to happen if the Soviet side actually took up the offer. It is not at all clear that the President himself had considered the possi- bility. When Mr Gorbachev first made it known that the Soviet side was now open to negotiations on this basis, he caught Western governments half asleep. The many and various teams of American and Soviet negotiators which had been ploughing on with their almost pointless limitation talks, in some cases for a con- siderable time, suddenly found that new windows were thrown open, letting onto unfamiliar prospects. Now, with the poli- tical will provided, they have been able to see their way through the necessary de- tailed work with considerable success. And Mr Gorbachev has gone further. In past months he has apparently made valu- able 'concessions' — on verification, on `clecoupling' the intermediate and strategic talks, on concluding intermediate talks without consideration of the British and French nuclear weapons, on entering into independent talks on short-range missiles, even on the destruction of chemical weapons. It is to the Prime Minister's credit that she saw sooner than most that Mr Gor- bachev's position was likely to develop along the above lines. She belongs to the same school of thought as the American `hawks': that while the West may have reached the best possible moment for years to achieve real reductions in nuclear forces, we should above all avoid letting wishful thinking be master of events. Like Mr Weinberger, the American Secretary of Defence, the Prime Minister holds closely to the concept of Mutually Assured Des- truction — and believes that the Soviets do too. But she also knows full well that what- ever the result of the current talks between the superpowers, it cannot be long before Britain, and the rest of the western Euro- pean nations, will have to make difficult decisions of their own. Reductions in nuclear weapons on the part of the Amer- icans and Soviets in Europe, and the withdrawal of US servicemen from the Continent, are now both strong possibili- ties for the near future. The fact that Mr Shultz made his pre-Moscow base camp at Helsinki, rather than any of the major European capital cities, itself stands as a symbol of the way the wind is blowing. And the Americans are becoming in- creasingly interested in extending the zero option to the Asian 'front' as well as the European, an area where European pow- ers now have no importance. But while the Prime Minister has shown real understanding of our best interests so far, it remains to be seen what her position is for the longer term. She has been seen to be realistic about the Soviet Union and its long-term intentions, and about the Amer- ican position in the future defence of Europe. She does not favour a 'European solution' — and, as long as the French play a game entirely within their own rules, there cannot be one. But where will this leave us? If an agreement to reduce arms is reached between the superpowers, the moment to make clear her national policy for the future may come upon the Prime Minister suddenly. As in the period before American intermediate-range missiles were deployed on European soil, the ques- tion will arise: how far can or should Western Europe rely on the United States for its defence?