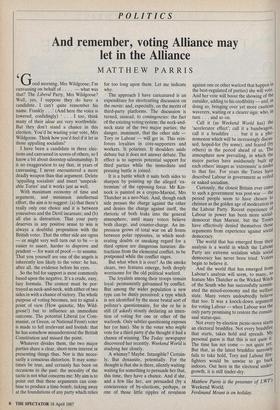 And remember, voting Alliance may let in the Alliance

ood morning, Mrs Wildgoose; I'm canvassing on behalf of . . . . — what was that? The Liberal Party, Mrs Wildgoose? Well, yes, I suppose they do have a candidate. I can't quite remember his name. Frankly . . .' (And here the voice is lowered, confidingly) ` . . . I too, think many of their ideas are very worthwhile. But they don't stand a chance in this election. You'd be wasting your vote, Mrs Wildgoose. Think how you'd feel if it let in those appalling socialists!'

I have been a candidate in three elec- tions and canvassed in scores of others, so I know a bit about doorstep salesmanship. It is no exaggeration to say that, in years of canvassing, I never encountered a more deadly weapon than that argument. Delete `appalling socialists' and insert `unspeak- able Tories' and it works just as well.

With maximum economy of time and argument, and minimum intellectual effort, the aim is to suggest: (a) that there's really only one choice and it is between yourselves and the Devil incarnate; and (b) all else is distraction. That your party deserves in any positive sense to win is always a doubtful proposition with the British voter. That the other side are ogres — or might very well turn out to be — is easier to assert, harder to disprove and prudent — for want of proof — to assume. That you yourself are one of the angels is inherently less likely to the voter: he has, after all, the evidence before his eyes.

So the bid for support is most commonly based upon the negative. It's a crude, easy, lazy formula. The contest must be por- trayed as neck-and-neck, with either of two sides in with a chance of victory. The whole purpose of voting becomes, not to signal a point of view (How quixotic, Mrs Wild- goose!) but to influence an immediate outcome. The potential Liberal (or Com- munist, or Green, or National Front) voter is made to fell irrelevant and foolish: that he has somehow misunderstood the British Constitution and missed the point.

Whatever divides them, the two major parties share a clear, short-term interest in presenting things thus. Nor is this neces- sarily a conscious distortion. It may some- times be true, and certainly has been on occasions in the past: the morality of the tactic is not what concerns me: My aim is to point out that these arguments can com- bine to produce a time-bomb, ticking away at the foundations of any party which relies for too long upon them. Let me indicate why.

The approach I have caricatured is an expenditure for shortcutting discussion on the merits: and, especially, on the merits of third-party platforms. The discussion is turned, instead, to contingencies: the fact of the existing voting system; the neck-and- neck state of the two major parties; the danger, imminent, that the other side Tory or Labour — will get in. This rein- forces loyalties in core-supporters and workers. It polarises. It shoulders aside debate but it does not answer debate. The effect is to supress potential support for third parties while the immediate and pressing battle is joined.

It is a battle which it suits both sides to sharpen by pointing up the alleged 'ex- tremism' of the opposing force. Mr Kin- nock is painted as a crypto-Marxist, Mrs Thatcher as a neo-Nazi. And, though each side presses the charge against the other and denies the charge against itself, the rhetoric of both leaks into the general atmosphere, until many voters believe both charge, and counter-charge. An im- pression grows of total war on all fronts between polar opposites, in which mod- erating doubts or sneaking regard for a third option are dangerous luxuries: dis- tractions from the elemental conflict, to be postponed while the conflict rages.

But what when it is over? As the smoke clears, two features emerge, both deeply worrisome for the old political warlord.

The loyalists among their troops remain loyal: permanently galvanised by conflict. But among the wider population a new type can be dimly perceived: a type which is not identified by the more brutal sort of pollster's questionnaire, for she or he is still (if asked) stoutly declaring an inten- tion of voting for one or other of the warlords. Only subtler questioning exposes her (or him). She is the voter who might vote for a third party if she thought it had a chance of winning. The Today newspaper discovered her recently. Weekend World is studying her closely.

A whimsy? Maybe. Intangible? Certain- ly. But dynamite, potentially. For the thought is that she is there, silently waiting: waiting for something to persuade her that, this time, they have a chance. And if she, and a few like her, are persuaded (by a concurrence of by-elections, perhaps, or one of those little ripples of revulsion against one or other warlord that happen in the best-regulated of parties) she will vote. And her vote will boost the showing of the outsider, adding to his credibility — and, In doing so, bringing over yet more cautious waverers, waiting or a clearer sign: who, in turn . . . and so on.

Call it (as Weekend World has) the `accelerator effect'; call it a bandwagon, call it a brushfire . . . but it is a phe- nomenon which will be increasingly discus- sed, hoped-for (by some), and feared (by others) in the period ahead of us. The atmosphere now prevailing, in which the major parties have assiduously built uP each others' images as 'extremists' is tinder to that fire. For years the Tories have described Labour in government as veiled or naked socialism.

Curiously, the closest Britain ever came to such a government was post-war — the period people seem to have chosen to christen as the golden age of moderation In the Labour Party. Recent experience of Labour in power has been more social- democrat than Marxist, but the Tories have effectively denied themselves those arguments from experience against social democracy. The world that has emerged from their analysis is a world in which the Labour Party are extreme socialists while social democracy has never been tried. Voters begin to believe it. And the world that has emerged from Labour's analysis will seem, to many, to feature Mrs Thatcher as the Wicked Witch of the South who has successfully termin- ated the mixed-economy and the welfare state. Many voters undoubtedly believe that too. It was a knock-down argument for voting Labour — when Labour was the only party promising to restore the consen- sual status-quo. Not every by-election picnic-stove starts an electoral brushfire. Not every brushfire that starts, takes hold and spreads. MY personal guess is that this is not quite it. The time has not come — not quite yet. But that, as the latest brushfire narrowly fails to take hold, Tory and Labour fire- fighters would be unwise to go back indoors. Out here in the electoral under- growth, it is still tinder-dry.

Matthew Parris is the presenter of LWT'S Weekend World.

Ferdinand Mount is on holiday.