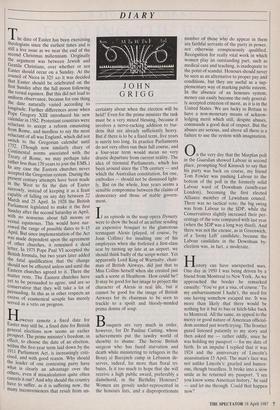 JOHN GRIGG The date of Easter has been exercising theologians since the earliest times and is still a live issue as we near the end of the second Christmas millennium. Originally the argument was between Jewish and Gentile Christians, over whether or not Easter should occur on a Sunday. At the council of Nicea in 325 AD it was decided that at Easter should be celebrated on the first Sunday after the full moon following the vernal equinox. But this did not lead to uniform observance, because for one thing the date naturally varied according to longitude. Further differences arose when Pope Gregory XIII introduced his new calendar in 1582. Protestant countries were reluctant to accept a reform emanating from Rome, and needless to say the most reluctant of all was England, which did not switch to the Gregorian calendar until 1752. (Though now similarly chary of Continental norms associated with the Treaty of Rome, we may perhaps take rather less than 170 years to join the EMS.) In any case the Eastern churches never accepted the Gregorian system. During the present century attempts have been made in the West to fix the date of Easter narrowly, instead of keeping it as a feast capable of falling on any day between 22 March and 25 April. In 1928 the British Parliament legislated to make it the first Sunday after the second Saturday in April, with no nonsense about full moons or vernal equinoxes. This would have nar- rowed the range of possible dates to 9-15 April. But since implementation of the Act was made dependent upon the agreement of other churches, it remained a dead letter. In 1975 Pope Paul VI accepted the British formula, but two years later added the fatal qualification that the change should not be effected unless and until the Eastern churches agreed to it. There the matter rests. The Eastern churches have yet to be persuaded to agree, and are so conservative that they will take a lot of persuading. In this as in other respects an excess of ecumenical scruple has merely served as a veto on progress.

However remote a fixed date for Easter may still be, a fixed date for British general elections now seems an earlier prospect. The prime minister's freedom, in effect, to choose the date of an election, within the five-year term laid down by the 1911 Parliament Act, is increasingly criti- cised, and with good reason. Why should the leader of one contesting party have what is clearly an advantage over the others, even if miscalculation quite often cancels it out? And why should the country have to suffer, as it is suffering now, the many inconveniences that result from un- certainty about when the election will be held? Even for the prime minister the task must be a very mixed blessing, because it involves a nerve-racking addition to bur- dens that are already sufficiently heavy. But if there is to be a fixed term, five years is surely too long. In practice Parliaments do not very often run their full course, and a four-year term would mean no very drastic departure from current reality. The idea of triennial Parliaments, which has been around since the 17th century — and which the Australian constitution, for one, embodies — should not be dismissed light- ly. But on the whole, four years seems a sensible compromise between the claims of democracy and those of stable govern- ment.

If an episode in the soap opera Dynasty were to show the head of an airline sending an expensive bouquet to the glamorous termagant Alexis (played, of course, by Joan Collins) for insulting one of his employees when she forfeited a first-class seat by turning up late at an airport, we should think badly of the script-writer. Yet apparently Lord King of Wartnaby, chair- man of British Airways, did just that to Miss Collins herself when she created just such a scene at Heathrow. How could he? It may be good for her image to project the character of Alexis in real life, but it cannot be good for the image of British Airways for its chairman to be seen to truckle to a spoilt and bloody-minded prima donna of soap.

Bouquets are very much in order, however, for Dr Pauline Cutting, whose achievements put the tawdry world of showbiz to shame. The heroic British surgeon who has faced starvation and death while ministering to refugees in the Bourj al Barajneh camp in Lebanon de- serves, indeed, far more than floral tri- butes. Is it too much to hope that she will receive a high public award, preferably a damehood, in the Birthday Honours? Women are grossly under-represented in the honours lists, and a disproportionate number of those who do appear in them are faithful servants of the party in power, not otherwise conspicuously qualified. Recognition for really vital work in which women play an outstanding part, such as medical care and teaching, is inadequate to the point of scandal. Honours should never be seen as an alternative to proper pay and conditions, but they are useful as a sup- plementary way of marking public esteem. In the absence of an honours system, money can easily become the only general- ly accepted criterion of merit, as it is in the United States. We are lucky in Britain to have a non-monetary means of acknow- ledging merit which still, despite abuses, commands a good deal of respect. But the abuses are serious, and above all there is a failure to use the system with imagination.

On the very day that the Marplan poll in the Guardian showed Labour in second place, prompting Neil Kinnock to say that his party was back on course, my friend Tom Fowler was pushing Labour to the bottom of the poll in the formerly solid Labour ward of Downham (south-east London), becoming the first elected Alliance member of Lewisham . council. There was no tactical vote; the big swing was from Labour to the SDP, while the Conservatives slightly increased their per- centage of the vote compared with last year (when the SDP was a long way third). And there was not the excuse, as in Greenwich, of a `loony Left' candidate, because the Labour candidate in the Downham by- election was, in fact, a moderate.

History can have unexpected uses. One day in 1950 I was being driven by a friend from Montreal to New York. As we approached the border he remarked casually: 'You've got a visa, of course.' To my embarrassment I hadn't, the need for one having somehow escaped me. It was more than likely that there would be nothing for it but to bus or hitch-hike back to Montreal. All the same, an appeal to the mercy or good nature of American official- dom seemed just worth trying. The frontier guard listened patiently to my story and then asked me — rather oddly, since he was holding my passport — for my date of birth. In an impulse I replied that it was 1924 and the anniversary of Lincoln's assassination 15 April. The man's face was not unlike Lincoln's: gnarled and humor- ous, though beardless. It broke into a slow smile as he returned my passport. `I see you know some American history,' he said — and let me through. Could that happen now?