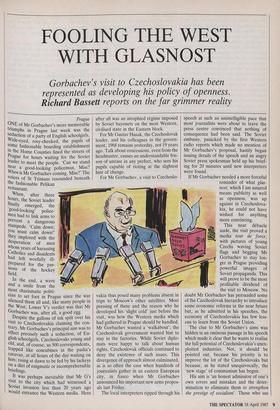 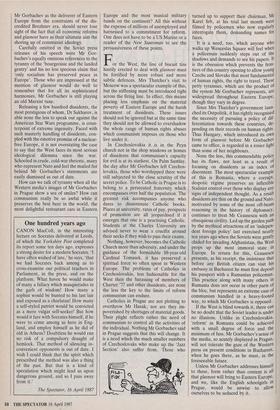 FOOLING THE WEST WITH GLASNOST

Gorbachev's visit to Czechoslovakia has been represented as developing his policy of openness.

Richard Bassett reports on the far grimmer reality Prague ONE of Mr Gorbachev's more memorable triumphs in Prague last week was the seduction of a party of English schoolgirls. Wide-eyed, rosy-cheeked, the pupils of some fashionable boarding establishment In the Home Counties lined the streets of Prague for hours waiting for the Soviet leader to meet the people. 'Can we stand near a good-looking policeman, Miss? When is Mr Gorbachev coming, Miss?' The voices of St Trinians resounded beneath the fashionable Pelikan restaurant.

When, after three hours, the Soviet leader finally emerged, the good-looking' police- men had to link arms to prevent a dangerous stampede. 'Calm down; you must calm down!' they implored with the desperation of men whom years of harassing Catholics and dissidents had left woefully ill- prepared for the pas- sions of the hockey field.

In the end, a wave and a smile from the most charismatic politi- cian to set foot in Prague since the war silenced them all and, like many people in the West, Lower V's verdict was that Mr Gorbachev was, after all, a good egg. Despite the gallons of ink spilt over his visit to Czechoslovakia claiming the con- trary, Mr Gorbachev's principal aim was to effect precisely such a seduction, of En- glish schoolgirls, Czechoslovaks young and old, and, of course, us 500 correspondents, trapped like concubines in the pasha's caravan, at all hours of the day waiting on him; rising at dawn to be fed by his lackeys on a diet of enigmatic or incomprehensible briefings. It was perhaps inevitable that Mr G's visit to the city which had witnessed a Soviet invasion less than 20 years ago would entrance the Western media. Here after all was an atrophied regime imposed by Soviet bayonets on the most Western, civilised state in the Eastern block.

For Mr Gustav Husak, the Czechoslovak leader, and his colleagues in the govern- ment, 1968 remains yesterday, not 19 years ago. Talk about concessions, even from the headmaster, causes an understandable fris- son of unease in any prefect, who sees his pupils capable of rioting at the slightest hint of change.

For Mr Gorbachev, a visit to Czechoslo- vakia thus posed many problems absent in trips to Moscow's other satellites. Most pressing of these and the reason why he developed his 'slight cold' just before the visit, was how the Western media which had gathered in Prague should be handled. Mr Gorbachev wanted a `walkabout'; the Czechoslovak government wanted him to stay in the factories. While Soviet diplo- mats were happy to talk about human rights, Czechoslovak officials continued to deny the existence of such issues. This divergence of approach almost culminated, as is so often the case when hundreds of journalists gather in an eastern European city, in fiasco when Mr Gorbachev announced his important new arms propos- als last Friday.

The local interpreters ripped through his speech at such an unintelligible pace that most journalists were about to leave the press centre convinced that nothing of consequence had been said. The Soviet embassy, panicked by the first Western radio reports which made no mention of Mr Gorbachev's proposal, hastily began issuing details of the speech and an angry Soviet press spokesman held up his brief- ing for 20 minutes until new interpreters were found.

If Mr Gorbachev needed a more forceful reminder of what glas- nost, which I am assured means publicity as well as openness, was up against in Czechoslova- kia, he could not have wished for anything more convincing.

The clue to Mr Gorbachev's aims was hidden in an ominous passage in his speech which made it clear that he wants to realise the full potential of Czechoslovakia's unex- ploited industries. Not, it should be pointed out, because his priority is to improve the lot of the Czechoslovaks but because, as he stated unequivocally, the `new stage' of communism has begun.

His aim is 'an honest admission of one's own errors and mistakes and the deter- mination to eliminate them to strengthen the prestige of socialism'. Those who see Mr Gorbachev as the deliverer of Eastern Europe from the constraints of the dis- credited Brezhnev era, should never lose sight of the fact that all economic reforms and glasnost have as their ultimate aim the shoring up of communist ideology.

Carefully omitted in the Soviet press releases of his speech were Mr Gor- bachev's equally ominous references to the tyranny of the 'bourgeoisie and the landed gentry' and his no less specious claim that `only socialism has preserved peace in Europe'. Those who are impressed at the mention of glasnost would do well to remember that for all its sophisticated harmonies, Mr Gorbachev is still playing an old Marxist tune.

Releasing a few hundred dissidents, the most prestigious of whom, Dr Sakharov, is able none the less to speak out against the American Star Wars programme, is coun- terpoint of extreme ingenuity. Faced with such masterly handling of dissidents, cou- pled with the emotive promise of a nuclear- free Europe, it is not overstating the case to say that the West faces its most serious ideological dilemma since the war. Schooled in crude, cold-war rhetoric, many who represent Nato and feel the mailed fist behind Mr Gorbachev's statements are easily dismissed as out of date.

How can we talk of tyranny when all the Western media's images of Mr Gorbachev in Prague show a sea of smiles? How can communism really be so awful while it preserves the best beer in the world, the most delightful restaurant cars in Eastern Europe and the most musical military bands on the continent? All this without the expense of millions of unemployed and harnessed to a commitment for reform. One does not have to be a US Marine or a reader of the New Statesman to see the persuasiveness of these points.

For the West, the line of biscuit tins hastily erected to deal with glasnost must be fortified by more robust and more subtle defences. Mrs Thatcher's visit to Moscow was a spectacular example of this, but the stiffening must be introduced right across the firing line. In effect, this means placing less emphasis on the material poverty of Eastern Europe and the harsh treatment of dissidents. These issues should not be ignored but at the same time they should not be allowed to overshadow the whole range of human rights abuses which communism imposes on those who live under it.

In Czechoslovakia it is in the Peyn church not in the shop windows or homes of dissidents that communism's capacity for evil is at its starkest. On Palm Sunday, the day after Mr Gorbachev left Czechos- lovakia, those who worshipped there were still subjected to the close scrutiny of the secret police. To be Catholic in Prague is to belong to a persecuted fraternity which encompasses over half the population. The greatest risk accompanies anyone who dares to disseminate Catholic books. Places at university, rates of pay, prospects of promotion are all jeopardised if it emerges that one is a practising Catholic. Students at the Charles University are advised never to wear a crucifix around their necks if they wish to pass their exams.

Nothing, however, becomes the Catholic Church more than adversity, and under the guidance of the formidable 88-year-old Cardinal Tomasek , it has preserved a spiritual force so often spent in Western Europe. The problems of Catholics in Czechoslovakia, less fashionable for the West then the harassing of members of Charter '77 and other dissidents, are none the less the key to the limits of reform communism can endure.

Catholics in Prague are not plotting to overthrow Mr Husak; nor are they im- poverished by shortages of material goods. Their plight reflects rather the need of communism to control all the activities of the individual. Nothing Mr Gorbachev said in Prague suggests that this will change. It is a need which the much smaller numbers of Czechoslovaks who make up the 'Jazz Section' also suffer from. Those who turned up to support their chairman, Mr Karel Srb, at his trial last month were filmed by policemen who now regularly interrogate them, demanding names for faces.

It is a need, too, which anyone who walks up Wenceslas Square will feel when a policeman suddenly steps out of the shadows and demands to see his papers. It is the obsession which prevents the fron- tiers of this country opening to allow young Czechs and Slovaks that most fundamental of human rights, the right to travel. These petty tyrannies, which are the product of the system Mr Gorbachev represents, are widespread throughout Eastern Europe, though they vary in degree.

Since Mrs Thatcher's government laun- ched its Ostpolitik, it has rightly recognised the necessity of pursuing a policy of dif- ferentiation towards these countries, de- pending on their records on human rights. Thus Hungary, which introduced its own form of glasnost before Mr Gorbachev came to office, is regarded in a rosier light than some of her neighbours.

None the less, this commendable policy has its flaws, not least as a result of focusing on dissidents as an index of discontent. The most spectacular example of this is Romania, where a corrupt, despotic regime preserves an inflexible Stalinist control over those who display any signs of independent thought. As a result dissidents are thin on the ground and Nato, motivated by some of the most off-beam reasoning in the history of diplomacy, continues to treat Mr Ceausescu with an obsequious civility. Led up the garden path by the mythical attractions of an 'indepen- dent foreign policy' last exercised nearly ten years ago when the Soviets were gently chided for invading Afghanistan, the West props up the most immoral state in Europe. In return for this, Ceausescu presents, as his receipt, the insistence that before any British citizen can visit his embassy in Bucharest he must first deposit his passport with a Rumanian policeman. This practice along with many others in Rumania does not occur in other parts of the bloc, but represents an extreme case of communism handled in a heavy-footed way, to which Mr Gorbachev is opposed. If the West is blind towards it, there can be no doubt that the Soviet leader is under no illusions. Unlike in Czechoslovakia, `reform' in Romania could be achieved with a small degree of force and the minimum of fuss. Mr Gorbachev's sense of the media, so acutely displayed in Prague, will not tolerate the gaze of the Western press on present conditions in Bucharest, when he goes there, as he must, in the foreseeable future.

Unless Mr Gorbachev addresses himself to these, form rather than content is all that glasnost will bring to Eastern Europe, and we, like the English schoolgirls In Prague, would be unwise to allow ourselves to be seduced by it.