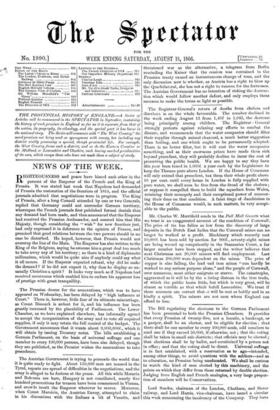 Page 1, 18 August 1866 — The Bill regulating the elections to the German Parliament has
Close

The Bill regulating the elections to the German Parliament has

been presented to both the Prussian Chambers. It provides that every Prussian of twenty-five, not a lunatic, a bankrupt, or a pauper, shall be an elector, and be eligible for election ; that there shall be one member to every 100,000 souls, odd numbers to send one if they exceed 50,000, if otherwise, not ; that the voting shall be taken in small sub-districts ; that officials may be elected ;- that elections shall be by ballot, and scrutinized by a person not in office ; and that the voting shall be direct. Universal suffrage is in fact established, with a reservation as to age—intended, among other things, to avoid questions with the soldiers—and as to education, no Prussian being uneducated. We shall be curious to watch the kind of men elected by this machinery, and the points on which they differ from those returned by double election. Judging from English and French analogies, a very large propor- tion of members will be Conservatives.