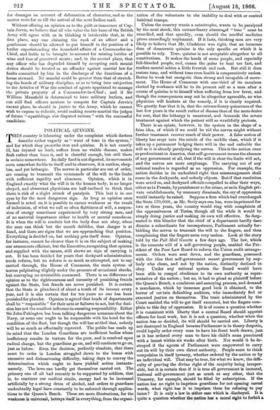 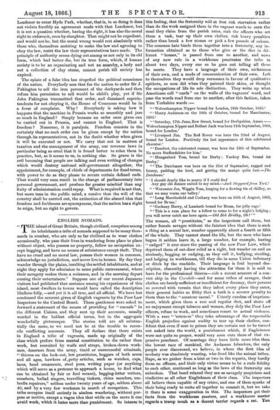 THIS country is labouring under the complaint which doctors describe rather vaguely as " want of tone in the system," and for which they prescribe iron and quinine. It is not exactly ill, has injured no limb, suffers from no visible disease, makes flesh rather than loses it, and is cheerful enough, but still there is malaise somewhere. Its daily food is not digested, its movements seem somewhat feeble to itself and to observers, it is restless, sleep- less, and yet lethargic. The nerves in particular are out of order, are ceasing to transmit the commands of the will to the limbs with sufficient rapidity and clearness. Opinion, which is in England exactly what the will is in the human body, is no longer obeyed, and observant physicians are hall-inclined to think that there is risk of a slight attack of paralysis. This last is in our eyes by far the most dangerous sign. As long as opinion once formed is acted on it is possible to excuse weakness as the result of indecision, of what we call so often flabbiness of will, a suspen- sion of energy sometimes experienced by very strong men, and of no material importance either to health or mental soundness. It is when the will is resolute but the body does not obey, when the man can think but the mouth dribbles, that danger is at hand, and there are signs that we are approaching that position. Everything is decided on, but nothing gets itself done. Opinion, for instance, cannot be clearer than it is on the subject of making our armaments efficient, but the Executive,recognizing that opinion and supplied with the means, still shows no sign of carrying it out. It has been decided for years that dockyard administration needs reform, but no reform is so much as attempted, not to say carried through, the House of Commons, the main system of nerves palpitating slightly under the pressure of occasional shocks, but conveying no irresistible command. There is no difference of opinion as to the righteousness and necessity of punishing frauds against the State, but frauds are never punished. It is certain that the State is plundered of about a tenth of its income every year, and it is also certain that for ten years no one has been punished for plunder. Opinion is agreed that heads of departments shall be " responsible " for their acts or failures to act, but the deci- sion has not the smallest influence in ensuring responsibility. Either Sir John Pakington has been talking dangerous nonsense about the Navy, or some one ought to be responsible with his head for the condition of the fleet, but though the will has settled that, nobody will be so much as effectually reproved. The public has made up its mind that the London Guardians are inefficient bodies whose inefficiency results in torture for the poor, and is resolved upon radical change, but the guardians go on, and will continue to go on, just as before. Even the decision, perfectly absolute, that there must be order in London struggled down to the bones with excessive and disheartening difficulty, taking days to convey the determination which ought to have yielded action instanta- neously. The laws can hardly get themselves carried out. The primary one of all had recently to be supported by soldiers, that is, to continue our medical simile, energy had to be increased artificially by a strong dram of alcohol, and orders to guardians undoubtedly legal have constantly to be enforced through applica- tions to the Queen's Bench. These are mere illustrations, for the weakness is universal, betrays itself in everything, from the organi-

zation of the volunteers to the inability to deal with or control habitual tramps.

Unless the country wants a catastrophe, wants to be paralyzed by the next shock, this extraordinary absencedof " tone " must be remedied, and that speedily, even should the needful medicine prove exceedingly unpleasant. If it lasts, thinking men are very likely to believe that Mr. Gladstone was right, that an immense dose of democratic quinine is the only specific on which it is possible to rely. True, quinine is not acceptable altogether to all constitutions. It makes the heads of some people, and especially full-blooded people, reel, causes the pulse to beat too fast, and renders mental action a little feverish and rash. But still it does restore tone, and without tone even health is comparatively useless.

Better be weak but energetic than strong and incapable of move- ment. The House of Commons with one-third of its members elected by workmen will be to its present self as a man after a

course of quinine is to himself when suffering from low fever, and

though the consequences may not be altogether agreeable, no wise physician will hesitate at the remedy, if it is clearly required- We greatly fear that it is, that the extraordinary quiescence of the last few years is the result rather of disease than of the mere desire for rest, that the lethargy is unnatural, and demands the severe treatment against which the patient still so wrathfully protests.

There is an opiate, however, in the system in the shape of a false idea, of which if we could be rid the nerves might without. further treatment recover much of their power. A false notion of liberty has crept into the minds of the middle class, which if it- takes up a permanent lodging there will in the end enfeeble the will as it is already paralyzing the nerves. This is the notion once so predominant in America, that self-government means the absence of any government at all, that if the will is clear the limbs will act, and the nerves are mere surplusage. The carrying out of any national resolve is regarded as an oppression. For example, the nation decides in its undoubted right that mismanagement shall cease in the dockyards, and nobody objects. But if that resolution. were acted on, and dockyard officials compelled to alter their ways, either as in Prnasia, by punishment as for crime, or as in English pri- vate establishments, by summary dismissals, the cry of oppression. would instantly be raised. Suppose a firm which had overcharged the State 170,0001., as Mr. Seely says one has, were imprisoned for two or three years, the country would ring with complaints of the oppressiveness of Tories, though all the while it would be simply doing justice and making its own will effective. So deep..- seated is this blunder that the chief of a department hardly dare- dismiss a subordinate for incompetence, Parliament actually for-

bidding the nerves to transmit the will to the fingers, and then complaining that the fingers seem very useless. Look at the story told by the Pall Mall Gazette a few days ago. The law, which is the concrete will of a self-governing people, enabled the Pre- sident of the Poor Law Board to reform the Union audit arrange-

ments. Orders were sent down, and the guardians, possessed with the idea that self-government meant government by any- body who chose, and not by the nation, distinctly declined to obey. Under any rational system the Board would have been able to compel obedience to its own authority as repre- sentative of the nation ; but no, it had to plead as plaintiff before.

the Queen's Bench, a cumbrous and annoying process, and demand a mandamus, which by immense good luck it obtained, to the horror of certain defaulting auditors, who immediately fled or executed justice on themselves. The tonic administered by the Court enabled the will to get itself executed, but the fingers com- plain to this day of oppression. It is of course a question whether it is consistent with liberty that a central Board should appoint officers for local work, but it is not a question, whether when the• nation has so decided, its will should be carried out. Liberty is not destroyed in England because Parliament is in theory despotic, could legally order every man to have his front teeth drawn, just.

as it has ordered every man to have his child's arms punctured. with a lancet within six weeks after birth. Nor would it be de- stroyed if the agents of Parliament were empowered to carry out its will by their own direct authority. People seem to think compulsion in itself tyranny, whether ordered by the nation or by an individual will. That may be true, fCr what we know, the diffi- culty of proving the divine right of the majority being insuper- able, but it is certain that if it is true all government is immoral, national self-government just as much as any other, that the Treasury, for example, should be filled by subscription. If the nation has no right to imprison guardians for not opening casual

wards, what right has it to imprison them for refusing to pay taxes ? It is only a law in either case which is disobeyed. It is quite a question whether the pad= has a moral right to forbid a

Londoner to enter Hyde Park, whether, that is, in so doing it does not violate forcibly an agreement made with that Londoner, but it is not a question whether, having the right, it has also the moral right to enforce it, even by slaughter. That might not be expedient, and would not be, but the moral wrong would rest absolutely with those who, themselves assisting to make the law and agreeing to obey the law, resist the law their representatives have made. The principle of authority seems dying out among us not only in its old form, which had better die, but its true form, which, if human society is to be an organizatin and not an anarchy, a body and not a collection of clay atoms, cannot perish till society has expired.

The opiate of a false idea has stupefied the political conscience of the nation. Everybody sees that for the nation to order Sir J. Pakington to sell the iron pavement of the dockyards and then refuse him permission to sell would be child's play, yet if Sir John Pakington transmitted that order, and dismissed superin- tendents for not obeying it, the House of Commons would be in a fever of complaint. Why? Everybody is asking how it happens that the machine in Prussia works so smoothly and jars so much in England? Simply because an order once given can be carried out in Prussia, and cannot in England. That is freedom? Nonsense, it is paralysis. Freedom consists in the certainty that no such order can be given except by the nation through its representatives, not in the doubt whether when given it will be executed or not. We carry that out in matters of taxation and the management of the army, our revenue laws in particular being so cruel that it is found better to relax them in practice, but, as it seems to us, in nothing else. So grave is the evil becoming that people are talking and even writing of changes which would destroy national self-government altogether, the appointment, for example, of chiefs of departments for fixed terms, with power to do as they please to secure certain defined ends. That would very soon result in the change of parliamentary into personal government, and produce far greater mischief than any fixity of administration could repay. What is required is not that, but more tone in the public mind, a resolve that the will of the country shall be carried out, the extinction of the absurd idea that freedom and feebleness are synonymous, that the nation has a right to reign, but no right to govern.