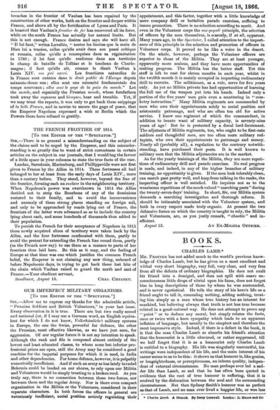 [To THE EDITOR OF THE " SPECTATOR."] SIR,—Allow me to express my thanks for the admirable article, " Prussian Soldiers and British Volunteers," in your last issue. Every observation in it is true. There are but two really sound and national (or, if I may use a German word, an English equiva- lent for which I do not know, Volksthitmliche) military systems in Europe, the one the Swiss, powerful for defence, the other the Prussian, most effective likewise, as we have just seen, for aggression. Of our regular forces it is not my intention to speak. Although the rank and file is composed almost entirely of the lowest and least educated classes, to whom none but inferior pro- fessional prizes are open, still the Army may be considered a good machine for the imperial purposes for which it is used, in India and other dependencies. For home defence, however, it is palpably numerically insufficient. And if such an army as has lately invaded Bohemia could be lauded on our shores, to rely upon our Militia and Volunteers would be simply trusting to a broken reed. As you truly say, there is no connection between these two forces, nor between them and the regular Army. Nor is there even compact organization in the Militia or the Volunteers, considered in their separate characters. In both forces the officers in general are watorieusly inefficient, social position entirely regulating their appointment, and this factor, together with a little knowledge of mere company drill or battalion parade exercises, sufficing to insure promotion. There is no selection according to merit. And even in the Volunteer corps the vox-populi principle, the selection of officers by the men themselves, is scarcely, if at all, apparent. Many years ago, in the Spectator, I called attention to the import- ance of this principle in the selection and promotion of officers in Volunteer corps. It proved to be like a voice in the desert. On the whole, however, perhaps the Volunteer officers are superior to those of the Militia. They are at least younger, apparently more zealous, and they have more opportunities of making progress. The Militia has the better staff. Yet this staff is left to rust for eleven months in each year, whilst in the twelfth month it is mainly occupied in imparting rudimentary drill to recruits. The militiamen, as a rule, serve for five years only. As yet no Militia private has had opportunities of learning the full use of the weapon put into his hands. Indeed only a portion of the five years' men gain even a smattering in " mus- ketry instruction." Many Militia regiments are commanded by men who owe their appointments solely to social position and aristocratic patronage, and who are often too old for active service. I know one regiment of which the commandant, in addition to innate want of military capacity, is seventy-nine years of age ! But he is protected by a ducal lord-lieutenant. The adjutants of Militia regiments, too, who ought to be first-rate soldiers and thoughtful men, are too often mere military red- tapists, who owe their appointments to patronage and money. Nearly all (probably all), a regulation to the contrary notwith- standing, have purchased their posts. It is well known to military men that the Militia adjutancies are in the market.

As for the yearly trainings of the Militia, they are mere repeti- tions of rudimentary drill and parade exercises. No real progress is made, and indeed, in any of the higher branches of military training, no opportunity is given. If the men look tolerably clean, can march past pretty well, and keep from talking in the ranks, the inspecting officer is well satisfied. He inquires not as to the wearisome repetitions of the much valued "marching pasts" during the twenty-seven days' training. In short, Sir, our Militia system demands a searching investigation and thorough reform. It should be intimately associated with the Volunteer system, and both in every respect made truly organic. At present the two defensive forces on which the country is taught to rely, the Militia and Volunteers, are, as you justly remark, " chaotic " and in- efficient.