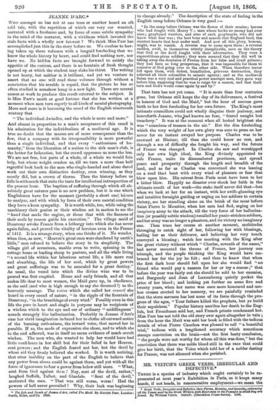 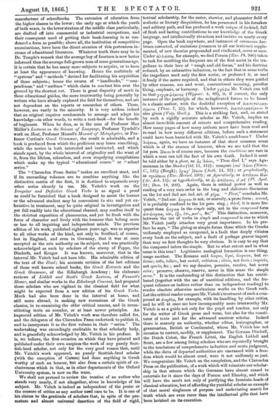 MR. VEITCH'S GREEK VERBS, IRREGULAR AND DEFECTIVE.* THERE is a

species of industry which ought certainly to be re- presented at next year's Exhibition in Paris, as it keeps many bands, if not heads, in remunerative employment—we mean the * Greek Verbs, Irregularand Defectice,their Forms, Meaning, and Quantity,embracing all the Tenses used by the Greek Writers, with References to the Passages in which they are found. By Williams Veitch. Oxford: (Clarendon Press Series). 1866.

manufacture of schoolbooks. The extension of education from the higher classes to the lower ; the early age at which the youth of both sexes, in the lower stratum of the middle class particularly, are drafted off into commercial or industrial occupations, and their consequent need of getting their book-learning in as con- densed a form as possible; above all, the institution of competitive examinations, have been the direct occasion of this portentous in- crease of educational literature. Whatever truth there may be in Dr. Temple's remark that the average boy of fourteen is now better informed than the average full-grown man of some generations ago, it is certain that he has many more subjects to acquire, or to have at least the appearance of knowing. Hence the multitude of "systems" and " methods " devised for facilitating his acquisition of those subjects ; hence the swarm of "handbooks," " com- pendiums," and " outlines " which claim to conduct him over the ground by the shortest cut. There is great disparity of merit in these educational guides, the more trustworthy being generally by writers who have already explored the field for themselves, and are not dependent on the reports or researches of others. These, however, are vastly in the minority. It is very seldom indeed that an original inquirer condescends to arrange and adapt his knowledge—in other words, to write a text-book—for the benefit of beginners. When he does, as in the case of Professor Max Miiller's Lectures on the Science of Language, Professor Tyndall's work on Heat, Professor Mansel's Manual of Metaphysics, or Pro- fessor Curtius's Greek Grammar, the result is admirable, and a book is produced from which the proficient may learn something, while the novice is both interested and instructed, and which stands apart, by the whole interval of originality and the want of it, from the lifeless, colourless, and even stupefying compilations which make up the typical " educational course " or " school series."

The " Clarendon Press Series" makes an excellent start, and if its succeeding volumes are to combine anything like the distinctive merits of the first, it is destined to supersede every other series already in use. Mr. Veitch's work on the Irregular and Defective Greek Verbs is as signal a proof as could be furnished that a book designed to assist the learner or the advanced student may be convenient in size and yet ex- haustive in treatment, may be quite original in investigation and yet fall readily into the educational channel, may confine itself to the strictest exposition of phenomena, and yet be fresh with the force of character and lively with the humour that belong more or less to all inquiring and independent minds. The previous edition of his work, published eighteen years ago, was so superior to all other works of the kind, not only in Scotland, of course, but in England, and even in Germany, that it was at once accepted as the sole authority on its subject, and was practically acknowledged as such by scholars of the stamp of Poppo, the Dindorfs, and Kruger. It was known, moreover, that in the interval Mr. Veitch had not been idle. His admirable edition of the text of the Iliad; his accurate revision of the last editions of those well known school books, the Greek Extracts and the Greek Grammar, of the Edinburgh Academy ; his elaborate reviews of Liddell and Scott's Greek Lexicon, of Faussett's Homer, and similar works in the Edinburgh Courant, had prepared those scholars who are _vigilant in the classical field for what might be expected from a new edition of his Greek Verbs. Much had also been done in the interval at home, and still more abroad, in making new recensions of the Greek classics, in re-examining the older critical canons, and in recon- stituting texts on sounder, or at least newer principles. An improved edition of Mr. Veitch's work was therefore called for, and the delegates of the Clarendon Press undertook to publish it, and to incorporate it as the first volume in their " series." The undertaking was exceedingly creditable to that scholarly body, and is gracefully acknowledged by Mr. Veitch in his preface. It is, we believe, the first occasion on which they have printed and published under their own auspices the work of any purely Scot- tish-bred scholar, not only for the very good reason that, until Mr. Veitch's work appeared, no purely Scottish-bred scholar (with the exception of Carson) had done anything in Greek worthy of such an honour, that also from a certain spirit of ex- clusiveness which in that, as in other departments of the Oxford University system, is now on the wane.

We shall not pretend to review the treatise of an author who stands very nearly, if not altogether, alone in knowledge of his subject. Mr. Veitch is indeed as independent of the praise or the censure of critics as any author need care to be. It is one of his claims to the gratitude of scholars that, in spite of the pre- mature and almost universal desertion of the field of rigid, textual scholarship, for the easier, showier, and pleasanter field of aesthetic or literary disquisition, he has persevered in his forsaken and solitary path, and has produced a work unique of its kind, full of fresh and lasting contributions to our knowledge of the Greek language, and intellectually vivacious and incisive on nearly every page. Open the book anywhere, and instances of erroneous doc- trines corrected, of omissions (common to all our lexicons) supple- mented, of new theories propounded and vindicated, occur at once. Under c'aahscrw, for example, we find Person (Ear. Ph. 986) taken to task for ascribing the frequent use of the first aorist in the tra- gedians to their love of "rough and old forms," and his doctrine reduced, by an exhaustive induction, to the fact that in some verbs the tragedians used only the first aorist, or preferred it, or used

it freely if the metre required, and that in others they were guided by other reasons, use and wont, conventional meaning, peculiar liking, emphasis, or harmony. Under ygapra Mr. Veitch can tell us that 79efer44Iousvo; (Hippocr. 4, 80), is, if correct, the only instance of the participle of the reduplicated future to be found in a classic author, with the doubtful exception of arccre cop,gyoy (Thuc. 7, 25), for which, however, brulrattcasouvan, is also given (Vulg. Goell.). This is a striking fact, and, as stated by such a rigidly accurate scholar as Mr. Veitch, implies an almost incredible amount of minute and comprehensive reading. How many pages of how many authors must have been read and re-read in how many different editions, before such a statement could have been hazarded with Mr. Veitch's confidence ? Under 5vicrsco, again, we have an instance of that 'sheer common sense which is of the essence of humour, when we are told that the 1st pers. loam, is of course rare, because the conditions are rare in which a man can tell the fact of his own death. Indeed it must be told either by a ghost, as 4; 90ivor, " Thus died I," says Aga- memnon in the Shades (Od. 11, 412) ; compare ilrus 5dvor (Simon. C., 125) (Bergk); 'ire/ 70avor (Anth. 14, 32) ; or prophetically, as Irgo6gavoy (Eur. Heracl. 590) ; or figuratively, as c'vrigavou tr3051, (Ar. Ach. 15); or hypothetically, as ay cirridavoy, El p,rj (Pl. Apol. 32 ; Dem. 18, 209). Again, there is critical power as well as reading of a very rare order in the long and elaborate discussion on the 1st and 2nd aor. ind. act. of Op,. " First," concludes Mr. Veitch, "2nd aor. iya-ixoy is not, or scarcely, a prose form ; second, it is probably confined to the 1st pers. sing. ; third, it is more fre- quent than i'vEysa in the simple only, not in the compound form

&a-iveyxa, thr-, tosr &c." This distinction, moreover, between the use of verbs in simple and compound is one to which Mr. Veitch justly attaches very great importance. In his pre- face he says, " The giving as simple forms those which the Greeks uniformly employed as compound, is a fault that deeply vitiates every book on the subject, and a fault of perhaps graver import than may on first thoughts be very obvious. It is easy to say that the compound infers the simple. But to what extent and in what sense is this true? Legitimate analogical formation is one thing, usage another. The Romans said linquo, liqui, linquere, but re- lictus; tollo, tollere, but sustuli, sublatum ; elicio, not lacio ; inspicio, not specio, &c. ; and we say deceive, perceive, receive, but never ceive ; preserve, observe, reserve, never in this sense the simple serve." It is the confounding of this distinction that has contri- buted (together with the use of uncritical editions, and the fre- quent reliance on indices rather than on independent reading) to render obsolete otherwise meritorious works on the Greek verb. Let the critical reader compare Mr. Veitch's treatment of such a com- pound as c'oogO6co, for example, with its handling by other critics, and he will at once see how incomparably more trustworthy Mr. Veitch is as a guide not only for the pupil and teacher, not only for the writer of Greek prose and verse, but also for the consti- tuter of texts and for the advanced amateur scholar. Indeed there is scarcely an authority, whether editor, lexicognapher, or grammarian, British or Continental, whom Mr. Veitch has not occasion to correct, modify, or supplement. The German Dindorf, the Dutch Cobet, the French Littre, the English Liddell and Scott, are a few among living scholars who are repeatedly brought to the touchstone of comprehensive induction and acute judgment, while the dicta of departed authorities are canvassed with a free- dom which would be almost cruel, were it not uniformly so just. We congratulate Mr. Veitch on the completion, and the Clarendon Press on the publication, of a work which will reinstate our scholar- ship in that esteem which the Germans have almost ceased to entertain for it since the days of Person and Elmsley, and which will have the merit not only of purifying the fountain-heads of classical education, but of affording the youthful scholar an example of that moral singleness of purpose and undeviating search for truth which are even rarer than the intellectual gifts that have been lavished on its execution.