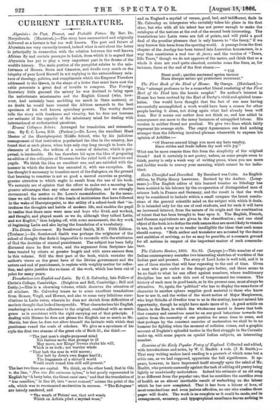 Rocks Classffred and Described. By Bernhard von Cotta. An English

edition, by Philip Henry Lawrence. Revised by the Author. (Long- mans.)--The English, editor of this learned treatise on lithology has been assisted in his labours by the co-operation of distinguished men of science both in France and Germany, and the result is that the work may be considered to include within a small compass the latest conclu- sions of the general scientific mind on the-subject with which it deals. It is intended only for the use of real students, and for such it will have an increased interest, from the nature of its origin and-the combination ,of talent that has been brought to bear upon it. The English, French, and German equivalents are given in the classification ; and one chief Object of the book is to define the rock names-that are mos t likely to remain in use, in such a-way as to render intelligible the ideas -that each name

convey. "Both author and translator are actuated by the desire and ambition of arriving, as far as may be possible,,at a oomnion ground for all nations in respect -of the :important matter of rock nomencla- !tare.