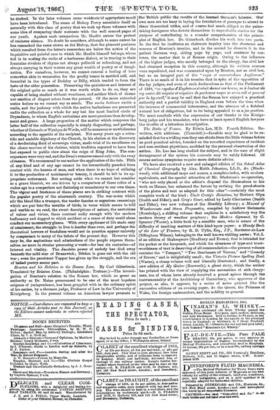 Bracton and his Relation to the Roman Law. By. Carl

Giiterbock. Translated..by Brinton: .Coxe. "(Philadelphia: Trubner.)—The investi- gation of Bracton'a:relation. to the Roman law, which .so great an authority as Dr. Maine pronounced to be -one of. the most hopeless enigmas of jurisprudence, .has been grappled with in the ordinary spirit of hismation, by &German judge, Professor of Law in the University of Konigsberg. In the present volume an American lawyer presents to "the 1BrItish goalie the results' of the learned fiermares labours. Our own men are too busy in laying the foundations of peerages. to attend to' these theoretical trifles, and of course feel much obliged to the pains- taking foreigners- who, devote themselves to unprofitable studies for the purpose of contributing to a sounder • comprehension of. the princi- ples of English law. Dr. Giiterbock divides his work into two parts. In the first he institutes an elaborate inqtriry into the -diameter and sources of Bracton's -treatise, and in the second ho dissects it in the. patient German way, sifting page by page, and sentence by sen- tence, the matter that is of Roman origin. Owing to the influence, of the higher judges, who mostly belonged to' the clergy, the-civil law had obtained reception in this country, although its written sources were repudiated, and was commented upon by Bnicton, not as civil law,, :but as an integral part of the " reges et consuetudines Anglicans-." There is so-much of it in his treatise that in spite of the 'opposition of the lay judgesand even of such declarations as that of the Parliament of 1388, "ce royalne d'Engleterron'estctit devant Tea /mires, ne d bentent els roy nostre dit seignior et seigniors du parlement unque ne serra rule et govern& par he ley civill," it may be said that the Roman law-enjoyed a practical authority and a partial' validity in England oven before the time when the increase of commercial 'intercourse, and "the 'absence "of -a finished natural law of obligations, led to its being appealed to as a.jus pentium. We' must conclude with 'the expression of our' thanks to the Konigs- berg judge and his translator, who have `at leastspared English lawyers. the trouble of a laborious investigation.