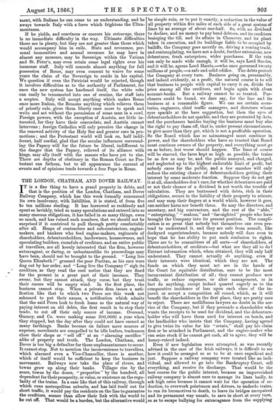 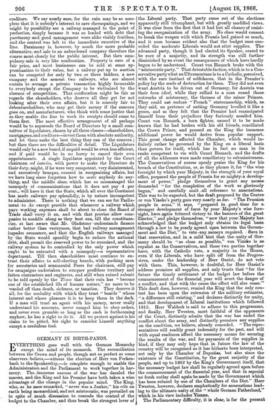 Even if new legislation were attempted, as was recently advised in the case of the Irish railways, it is difficult to see how it could be arranged so as to be at once expedient and just. Suppose a railway company were treated like an indi- vidual, and allowed to go into the Bankruptcy Court, sell everything, and receive its discharge. That would be the best course for the public interest, because an impoverished railway company is almost sure to manage its lines badly, to ask high rates because it cannot wait for the operation of re- duction, to overwork pointsmen and drivers, to underdo trains, to run its locomotives to death, to leave its bridges unrepaired and its permanent way unsafe, to save in short at every turn, so as to escape bullying for extravagance from the supplying

creditors. We say nearly sure, for the ruin may be so com- plete:that it is nobody's interest 'to save cheeseparings, and we might by possibility see a railway managed to the point of perfection, simply because it was so loaded with debt that parshnony, and good .management were alike visibly fruitless, and ,the control was left to the immediate executive of the line. Parsimony is, however, by much the more probable alternative; and sale to an unburdened company therefore the coursecniest clearly for the public interest, But then com- pulsory-sale •is -very like confiscation. Property is sure of a fair price, and most businesses • can be sold at some ap- proximation to their value, but a railwayput up to auction can be competed for only by two or three bidders, a new company and the 'nearest • two railways, who are almost certain to arrange a private transaction highly favourable to everybody except -the Company to be victimized by the absence .of competition. That confiscation might be fair as regards the- shareholders, who deserve all they get for not looking after their own affairs, but it is - scarcely fair to debentureholders, who may-get their money if the concern goes on, and manufacturers, who think with some justice that asAhey enable the line to work its receipts should come to them first. The most effective arrangement of all perhaps would be to supersede the Board of Directors by a small com- mittee of liquidators, chosen by all three classes—shareholders, mortgagees, and creditors—invest them with absolute authority, and let them make the best thing they can of the concern ; but then there are the difficulties of detail. The Liquidators would only be a new board, if unpaid would be even less efficient, and if paid would be in no hurry to cancel their own appointments. A single liquidator appointed by the Court chairman ad .interim, with power to make the Directors do their duty, might, if he were very competent, very disinterested, and excessively brusque, succeed in reorganizing affairs, but we'have,long since forgotten how to make anybody do any- thing, and the middle class, which has so mismanaged the monopoly of •comnaunications that it does not pay :4 ,per cent.,.will have it that the State, which all over the Continent has made railways pay splendidly, is by nature incompetent tondminister. There is nothing that we can see for 'Perna.- ment:to do except provide that •whenever a railway which pays .:working expenses shall be about to .close the Board of Trade shall 'tarry, it on, and with that proviso allow cora- ponies to muddle along as they best ean, till • the constittien- des„ at last,. aware that Mr. Gladstone :understands finance rather better .than vestrymen, that bad railway management impedes eommerce, and that. the English railways managed by the. State would speedily begin, to reduce the national debt, shall permit -the reserved power to •be exercised,, and the railway system to he .controlled by the only power which ought -to be entrusted with a monopoly—a •representative department. Till then shareholders must continue' to en- trust their affairs to self-electing boards, 'with pushing men for secretaries and ornamental Peers for chairmen, still pay for oanipaigns undertaken to conquer profitless territory and fatten contractors and engineers, and still when ruined submit to be told .openly by the Times that their ruin has " become one of the established -ills of human nature,", no more to be warded off than death, sickness, or taxation. They deserve it all, for the credulity with which they trust " boards " whose interest and whose pleasure it is to keep them in the dark. If a man will trust an agent with his money, never really understand his accounts, never compel him to obey orders, and never even grumble so long as the cash is forthcoming anyhow, he has a right to do it. All we protest_ against is his claim to be pitied, his right to consider himself anything except a credulous fool.