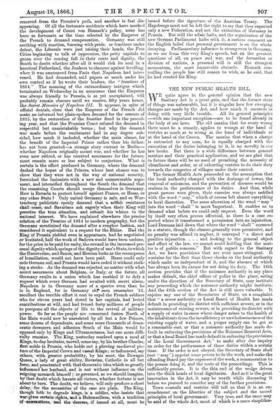 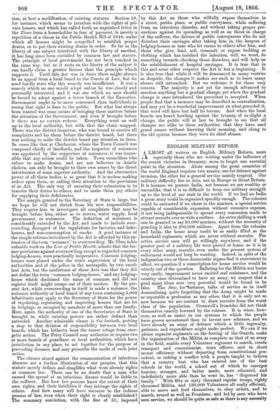 WE quite agree in the general opinion that the new Sanitary Act is a great gain, and that the former state of things was unbearable, but it is singular how few sweeping changes are made by the Act, and how much it succeeds in

doing with very little trouble. All its general principles —with one important exception—are to be found already in the body of our laws. The old maxim that for every wrong there must be a remedy, applies to wrongs at the hand of vestries as much as to wrong at the hand of individuals or at the hand of the Crown. The maxim that when a charge is entrusted to any man, he is equally charged with the execution of the duties belonging to it, is no novelty in our law books. But there is a wide difference between general maxims and their practical application, and we are glad that in future there will be no need of preaching the necessity of cleanliness and order, or of exhorting vestries to do their duty towards the congeries of villages under their control.

The former Health Acts proceeded on the assumption that the local authority charged with the drainage of towns, the removal of nuisances, and the prevention of diseases would be zealous in the performance of its duties. And thus, while great powers were given, their exercise was always saddled with the word " may," which of course left almost e'erything to local discretion. The mere alteration of the word "may into the word " shall " is most Important. It enables us to demand what before we could only request. Even the word by itself very often proves effectual, as there is a' case re- ported where it transformed a permission into an injunction. Lord Denman laid down that where the word "shall " occurred in a statute, though the clauses generally were permissive, and no penalty was affixed to neglect, it conveyed " a direct and positive injunction. . . . and looking to the general object and effect of the law, we cannot avoid holding that the mat- ter is of public concern." But with regard to the Sanitary Act, we have provisions that are even more stringent. It contains for the first time those checks on the local authority which make us independent of it, and the absence of which has always been its excuse for not doing its duty. The 16th section provides that if the nuisance authority in any place makes default, the chief officer of police in the place, acting under the direction of the Secretary of State, may institute any proceeding which the nuisance authority might institute. And the 49th section of the Act is still niore valuable. It enjoins any one of the Secretaries of State, on a complaint that " a sewer authority or Local Board of Health has made default in providing its district with sufficient sewers, or in the maintenance of existing sewers, or in providing its district with a supply of water in cases where danger arises to- the health of the inhabitants from the insufficiency or unwholesomeness of the existing supply of water, and a proper •supply can be got at a reasonable cost, or that a nuisance authority has made de- fault in enforcing the provisions of the Nuisance-Removal Acts, or that a local Board has made default in enforcing theprovisions of the Local Government Act," to make after due inquiry an order for the performance of those duties within a certain time. If the order is not obeyed, the Secretary of State shall (not "may") appoint some person to do the work, and make the offending Board pay the expenses of the work, a remuneration to the person doing it, and the costs of the proceedings. This is sufficiently precise. It is the thin end of the wedge driven into the thick heads of local dignitaries. And as it is the great innovation in the Act, it may be worth while discussing it before we proceed to consider any of the further provisions.

Town councils and vestries will tell us that it is an en- croachment on the liberties of the subject and the sacred principles of local government. Very true, and the same may be said of the Whole Act,-most of which is a,mere sbnplifiea-

tion, at best a modification, of existing statutes. Section 10, for instance, which seems to interfere with the rights of pri- vate houses, and which has called forth an anguished letter in the Times from a householder in fear of payment, is merely a repetition of a clause in the Public Health Bill of 1848, under which all houses might be compelled to establish proper drains, or to put their existing drains in order. So far as the liberty of one subject interfered with the liberty of another, it has long since been curtailed by common law and statute.

The principle of local government has not been touched in the same way, but as it rests on the liberty of the subject it can hardly claim a greater license than the principle which supports it. Until this Act was in force there might always be an appeal from a local board to the Courts of Law, but we need hardly state why this remedy was insufficient. It was a remedy which no one would adopt unless he was closely and personally interested, and it was one which no man should be forced to adopt against a lower branch of the Executive. Government ought to be more concerned than individuals in seeing that right is done to the public. But what has always been wanted was some means of bringing these matters before the attention of the Government, and even if brought before it there was no certain redress. Everything went on well up to the local authority, but with that the chain snapped. There was the district inspector, who was bound to receive all complaints and lay them before the district board, but there was nothing to make the district board pay attention to them. In cases like that at Chichester, where the Town Council was composed chiefly of landlords, and the inspector of nuisances was appointed by the supporters of nuisances, it was impos- sible that any action could be taken. Town councillors who refuse to make drains, and are not believers in Asiatic cholera, can only be brought to their own senses by the direct interference of some superior authority. And the obstructive power of all these bodies is so great that it is useless making orders upon them, or calling their attention to the provisions of an Act. The only way of ensuring their submission is to transfer their duties to others, and to make them pay others for supplying their deficiencies.

The margin granted to the Secretary of State is large, but we hope he will not shrink from his new responsibilities. They require him to investigate all complaints that may be brought before him, either as to sewers, water supply, local government, or nuisances. The definition of nuisances is considerably extended by the Act, and made to include over- crowding, disregard of the regulations for factories and bake- houses, and non-consumption of smoke. A good instance of the simple reforms introduced by the Act is afforded by this ex- tension of the term "nuisance" to overcrowding. Mr. Glen, inhis valuable work on the Law of Public Health, admits that the for- mer provisions against overcrowding, except as regarded common lodging-houses, were practically inoperative. Common lodging- houses were placed under the strict supervision of the local authorities and of the police in the metropolis, by two excel- lent Acts, but the misfortune of these Acts was that they did not define the term "common lodging-house," and any lodging- house which disdained the name of common and did not register itself might escape out of their meshes. By the pre- sent Act, while overcrowding in itself is made a nuisance, the nuisance authority or local board of any town containing 5,000 inhabitants may apply to the Secretary of State for the power of regulating, registering, and inspecting houses that are let in lodgings, or occupied by members of more than one family. Here, again, the authority of one of the Secretaries of State is brought in, while existing powers are rather defined than extended. Another admirable clause is the fortieth, putting a stop to that division of responsibility between two local boards, which has hitherto been the surest refuge from ener- getic action. The Privy Council may authorize or require two or more boards of guardians or local authorities, which have jurisdiction in any place, to act together for the purpose of preventing diseases, and may prescribe the mode of such joint action.

The clauses aimed against the communication of infectious diseases are a further illustration of our premiss, that this statute merely defines and simplifies what were already rights at common law. There can be no doubt that a man who caused the spread of an infectious disease would be liable to the sufferer. But how few persons know the extent of their own rights, and their liabilities if they infringe the rights of others. And how many will have recourse to the tedious process of law, even when their right is clearly established ? The summary conviction, with the fine of Si., imposed by this Act on those who wilfully expose themselves in a street, public place, or public conveyance, while suffering from an infectious disorder, and without taking proper pre- cautions against its spreading, as well as on those in charge of the sufferer, the drivers of public conveyances who do not disinfect their carriages after taking him in, the keepers of lodging-houses or inns who let rooms to others after him, and those who give, lend, sell, transmit, or expose bedding or clothing which has imbibed the infection, will, we trust, do something towards checking those disorders, and will help on the establishment of hospital carriages. It is true that in this and some other respects the Act is but a beginning. It is also true that while it will be denounced in many vestries as despotic, the changes it makes are such as to leave many abuses still untouched. But we welcome it for these very reasons. The majority is not yet far enough advanced to sanction anything but a gradual change, yet when the gradual change is once introduced the precedent is accepted. When people find that a measure may be described as centralization, and may yet be a wonderful improvement on what preceded it, that word will have lost half its terrors. And when the local boards are heard howling against the tyranny of so slight a change, the public will at last be brought to see that all changes are alike to these authorities, that they have used grand names without knowing their meaning, and clung to the old system because they were its chief abuses.