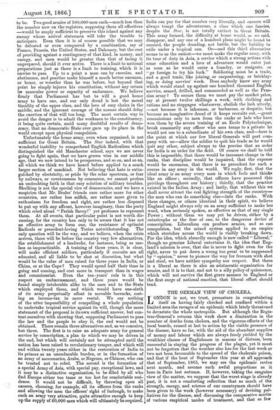 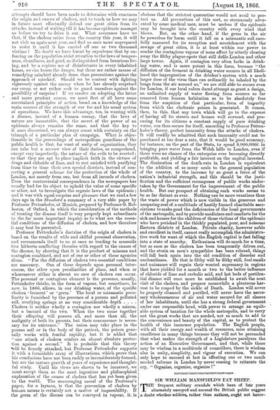 THE GERMAN VIEW OF CHOLERA.

LONDON is not, we trust, premature in congratulating itself on having fairly checked and confined within a limited area the ravages of an epidemic which lately threatened to devastate the whole metropolis. But although the Regis- trar-General's returns this week show a diminution in the number of deaths from cholera, and the vigorous efforts of the local boards, roused at last to action by the visible presence of the disease, have so far, with the aid of the abundant supplies of money and labour which are always freely yielded by the wealthier classes of Englishmen in seasons of distress, been successful in staying the progress of the plague, yet it must not be forgotten that the weather also has for the last week cr two not been favourable to the spread of the choleraic poison, and that if the heat of September this year at all approach that of September, 1865, we may see the epidemic revive next month, and assume such awful proportions as it bore in Paris last autumn. If, however, taking the sanguine view of the matter, we suppose that the worst stage is already past, it is not a comforting reflection that so much of the strength, energy, and science of our countrymen should have been given to the work (however necessary) of devising pal- liatives for the disease, and discussing the comparative merits of various empirical modes of treatment, and that so few

attempts should have been made to determine with exactness the origin and causes of cholera, and to teach us how we may in future most effectually defend our great cities from its attacks, instead of waiting till it has become epidemic amongst us before we try to drive it out. What assurance have we that, if the cholera retire from the country this year, it will not visit us again next year, and find us once more unprepared to resist it until it has carried off one or two thousand victims ? No doubt we have learnt by experience that by en- forcing on the population strict attention to the laws of temper- ance, cleanliness, and good, as distinguished from luxurious liv- ing, and by a copious use of disinfectants in every inhabited house, we can lessen the danger, but these are rather means of remedying mischief already done, than precautions, against the approach of mischief. Should we be content with fighting vigorously against the enemy when he has already surprised our camp, or not rather seek to guard ourselves ,against the possibility of surprise ? If we resolve on adopting the latter and more prudent course, we must first of all have some ascertained principles of action, based on a knowledge of the main sources of the strength of our foe and his usual system of operations. We have this advantage, too, in warring with a disease, instead of a human enemy, that the laws of nature are immutable, that the secret of the power of an epidemic always remains the same, and that the key to it once discovered, we can always count with certainty on the triumph of a particular plan of campaign, What is objec- tionable in the proceedings of metropolitan guardians of the public health is that, for want of unity of organization, they can take but a narrow view of their duties, or comprehend, except very imperfectly, the nature of the evils to be averted ; so that they are apt to place implicit faith in the virtues of drugs and chloride of lime, and to rest satisfied with purifying from time to time their own special districts, instead of con- certing a general scheme for the protection of the whole of London, not merely from one, but from all inroads of cholera, Even the controversial correspondence in the newspapers has usually had for its object to uphold the value of some specific or other, not to investigate the organic laws of the epidemic ; and it was with equal surprise and pleasure that we read a few days ago in the Standard a summary of a very able paper by Professor Pettenkofer, of Munich, prepared by Professor G. Rol+ leston, of Oxford, in which the consideration of the methods of treating the disease itself is very properly kept subordinate to the far more important inquiry as to what are the essen- tial conditions of the diffusion of cholera, and how. therefore it may best be prevented.

Professor Pettenkofer's doctrine of the origin of cholera is based on the results.of wide and skilful personal observation, and recommends itself to us at once as tending. to reconcile two hitherto conflicting theories with regard to the causes of the disease, by showing that it is the product of miasma and contagion combined, and not of one or other of these agencies alone. "For the diffusion of cholera two essential conditions are necessary. One of these depends upon personal inter- course, the other upon peculiarities of place, and when. or wheresoever either is absent no case of cholera can occur. The personal or contagious element is the presence, usually, Pettenkofer thinks, in the form of vapour, but sometimes, he now, in 1866, allows, in our drinking water, of the specific cholera `ferment' or 'germ.' The local or miasmatic pecu- liarity is furnished by the presence of a porous and polluted soil, overlying-springs at no very considerable depth . . . . Cholera is neither wholly a contagion nor wholly a miasm, but a bastard of the two. When the two come together their offspring will possess all, and more than all, the malignity of both its parents, but their concurrence is neces- sary for its existence." The union may take place in the porous soil or in the body of the patient, the poison gene- rally works with fearful rapidity, but it is added that " one attack of cholera confers an almost absolute protec- tion against a second," It is probable that this theory will be fiercely attacked, but Professor Pettenkofer supports it with a. formidable array of illustrations, which prove -that his conclusions have not been rashly or inconsiderately formed, but are the mature growth of years of experience and thought- ful study. Until his views- are shown to be incorrect, we must accept them as the most ingenious and philosophical explanation of the causes of cholera that has yet been given to the world, The encouraging moral of the Professor's paper, fora layman, is that the prevention of cholera by human.means is certainly- not a matter of impossibility. If the germ of the disease can be conveyed in vapour, it, is obvious that the strictest quarantine would not avail to pro- tect us. All precautions of this sort, so strenuously advo- cated by some medical men, must be useless if the epidemic may be brougit into the country with every wind that blows. But, on the other hand, if the germ in, the air be powerless for harm until it fall on a miasmatic, soil ,care- fully manured for its reception and nourishment with the sewage of great cities, it is at least within our power to render the contagious vapour of none effect by utterly clearing away the filthy plague-spots that still defile London and other large towns. Again, if contagion very often lurks in drink- ing water, and is more potent in this form, because "the diffusion of the ferment in drinking water secures in all likeli- hood.the impregnation of the drinker's system with a much larger dose of the virus than can ordinarily be inhaled by the lungs, from the air around. us," we are still able-to secure even for London, if our local rulers dared attempt so great ,a design, an unlimited supply of water flowing from sourees so far removed from human habitation as to be absolutely- free from the suspicion of that particular. form of impurity from which the choleraic poison is. generated. It comes, then, to this, that any town which will go to the ,expense of having all its streets. and houses well sewere.d, and pro- curing for its citizens a constant supply of pure drinking water, can thus secure for itself, according to Professor Petten- kofer's theory, perfect immunity from the attacks- of cholera. It will readily, be admitted that such immunity could not be purchased at too dear a rate, that it would, be.good economy, for instance, on the part of the State, to spend 8,000,0001. in bringing pure water from the Welsh hills to London, even if there were no chance of the enterprise ever. becoming directly profitable, and yielding a fair interest on the. capital; invested.

The diminution of the- i

death.rate in. London s- equivalent to the addition of, so many souls to the general population of the country, to the increase by so- great a forcer-of -the nation's industrial strength, and this should- be the justi- fication and the sufficient recompense of public works-under- taken by the Government for the improvement , of the public health. But our:prospect of obtaining such works seems to be as far distant as ever. Nothing can be more vexatious than the waste of ,power which is now visible in the. generous and unsparing zeal of, a multitude of hastily formed charitable asso- ciations to make goad the, deficiencies. of the local governments of the metropolis, and-to providnmedicines and comforts for the sick andlemes for. the children of those victims of the epidemic who have,-perished in the thickly populated, poor, and noisome Eastern districts of London. Private charity, however noble and excellent in itself, cannot really accomplish the administra- tive work for want, of which the English capital is fast falling into a state of anarchy. Enthusiasm will do much for a time, but as soon as the cholera has been temporarily driven:out, and the strain on men's sympathies has been relaxed,, things will fall back again into the old condition of disorder and uncleanliness. He that .is filthy will be filthy still, foul smells and nuisances will regain their wonted supremacyrin regions that have yielded for a month or two to the better influence of chloride of lime and carbolic acid, and hot beds of pestilen- tial disease will once more be established to await the next visit of the cholera, and prepare meanwhile a plenteous har- vest to be reaped by the sickle of Death, London will,never be properly cleansed and purified, will never have the neces- sary. wholesomeness of air and water secured for all classes of her inhabitants, until she has a strong lederalgovernment under one responsible head, with power to arrange an equit- able system of taxation for the whole metropolis, and to carry out the great works that are -needed, not so much, to add to the convenience and beauty of the capital, as to protect the health of this immense population. The English people, with all their energy, and wealth of resources, miss attaining excellence in many things because -they will not be ,persuaded. that what, makes the strength of a Legislature paralyzes the action of an Executive Government, and that, while there may be wisdom in a multitude of councillors, there is wisdom also in unity„ simplicity, and vigour of execution. We can only hope to succeed at last in effecting one or two much needed reforms in London by never ceasing to reiterate the cry, "Organize, organize, organize 1"