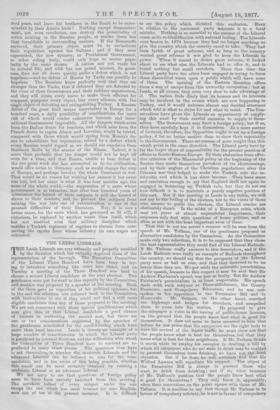 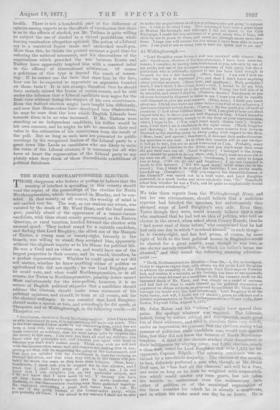 HE Leeds Liberals are very naturally and properly troubled JL by the disunion which has virtually deprived them of the representation of the borough. The Executive Committee of the Liberal Three Hundred have been busy in try- ing to introduce something like order into chaos, and on Tuesday a meeting of the Three Hundred was held to ohoose a second Liberal candidate at the next election. Two gentlemen were put forward in this capacity by the Committee, and another was proposed by a speaker at the meeting. Each of the three gave an exposition of his political opinions, but in the end the selection was referred back to the Committee, with instructions to see if they could not find ,a still more eligible candidate than any. of those proposed to the meeting. We are not concerned with those special qualifications which may give this or that Liberal candidate a good chance of success in contesting the second seat, but there are one or two considerations suggested by the speeches of the gentlemen nominated for the candidateship which have more than local interest. Leeds is merely an example of a large number of constituencies in which the Liberal party is ,paralysed by internal divisions, and the difficulties with which the Committee of Three Hundred have to contend are re- produced in many other places. The questions they have to ask themselves, is whether the moderate Liberals and the advanced Liberals can be induced to vote for the same candidate, and in the event of this being possible, whether this result can be most certainly obtained by running a moderate Liberal or an advanced Liberal.

We are sorry to see that questions of foreign policy seem to have been entirely banished from this meeting. The speakers talked of every subject under the sun except the one which has most interest for nine English- men out of ten at the present moment. It is difficult

to see the policy which dictated this exclusion. Even in relation to the narrowest party intermits it is a fatal mistake. Nothing is so essential to the success of the Liberal cause as its re-identification with national feeling. The Liberals were beaten in 1874 because they had no longer anything to give the country which the country eared to take. They had been lavish of great reforms, and so long as the country wanted great reforms it was glad to keep the Liberals in power. When it ceased to desire great reforms, it looked about to see what else the Liberals had to offer it, and it found nothing but small crotchets, Since that time the Liberal party have too often been engaged in trying to force these discredited wares upon a public which will have none of them. The uprising of the Eastern Question offers them a way of escape from this unworthy occupation ; but at Leeds, at all events, they seem very slow to take advantage of it. The nation feels dimly that its honour and its interests may be involved in the events which are now happening in Turkey, and it would welcome almost any decided utterance which told it what to strive for and what to resist. The Con- servatives have given the Liberals an opportunity of supply- ing this want by their careful omission to supply it them- selves. The Government may have a foreign policy, but if so, they have carefully kept it to themselves. As a mere matter of business, therefore, the Opposition ought to set up a foreign policy, if for no better motive than to show their superiority to the Government. There are reasons of more weight than this which point in the same direction. The Liberal party have by far the larger share of responsibility for the present position of affairs in South-Eastern Europe. By their abstention from effec- tive criticism of the Ministerial policy at the beginning of the Session they made themselves partakers of its shortcomings, and by their neglect of the Christian populations after the Crimean war they helped to make the Turkish rule the in- tolerable evil which it has since become. They have sense and resolution enough to say that England shall not again be engaged in bolstering up Turkish rule, but they do not see how difficult it is to maintain a purely negative position of this sort. Yet if the meeting at Leeds is any index, we will not say to the'feeling of the electors, but to the views of those who assume to guide the electors, the Liberal oracles are obstinately dumb. In the midst of a European crisis, which may yet prove of almost unparalleled importance, their responses only deal with questions of home polities, and as often as not with the least important even of these. That this is not too severe a censure will be seen from the speech of Mr. Tatham, one of the gentlemen proposed as alternative candidates by the Committee. As the Committee made only two selections, it is to be supposed that they chose the best representative they could find of the Liberal Radicals. If Mr. Tatham really answers to this description, and if the Leeds Radicals were really an example of Radicals throughout the country, we should say that the prospects of the Liberal party were as bad as ever, and that they deserved to be no better than they are. We put aside the miserable parochialism of his speech, because in this respect it may be said that Sir Andrew Fairbairn's speech was just as faulty. But Sir Andrew Fairbairn's parochialism is at least respectable. His speech dealt with such subjects as Disestablishment, the County Franchise, and Compulsory Education, and he was out- spoken in his opposition to the Permissive Bill and to

Home-rule. Mr. Tatham, on the other hand, searched the highways and hedges for crotchets, and compelled

them to coins into his oration. He proposed. to give the ratepayer a voice in the issuing of public-house licences, on the ground that the people know best what is good for themselves. It does not seem to have occurred to him that before he can prove that the ratepayers are the right body to have the control of the liquor traffic he must show not that the people know what is best' for themselves, but that they know what is best for their neighbours. If Mr. Tatham thinks it worth while to employ his energies in drafting a bill by which all ratepayers who do not want to drink may be enabled to prevent themselves from drinking, we have not the least objection. But if he does, he will certainly find that Sir Wilfred Lawson will repudiate his support. The object of the Permissive Bill is always to prevent those who want to drink from drinking ; and if so, what becomes of Mr. Tathain's position that the people know best what is good for themselves V They only know it, apparently, when their convictions on the point square with those of Mr. Tatham. It is needless to say that though Mr. Tatham is in favour orcompulsory sobriety, he is not in favour of compulsory health. There is not a hundredth part of the difference of opinion among experts as to the effects of vaccination that there is as to the effects of alcohol, yet Mr. Tatham is quite willing to subject the use of alcohol to a virtual prohibition, while leaving vaccination altogether optional. His notion of a Liberal cry is a restricted liquor trade and unchecked small-pox. More than this, he thinks the present moment a good time for reducing the national armament, and his observations of the negotiations which preceded the war between Russia and Turkey have apparently inspired him with a renewed belief in the efficacy of international arbitration. Of course a politician of this type is beyond the reach of reason- ing. If he cannot see the facts that stare him in the face, how can be be expected to appreciate an argument founded on those facts It is not strange, therefore, that he should have entirely missed the lesson of recent events, and be still under the delusion that a Liberal candidate may argue for the Irish vote without losing the support of his own countrymen. Even the Salford election might have taught him differently, and now that Home-rulers have developed into Obstructives, he may be sure that the love which English Liberals bear towards them is in no wise increased. If Mr. Tatham were standing as an independent candidate, his follies would be his own concern, and he might be left to ascertain their real value in the estimation of his countrymen from the result of the poll. But so long as such men are presented to public meetings by the recognised leaders of the Liberal party in a great town like Leeds as candidates who are likely to unite the votes of the Liberal electors, it is necessary for all who have at heart the regeneration of the Liberal party to say plainly what they think of these discreditable exhibitions of political flatulence.