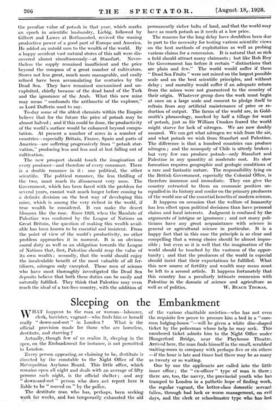 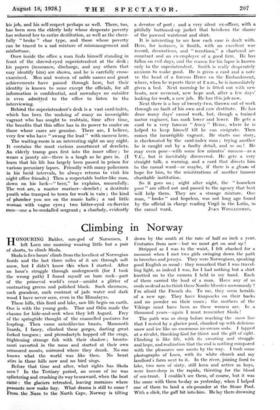 Sleeping on the Embankment

WHAT happens to the man or woman,--labourer, clerk, barrister, vagrant—who finds him or herself really " down-and-out " in London ? What is the official provision made for those who are homeless, destitute, and starving?

Actually, though few of us realize it, sleeping in the open, on the Embankment for instance, is not permitted in London.

Every person appearing, or claiming to be,, destitute is directed by the constable to the Night Office of the Metropolitan Asylums Board. .This little office, which remains open all night and deals with an average of fifty persons each night, is the official shelter ; and any " down-and-out " person who .does., not report here is liable to be "moved on "by the police. .

The destitute man who has, perhaps, been. seeking work for weeks, and has teinporarily exhausted the aid of the various charitable societies—who has not even the requisite few pence to procure him a bed in a "com- mon lodging-house "—will be given a white disc-shaped ticket by the policeman whose help he may seek. This numbered ticket admits him to the Night Office under Hungerford Bridge, near the Playhouse Theatre. Arrived here, the man finds himself in the small, scrubbed waiting-room in company with perhaps five or six others —if the hour is late and times bad there may be as many as twenty or so waiting.

One by one the applicants are called into the little inner office ; the " ex-officer " type of man is there ; there are, too, the navvy, the provincial youth who has tramped to London in a pathetic hope of finding work, the regular vagrant, the better-class domestic servant fallen, through bad luck or worse management, on evil days, and the clerk or schoolmaster type who has'lost his job, and his self-respect perhaps as well. There, too, has been seen the elderly lady whose desperate poverty has reduced her to entire destitution, as well as the cheer- fully " broke " char type, and those whose poverty can be traced to a sad mixture of mismanagement and misfortune.

Once inside the office a man finds himself standing in front of the shrewd-eyed superintendent at the desk ; his papers (insurance, discharge, and any others that may identify him) are shown, and he is carefully cross- examined. Men and women of noble names and great achievements have passed through here, but their identity is known to none except the officials, for all information is confidential, and nowadays no outsider is even admitted to the office to listen to the interviewing.

Behind the superintendent's desk is a vast card-index, which has been the -undoing of many an incorrigible vagrant who has sought to reobtain, time after time, the benefits that this office has in its power to confer on those whose cases are genuine. There are, I believe, very few who have "swung the lead" with success here.

The waiting-room is an interesting sight on any night. It contains the most curious assortment of derelicts, An elderly tramp goes first into the inner office ; he wears a' jaunty air—there is a laugh as he goes in. (I learn that his life has largely been passed in prison for various pecuniary lapses. Friendly with many policemen in his lucid intervals, he always returns to visit his night office friends.) Then a respectable butler-like man, down on his luck—" beer," he explains, mournfully. The rest are, a master mariner—derelict ; a destitute youth who tramped to town for work in vain ; the kind of plumber you see on the music halls ; a sad little woman ' with vague 'eyes; two bitter-eyed ex-Service men--one a be-medalled sergeant ; a charlady, evidently a devotee of port ; and a very silent ex-officer, with a pitifully buttoned-up jacket that betokens the shame of the pawned waistcoat and shirt.

It is interesting to see how each case is dealt with. Here, for instance, is Smith, with an excellent . war record, decorations, and "mentions," a eharterea ac- countant and an ex-employee of a good firm. He has fallen on evil days, and the reason for his lapse is known only to the superintendent. Smith is really desperately anxious to make good. He is given a card and a note to the bead of a famous Home on the Embankment, where, when he reports there at 2 a.m., he is immediate1Y given a bed. Next morning he is fitted out with new boots, new overcoat, new hope and, after a few days' looking for work, a new job. He has this job now.

Next there is a boy of twenty-two, thrown out of work through no fault of his own and now destitute. He has done many days' casual work, but though a trained motor engineer, has sunk lower and lower. He gets a card to a very famous "Army " Hew, where he is helped to keep himself till he can emigrate. Then comes the incorrigible vagrant. He starts one story, is checkmated by the card-index man; trying another he is caught out by a faulty detail, and so on ! He may even pose—with some few minutes' success--as a V.C., but is inevitably discovered. He gets a very straight talk, a warning, and a card that 'directs him to the casual ward—or maybe, if there is a gleam of hope for him, to the ministrations of another famous charitable institution.

So it goes on ; night after night, the " homeless poor " are sifted out and passed to the agency that best will help them. They are a strange raiZture. One man, " broke " and hopeless, was not long ago found by the official in charge reading. Virgil in the Latin, in