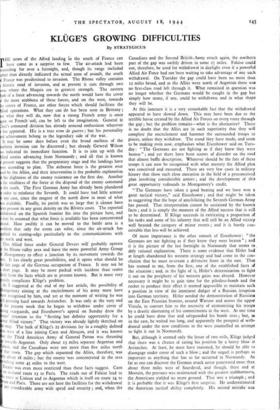 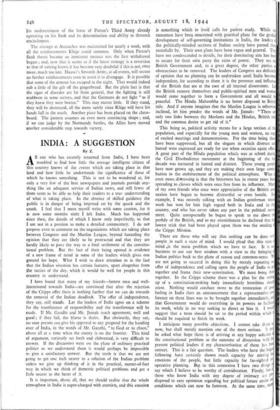 • By STRATEGICUS HE news of the Allied landing in the south of France can have come as a surprise to few. The air-attack had been roceeding for over a fortnight, and, though its range included ther than directly indicated the actual zone of assault, the south France was predestined to invasion. The Rhone valley contains historic road of invasion, and at present it cuts through two

eas where the Maquis are in greatest strength. The eastern ank of a force advancing towards the north would have the cover the most. stubborn of these forces, and on the west, towards e centre of France, are other forces which should facilitate the 'lied operations. What they can do has been seen in Brittany ;

ut what they will do, now that a strong French army is .once am on French' soil, can be left to the imagination. General le lerc's armoured division has already aroused enthusiasm wherever has appeared. His is a true nom de guerre ; but his personality d achievement belong to the legendary side of the war.

It may be some days before even the broad outlines of the uthern invasion can be discerned ; but already General Wilson s indicated its immediate function. It is to join up with the Hied armies advancing from Normandy ; and all that is known present suggests that the preparatory stage and the landings have e according to plan. The airborne force is the greatest ever sed by the Allies, and their intervention is the probable explanation the slightness of the enemy resistance on the first day. Another the smallness of the force at the disposal of the enemy command the south. The First German Army has already been plundered order to reinforce the Seventh. It could have had little armour any case, since the magnet of the north drew in most of what as available. Finally, its parish was so large that it cannot have n present in any great density.on the Riviera coast. The reported ithdrawal on the Spanish frontier fits into the picture here, and may be assumed that what force is available has been concentrated land. How swiftly it can be moved to the battle area is a oblem that only the event can solve, since the air-attack has plied its cutting-edge particularly to the communications with e north and west.

This Allied force under General Devers will probably operate the Rhone valley area and leave the more powerful Army Group Montgomery to effect a junction by its movement towards the St. It has clearly great possibilities, and it opens what should be e last page of the German occupation of France. It may not be short page. It may be more packed with incident than seems • ely from the facts which are at present known. But it must very avely complicate Kliige's problem.

As I suggested at the end of my last article, the possibility of ontgomery aiming at the encirclement of his army must have en recognised by him, and yet at the moment of writing he was II pressing hard towards Avranches. It was only at the very end the present week that he began to withdraw under cover of ong rearguards, and Eisenhower's appeal on Sunday drew the

ps' attention to the " fleeting but definite opportunity for a ajor Allied victory." That victory was already lightly sketched on map. The bulk of Kluge's 22 divisions lay in a roughly defined a west of a line joining Caen and Alencon, and it was known t the Third American Army of General Patton was thrusting towards Argentan. Only about 13 miles separate Argentan and laise, and the Canadians were not more than five miles north that town. The gap which separated the Allies, therefore, was ly about x8 miles ; but the enemy was concentrated in the area tching some 45 miles to the west.

Escape was even More restricted than these facts suggest. Caen on national route 13 to Paris. The roads out of Falaise lead to s route at Lisieux and to Argentan which is itself on route 24 to eus and Paris. There are not here the facilities for the withdrawal any considerable army with speed and security ; and, when the Canadians and the Second British.Auny struck again, the northern part of the gap was swiftly driven in some 2! miles. Falaise could not, therefore, be used for withdrawal in daylight even if a powerful Allied Air Force had not been waiting to take advantage of any such withdrawal. On Tuesday the gap could have been no more than 52 miles broad, and as the Allies were north of Argentan there was no first-class road left through it. What remained in question was no longer whether the Germans would be caught in the gap but simply how many, if any, could be withdrawn and in what shape they will be.

At this juncture it is a very remarkable fact that the withdrawal appeared to have slowed down. This may have been due to the terrible havoc created by the Allied Air Forces on every route through the gap ; but the problem remains—what is the alternative? There is no doubt that the Allies are in such superiority that they will complete the encirclement and hammer the surrounded troops to

pieces, unless they withdraw. The stand they have made, and seem to be making even now, emphasises what Eisenhower said on Tues-

day " The Germans are not fighting as if they knew they were beaten " ; and yet there have been scenes of disorder on the road that almost baffle description. Whatever should be the fate of these troops it can now be recognised with what mastery the Allied plan was conceived and executed. There are very few cases in military history that show such close execution in the field of a preconceived plan involving considerable armies ; and the development of this great opportunity redounds to Montgomery's credit.

" The Germans have taken a good beating and we have won a great tactical victory," said Eisenhower ; and that might be taken as suggesting that the hope of annihilating the Seventh German Army has passed. That interpretation cannot be sustained by the known facts ; and it is simply the measure of the Allied success that is still to be determined. If Kluge succeeds in extricating a proportion of his tanks and some of his infantry that will still be an Allied victory well beyond the category of minor events ; and it is barely con- ceivable that less will be achieved.

Of more importance is the other remark of Eisenhower : " the Germans are not fighting as if they knew they were beaten " ; and it is the picture of the last fortnight in Normandy that seems to defy rational explanation. There is some evidence that Hider had at length abandoned his western strategy and had come to the con- clusion that he must re-create a defensive front in the east. That has seemed to me, from the first, one of the established facts of the situation ; and, in the light of it, Hitler's determination to fight it out on the periphery of his western gains was absurd. However necessary it might be to gain time for the pilotless-bomb and the rocket to produce their effect it seemed impossible to maintain such a position in view of the imminent danger of a Russian irruption into German territory. Hider needed the demonstration of Russians on the East Prussian frontier, around Warsaw and across the upper Vistula, to convert him to the necessity of economising his troops by a drastic shortening of his commitments in the west. At one time he could have done that and safeguarded his bomb sites ; but, as in the east, he waited too long, and apparently the prospect of with- drawal' under the new conditions in the west counselled an attempt to fight it out in Normandy.

But, although it seemed only the lesser of two evils, Kluge judged that there was a chance of easing his position by a heavy blow at Avranches. At least, he must have reasoned, he should be able to disengage under cover of such a blow ; and the sequel is perhaps as important as anything that has so far occurred in Normandy. As far as one can discover the German attack never penetrated more than about three miles west of Sourdeval, and though, there and at Mortain, the pressure was maintained with the greatest stubbornness, the Americans yielded no more ground. That was a triumph ; and it is probable that •it was Kliige's first surprise. He underestimated the American tactical ability completely. His second mistake was his underestimate of the force of Patton's Third Army already operating on his flank and its determination and ability to threaten encirclement.

The attempt at Avranches was maintained for nearly a week, with all the reinforcements Kluge could summon. Only when Patton's flank thrust became an imminent menace was the first withdrawal begun ; and, now that it seems as if the latest strategy is a reversion to that of cutting losses, it has become very doubtful if this is not, once more, much too late. Hauser's Seventh Army, at all events, will secure no further reinforcements even to assist it to disengage. It is possible that some of the armour has escaped in the night. That would indeed rub a little of the gilt off the gingerbread. But the plain fact is that the signt of disorder are far from general, that the fighting is still stubborn in some sectors, and that the Germans do not fight " as if they knew they were beaten." This may matter little. If they stand, they will be destroyed, all the more surely since Kliige will have his hands full in the south. Another piece has been placed on the chess- board. The pattern assumes an even more convincing shape ; and, if we can judge by the Normandy battles, the Allies have moved another considerable step towards victory.