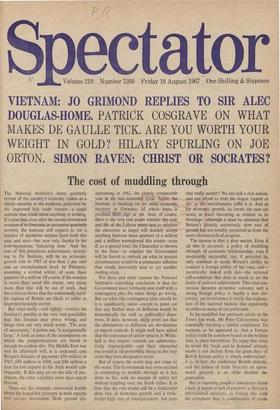 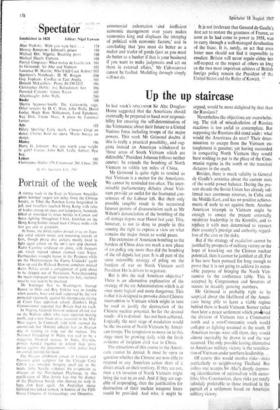 The cost of muddling through

The National Institute's latest quarterly review of the country's econoniy comes as a timely antidote to the euphoria generated by the improved July trade outturn—a single statistic that could mean anything or nothing. It is true that, even after the second downward revision of its forecasts in successive quarterly . reviews, the Institute still expects to see a balance of payments surplus (just) both this year and next—but now only thanks to the ever-mysterious `balancing item.' And the cost of this precarious achievement, accord- ing to the Institute, will be an economic growth rate in 1967 of less than I per cent and an unemployMent level, by February, assuming a normal winter, of some three quarters of a million. Of course, if the weather is worse than usual this winter, very many more than that will be out of work. And the evidence shows that the traditionally hard- hit regions of Britain are likely to suffer as disproportionately as ever.

But what really—and rightly—worries the Institute's pundits is the very real possibility that this forecast may prove wrong, and things turn out very much worse. 'The area of uncertainty,' it points out, 'is exceptionally large.' A look at some of the assumptions on which the prognostications are based is enough to confirm this. The Middle East war and its aftermath will, it is reckoned, cost Britain's balance of payments £50 million in 1967, £80 million in 1968, and £40 million a year (in lost exports to the Arab world) sub- sequently. If this may err on the side of pes- simism, the other variables more than cancel this out.

There are, for example, substantial doubts about the hoped-for recovery in, both exports and private investment. Both proved dis- as yet. And, of coUise, there is the very real doubt whether the rank and file of the Labour party (not to mention the electorate at large) will docilely accept anything between three quarters of a million and a million unemployed this winter—even if, as a special treat, the Chancellor is thrown to the lions—or whether the Government will be forced to embark on what in present circumstances would be a premature reflation that would inexorably lead to yet another sterling crisis.

For these and other reasons the National Institute's overriding conclusion is that the Government must forthwith arm itself with a contingency plan for when things go wrong. But on what this contingency plan should be it is significantly silent—except to point out that any further dose of deflation would be economically (as well as politically) disas- trous. It does, however, shyly point out that the alternatives to deflation are devaluation or import controls. It might well have added that the consensus of senior opinion in White- hall is that import controls are administra- tively impracticable—and their attempted use would in all probability bring on the very crisis they were designed to avert. that really matter? We are still a rich nation, ......and can afford to treat the slogan 'export or ip'. as the 'melodramatic piffle it is. And as 0.,r economic growth, its curses are now (to aLsome, at least) becoming as evident as its blessings --although it must be admitted that Britain's already notoriously slow rate of growth haS not notably protected us from the more obvious evils of progress.

The answer is that it does matter. Even if all this is accepted, a policy of muddling through, of economic brinkmanship, even if moderately successful, can, if persisted in, only continue to erode Britain's ability to conduct a foreign policy of her own, and--; inextricably linked with this—the national self-confidence that does so much to set the limits of national achievement. This vital con- nection between economic solvency and a strong foreign policy is hardly a new dis- covery, yet its existence is surely the explana- tion of the national malaise that apparently mystifies so many of our politicians. commercial exhortation ,-and ineffiCient economic management over years makes economics king and displaces the interplay of political with economic factors,' and in concluding that 'you must do better as a maker and trader of goods (just as you must do better as a banker if that is your business) if you want to make judgments and act on them in external affairs,' Mr Calvocoressi cannot be faulted. Muddling through simply will not do. It is not itreleVant that General de Gaulle's first act to restore the greatness of France, as Moon as he had come to power in 1958, was to carry through a well-managed devaluation of the franc. It is, surely, an act that even lesser men should not find it impossible to emulate. Britain will never regain .either her self-respect or the respect of others so king as the two most important arbiters of British foreign policy remain the President `tit The United States and the Ruler of Ktdvait.