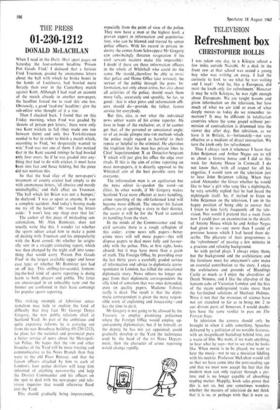 When I read in the Daily Mail sport pages on Saturday the four-column headline 'Poison Pen Goads Fred,' I deduced that a furious Fred Trueman, goaded by anonymous letters about the ball with which he broke boneS in the hands of Luckhurst, had bowled more fiercely than ever in the Canterbury match against Kent. Although I had read an account of the match already in another newspaper, the headline forced me to read this one too. Obviously, a good 'read-me' headline: give the sub-editor who thought of it a rise.

Then I checked back. I found that on this Friday morning, when Fred was goaded by 'dozens of poison pen letters,' there were only two Kent wickets to fall (they made one run between them) and only five Yorkshiremen needed to bat in order to finish a match which, according to Fred, 'we desperately wanted to win.' Fred was not one of them. I also noticed that in the Kent second innings he had bowled only four overs. So if he was goaded into any- thing that had to do with cricket, it must have been into fast and fierce fielding, but the piece did not mention this.

So that the lead slice of the newspaper's treatment of county cricket had simply to do with anonymous letters, 'all abusive and mostly unintelligible,' and their effect on Trueman. 'The ball which hit Brian was not a bumper,' he declared. 'I was as upset as anyone. It was a complete accident. And today's booing made me try all the harder.' He tossed the letters aside: 'I won't lose any sleep over that lot.'

The author of this piece of misleading sen- sationalism, Mr Alex Bannister, does not usually write like this. I wonder (a) whether the sports editor asked him to make a point of dealing with Trueman and his unpopularity with the Kent crowd; (b) whether he origin- ally sent in a straight cricketing report, which was then changed by the night staff into some- thing that would carry 'Poison Pen Goads Fred' in the largest available upper and lower case type; or whether Mr Bannister just had an off day. This sniffing-for-scandal, foment- ing-the-boil kind of sports reporting is doing harm to both players and public. The latter are encouraged in an unhealthy taste and the former ace confirmed in their basic contempt for popular sports reporting.

This striking example of laborious sensa- tionalism may help to explain the kind of difficulty that may face Mr George Denys Gregory, the new public relations chief at Scotland Yard. As part of the ambitious and quite expensive reforms he is carrying out from the new Broadway building (01-230-1212), he plans for the national and provincial press a better service of news about the Metropoli- tan Police. He hopes that the CID and other branches of the Yard will be more trusting and communicative to his News Branch than they were to the old Press Bureau; and that the liaison officers attached by him to each of London's four police districts will keep him informed of anything newsworthy and help the District Commander and his officers on the spot to deal with the newspaper and tele- vision inquiries that would otherwise flood into the Yard.

This should gradually bring improvement, especially from the point of view of the police. They now have a man at the highest level, a proven expert in information and popularisa- tion, who can be blamed and trusted by senior police officers. With his record in private in- dustry (he comes from Schweppes) Mr Gregory can convincingly threaten resignation if his civil servant masters make life impossible: I doubt if there are three information officers

in the whole of Whitehall who could do the same. He shouldatherefore be able to insist

that police and Home Office take seriously the service of the public through the press. In- formation. not only about crime, but also about all activities of the police, should reach them more fully, accurately and speedily. So far, so good: that is what press and information offi- cers should do—provide the fullest, fastest service for everybody.

But this, alas, is not what the individual news editor wants of his crime reporter. He lives in hope of the exclusive; or, if he cannot

get that, of the personal or sensational angle; or of an inside glimpse into CID methods which

the police might regard as harmful to their repute or helpful to the criminal. He cherishes the tradition that his man has private lines to Chief Superintendent X or Detective-Sergeant Y which will just give his office the edge over rivals. If this is the aim of crime reporting on most newspapers, it is directly opposed to the Whitehall aim of the best possible story for everyone.

The information man is an egalitarian but the news editor is—pardon the word—an elitist. In other words, if Mr Gregory makes Scotland Yard more efficient at news handling, crime reporting of the old-fashioned kind will become more difficult. The smarter his liaison officers are at spotting a story in their district, the easier it will be for the Yard to control its handling from the start.

In the minds of the Commissioner and the civil servants' there is a rough syllogism of this order: crime news sells papers—better crime news will sell more papers—this will dispose papers to deal more fully and favour- ably with the police. This, at first sight, looks absurd; but it may have more than a grain of truth. The Foreign Office, by providing over the last thirty years a carefully graded service of information and advice to diplomatic corre- spondents in London, has killed the sensational diplomatic story. News editors no longer ex- pect from their diplomatic correspondents the silly kind of sensation that was once demanded, even on quality papers. Madame Tabouis really is dead. The result is that the diplo- matic correspondent is given the more respon- sible work of explaining and forecasting—and has the time to do it.

Mr Gregory is not going to be allowed by the Treasury to employ promising policemen where the Foreign Office would employ up- and-coming diplomatiVs; but if he himself, or the deputy he has not yet appointed, could gradually develop at the Yard the techniques used by the head of the ro News Depart- ment, then the character of crime reporting would change rapidly.