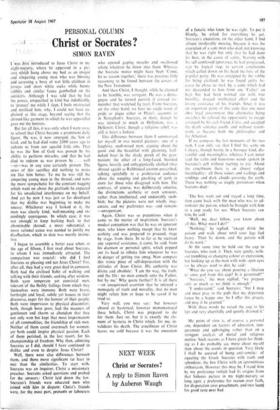 I was ,first introduced to Jesus Christ in my

nigh, . t-napery, where he appeared in a pic- ture Which hung above my bed as an insipid and simpering young man who was blessing

But for all this, it was only when I went away to school that Christ became a prominent daily figure. He was, it now emerged, the Son of God, and he had died some 2,000 years ago to redeem us from our squalid little sins. That he was the Son of God was proven by his ability to perform miracles, and that he had died to redeem us was proven by . . . well —er—was in any case certainly proven. The news of this sacrifice did nothing to make me like him better. To me he was still the simpering young man in the shroud, and none the more sympathetic for the constant nagging which went on about the gratitude he expected for his unsolicited interference on my behalf.

And yet by now I was just so far developed that my dislike was beginning to make me uneasy. Whichever way I looked at it, the man was clearly kind, well-meaning and ex- ceedingly courageous. In which case, it was not enough to keep harking back to that abominable shroud; a more substantial, a more rational cause was needed to justify my disaffection, which to date was merely instinc- tive.

I began to assemble a better case when, at the age of fifteen, I first read about Socrates, to whom I was immediately attracted. The comparison was crucial: why did I find Socrates so pleasing and not Jesus Christ? For, after all, they had a very great deal in common.

Both had the civilised habit of walking and talking with their friends, seeking after wisdom.

Both sere temperate yet convivial men, tolerant of the fleshly failings from which they themselves were immune. Both were brave, forthright and loyal, subtle yet honest in their discourse, eager for the honour of their people. Both were impervious to physical discomfort; both, though born poor, had the manners of gentlemen and charm so abundant that they not only won but kept that most impermanent of all commodities, the friendship of rich men. Neither of them cared overmuch for women; yet both could inspire physical passion. Each of them perished, in the last resort, for his championship of freedom. Why then, admiring Socrates as I did, should I have continued to dislike and even to despise Jesus Christ?

Well, there were also differences between them, and these more significant (at least to me) than the similarities. To start with, Socrates was an inquirer, Christ a missionary preacher. Socrates asked questions and probed for the answers: Christ laid down the law. Socrates's friends were educated men who joined with him in dispute; Christ's friends were, for the most part, peasants or labourers

who opened gaping mouths and swallowed whole whatever he threw into them. Whereas the Socratic motto might have been 'Come, let us reason together,' there was precious little reasoning to be found between the covers of the New Testament.

And then Christ, I thought, while he claimed to be humble, was arrogant. He was a dema- gogue and he turned peevish if crossed (re- member that wretched fig tree). From Socrates, on the other hand, we hear no single word of pride or pique either in Plato's accounts or in Xenophon's. Socrates, in short, though he was inimical to much in Hellenism. was a Hellenist; Christ, though a religious rebel, was still at heart a Judaist.

This difference between them I summarised for myself in two mental pictures: one of a laughing, snub-nosed man, arguing about the good and the beautiful- with gleaming, half- naked boys in the shady porch of the gym- nasium; the other of a long-faced, bearded figure, heavily and unhygienically clothed (that shroud again) as Rabbinical custom prescribed. talking spitefully to a proletarian audience about the weeping and gnashing of teeth in store for those who disagreed with him. The contrast, of course, was deliberately emotive, the distinctions aesthetic or even sensuous. rather than intellectual, and undeniably snob- bish; but the pictures were not wholly inac- curate, and my preference was—and remains —unrepentant.

Again, Christ was so pretentious when it came to the matter of inspiration. Socrates's modest contention was that he was an ignorant man, who knew nothing except that he knew nothing and was prepared to proceed, stage by stage, from there. In so far as he received any supernal assistance, it came, he said, from his daemon or personal spirit, which popped out its head to rebuke him whenever he was in danger of getting too smug. Now compare this ironic piece of self-deprecation with the attitudes of Jesus Christ. His authority was divine and absolute: 'I am the way, the truth, and the life: no man cometh unto the Father, but by me.' Why quote further? It is all there —an unequivocal assertion that he enjoyed a monopoly of truth and morality, that no man might refute him or hope to be saved if he tried to.

Very well, you may say : but however absurd or hysterical, however monomaniacal these beliefs, Christ was prepared to die for them. Just so; but it is exactly the ele- ment of hysteria in Christ which, for me, in- validates his death. The crucifixion of Christ leaves me cold because it was the execution

of a fanatic who knew he was right. To put it bluntly, he asked for everything he got. Socrates's execution, on the other hand, I find almost intolerably moving, because it was the execution of a sane man who died, not, knowing that he was right but only that he had done his best, in the cause of sanity. Starting with his self-confessed ignorance, he had progressed, step by logical step. to certain conclusions which called down on his head the fury of the poptilai party. He was arraigned by the rabble for being civilised: he was found guilty be- cause he chose to stick by a code which had not descended to him from any 'Father' on high but had been worked out with true humility, dogged intellectual effort and the loving assistance of his friends. Since it was an important point of this code that one must obey legal government (the alternative being anarchy), he refused the opportunity to escape arranged by his rich friend, Crito, and accepted the death sentence coolly and without resent- ment, as became both the philosopher and the Athenian.

If we compare the last moments of the two men, I can only say that I find the scene on Calvary, though heroic in a baroque kind, dis- tasteful and meaningless, whereas I can never read the calm and humorous words spoken in Socrates's cell without starting to cry. About the crucifixion there is an almost vulgar theatricality : all those voices and wailings and rendings and dark clouds covering the earth. There was nothing so stagily portentous when Socrates died : 'The boy went out and stayed a long time, then came back with the man who was to ad- minister the poison, which he brought with him in a cup ready for use. When Socrates saw him, he said: "Well, my dear fellow, you know about all this. What must I do?"

"Nothing," he replied, "except drink the poison and walk about until your legs feel heavy. Then lie down, and the poison will do its work."

At the same time he held out the cup to Socrates, who took it. Then, very gently, with- out trembling or changing colour or expression, but looking up at the man with wide open eyes las he always used to do), he said :

"What do you say about pouring a libation to some god from this cup? Is it permitted?"

"Socrates," the man replied, "we prepare only as much as we think is enough."

"I understand," said Socrates; "but I may and must pray to the gods that my departure hence be a happy one. So I offer this prayer, and may it be granted."

With these words he raised the cup to his lips and very cheerfully and quietly drained it?

My point of view is, of course, a personal one, dependent on factors of education, tem- perament and upbringing rather than on a stringent analysis of moral and religious motive. Such reasons as I have given for think- ing as I do probably say more about myself than about the events in question. Very likely I shall be accused of being anti-semitic: of equating the Greek Socrates with truth and splendour, the Jew Christ with an ignominious enthusiasm. However this may be, I stand firm by my preference (which had its origins from that hideous picture in my night-nursery so long ago), a preference for reason over faith, for disputation over preachment, and (not least) for good taste over bad.