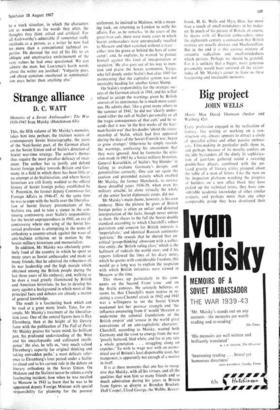 This, the fifth volume of Mr Maisky's memoirs. takes him into perhaps the trickiest waters of contemporary Soviet historiography, the years of the Nazi-Soviet pact, of the German attack on the Soviet Union and of Stalin's direction of Soviet war-time strategy. The author's themes thus require the most peculiar delicacy of treat- ment. The author has to justify and defend Soviet foreign policy towards Britain and Ger- many in a field in which there has been little or no attempt at de-Stalinisation, and where Soviet historians are still firmly wedded to the official history of Soviet foreign policy established by V. Potemkin, the former deputy Commissar for, Foreign Affairs in 1946-47. At the same time he was to cope with the battle over the liberalisa- tion of Soviet literary presentations of the,_ Stalinist era, and to take a stance in the con- tinuing controversy over Stalin's responsibility for the Soviet unpreparedness in 1941, an era of controversy where one wing of the Soviet his- torical profession is attempting in the name of orthodoxy a counter-attack against the wave of anti-Stalinist criticism set in motion by the. Soviet military historians and memorialists.

In addition, Mr Maisky was obviously genu- inely fond of the country in which he spent so many years as Soviet ambassador and made so many friends, that he admired the robustness of.. its war leadership and the high morale which obtained among the British people during the last three years of his embassy; and, walking as he does a road greatly illuminated by British and American historians, he has to develop his story against a background in which most of the principal facts and debates are already a matter- of general knowledge.

The result is a fascinating book which can be read at a great many levels. Take, for ex- ample, Mr Maisky's treatment of the liberalisa- tion issue. One of the central figures here is Ilya Ehrenburg, then at the height of his literary fame with the publication of The Fall of Paris. Mr Maisky praises his 'acute mind, his brilliant pen, his profound understanding of the West and his encyclopaedic and cultivated intelli- gence.' He also, he tells us, 'very much valued Ehrenburg's capacity for original thinking and taking untrodden paths,' a most delicate refer- ence to Ehrenburg's later period under a Stalin- ist cloud and to his current role in the debate on literary orthodoxy in the Soviet Union. On Molotov and the Stalinist terror he relates a truly fascinating incident,-how when he was recalled to Moscow in 1943 to learn that he was to be appointed deputy foreign Minister with special responsibility' for planning for the postwar settlement, he insisted to Molotov, with a mean- ing look, on returning to London to settle his affairs. For, as he remarks, 'in the years of the great-man cult, there were many cases in which Soviet ambassadors were unexpectedly recalled to Moscow and then vanished without a trace --- either into the grave or behind the bars of some camp'; and, he explains, he wanted 'to protect himself against this kind of interpretation or suspicion.' He also goes out of his way to men- tion and praise the Soviet economist, Varga, who fell deeply under Stalin's ban after 1945 for maintaining that the capitalist system was not inevitably heading for another Great Slump.

On Stalin's responsibility for the strategic suc- cess of the German attack in 1941, and his wilful refusal to accept the warnings given by British sources of its imminence, he is much more cauti- ous. He admits that, 'like a great many others in the summer of 1941,' he did not 'clearly under- stand either the cult of Stalin's personality or all the tragic consequences of that cult,' and he re- cords that it was 'in the first weeks of the Ger- man-Soviet war' that his doubts 'about the states- manship of Stalin, which had first appeared during the days of the Soviet-Finnish war, began to grow stronger.' Otherwise he simply records, the warnings, confessing his amazement that they were ignored. And he footnotes the criti- cism made in 1965 by a Soviet military historian. General Kurochkin, of Stalin's 'big blunder' in failing to evaluate Germany's designs and potentialities correctly. One can see again the caution and pretended naivety which enabled Mr Maisky, the former Menshevik, to survive those dreadful years 1936-39, when even his military attaché, let alone virtually the whole of the senior Soviet diplomatic corps, did not.

Mr Maisky's main theme, however, is his own embassy. Here the picture he gives of British foreign policy is often an unfair and distorted interpretation of the facts, though never untrue to them. He shares to the full the Soviet double standard according to which Churchill's robust patriotism and concern for British interests is 'imperialistic,' and identical Russian sentiments 'patriotic.' He reveals that he shared that un- critical 'group-thinking' obsession with a collec- tive entity, the 'British ruling class,' which is the hallmark of radicals the world over; and if his reports followed the lines of his diary notes, which he quotes with considerable freedom, this would go a long way to explain the suspicion with which British initiatives were viewed in Moscow at the time.

This shows up particularly in his com- ments on the Second Front issue and on the Arctic convoys. He seriously believes, or seems to, that Churchill's main motive in re- sisting a cross-Channel attack in 1942 and 1943 was a willingness to see the Soviet Union weakened lest her postwar strength and 'the influence emanating from it' would 'threaten to undermine the colonial foundations of the British empire' and 'arouse in the world great convulsions of an anti-capitalistic character.' Churchill, according to Maisky, wanted both Germany and the USSR to emerge from the war 'greatly battered, bled white, and for at any rate a whole generation . . . struggling along on crutches.' To wish to wage war with an econo- mical use of Britain's least dispensable asset, her manpower, is apparently not enough of a motive in itself.

It is at these moments that one has to recog- nise that Maisky, with all his virtues, and all the

qualities that won him so many friends and so much admiration during his years in Britain frorii figures as diverge as Brendan Bracken. Duff Coopef,,tiloyd 6eorge, the Webbs, Beaver- brook, H. G. Wells and Myra Hess, has more' than a touch of small-mindedness in his make- up. In much of his picture of Britain. of course, he shares with all Russian ambassadors since the eighteenth century a conviction that British motives are usually devious and Machiavellian. But in the end it is this curious mixture of romantic radicalism and small-mindedness which persists. Perhaps we should be grateful. For it is unlikely that a bigger, more generous personality would have survived all the vicissi- tudes of Mr Maisky's career to leave us these fascipating and invaluable memoirs.