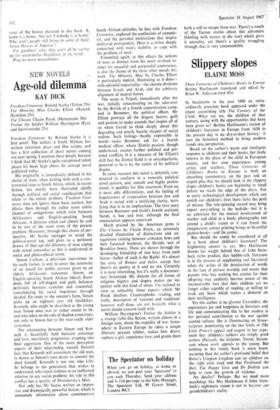 In Stockholm in the year 1900 an extra- ordinarily prescient book appeared under the (then) astonishing title The Century of the Child. What are we, the children of that century, doing with the opportunities that have been given us? Bettina Hurlimann's review of children's literature in Europe from 1650 to the present day is no dry-as-dust history: it uses the historical method to bring modern trends into perspective.

Based on the author's warm and intelligent response to children and their books, her lively interest in the place of the child in European, society, and her own experiences among artists and teachers, Three Centuries of Children's Books in Europe is both an. absorbing commentary on the past and an, urgent plea that we should look at the slippery slopes children's books are beginning to tread before we reach the edge of the abyss. For in every technological development which can enrich our children's lives there lurks the peril of- misuse. The tale-spinning record may bring expert story-telling to the bedside—but it is no substitute for the mutual involvement of. mother and child in a book; photography can extend a child's vision or it can freeze his imagination; colour printing brings us beautiful picture-books—and the comic.

But should the comic be considered at all in a book about children's- literature? The frightening answer is, yes. Mrs Hurlimann throws her weight behind that of John Stein- beck (who predicts that bubble-talk literature is in the process of supplanting real literature) when she writes of the devaluation of words in the face of picture worship and warns that parents who buy nothing but comics for their offspring may suddenly become aware of the inconceivable fact that their children are no longer either capable of reading, or willing to read, any book which makes a demand on their intelligence.

Yet this author is no gloomy Cassandra; she experiences joy and happiness in literature and life and communicating this to her readers is her personal contribution to the war against canned culture. She is illuminating on Struw- welpeter, penetrating on the two levels of The Little Prince's appeal and cogent in her argu- ment that children's authors are simply good writers (Perrault, the Grimms, Twain, Steven- son) whose work appeals to the young. But nothing in this timely book is more heart- warming than the author's profound belief that Babar's Utopian kingdom can set children on the right civic road and that Ferdinand the Bull, The Happy Lion and Dr Dolittle can help to stem the growth of violence.

An idealist? Perhaps. But we need more watchdogs like Mrs Hurlimann if John Stein- beck's nightmare vision is not to become our grandchildren's reality.