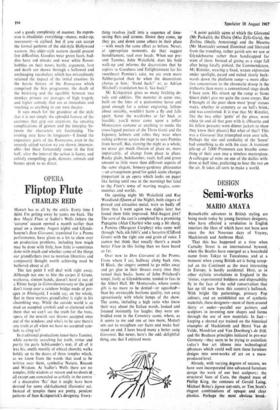 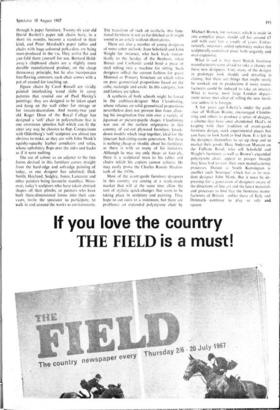 Remarkable advances in British -styling are being made today by young furniture designers, who have effected a revolution in English interiors the likes of which have not been seen since the Art Nouveau days of Voysey, Mackintosh and Ambrose Heal.

That this has happened at a time when Carnaby Street is an international byword, when the Beatles have emerged as a household name from Tokyo to Tuscaloosa, and at a moment when young British art is being accep- ted on the Continent as the most interesting in Europe, is hardly accidental. Here, as in other stylistic revolutions in England in the 'sixties, experimental boldness and disposability fly in the face of the solid conservatism that has up till now been this country's hallmark. With bright Op pattemings, primary Pop colours, and an uninhibited use of synthetic materials, these designers—most of them around thirty or under—parallel our painters and sculptors in inventing new shapes and forms through the use of new materials. In fact— keeping a shrewd eye trained on the historical examples of Mackintosh and Henri Van de Velde, Mondrian and Van Doesburg's de Stijl, and the Bauhaus principles initiated in pre-war Germany—they seem to be trying to assimilate today's fine art idioms into technological advances which could well turn these furniture designs into semi-works of art on a mass- produced level.

' Already, with varying degrees of success, we have seen incorporated into advanced furniture design the work of our best sculptors: the structural lines of Caro, the shaped mass of Phillip King, the contours of Gerald Laing, Michael Bolus's jigsaw-cut-outs, or Tim Scott's elegant combinations of opaque and clear plastics. Perhaps the most obvious break- through is paper furniture. Twenty-six year old David Bartlett's paper tub chairs have, in a short six months, become a standard in their kind, and Peter Murdoch's paper tables and chairs with huge coloured polka-dots are being mass-produced in the us. They arrive flat and you fold them yourself for use. Bernard Hold- away's chipboard chairs are a slightly more durable manufactured product, on the cheap throwaway principle, but he also incorporates free-flowing contours; each chair comes with a pot of enamel for touching up.

Jigsaw chairs by Carol Russell are vividly painted interlocking wood slabs in curvy patterns that remind one of Paul Huxley's paintings; they are designed to be taken apart and hung on the wall either for storage or for instant-decoration. And twenty-two year old Roger Dean of the Royal College has designed a 'soft' chair in polyurethane that is one enormous spineless ball which can fit the sitter any way he chooses to flop. Comparisons with Oldenburg's 'soft' sculpture are almost too obvious to make, as they are with John Monk's squishy-squashy leather armchairs and sofas, whose upholstery flops over the sides and backs as if it were melting.

The use of colour as an adjunct to the free forms devised in this furniture comes straight from the hard-edge and soft-edge painting of today, as one designer has admitted; Dick Smith, Hoyland, Sedgley, Jones, Lancaster and other painters being favourite standbys. More- over, today's sculptors who have taken abstract shapes off their plinths, or painters who have built three-dimensional forms into their can- vases, invite the spectator to participate, to walk in and around the works as environments. The transition of such an aesthetic into func- tional furniture is not as far-fetched as it might sound in an article without illustrations.

There are also a number of young designers of more sober outlook: Jean Schofield and John Wright for instance, who hark back roman- tically to the heyday of the Bauhaus, when Breuer and Corbusier could bend a piece of steel tubing into a machine for sitting. Such designers reflect the current fashion for grave Minimal or Primary Structure art which relies on pure geometrical proportions based on the cube, rectangle and circle. In this category, fun and fantasy are taboo.

A synthesis of both schools might be found in the architect-designer Max Clendinning, whose reliance on solid geometrical proportions nevertheless does not prevent him from allow- ing his imagination free rein over a variety of jigsawed or picture-puzzle shapes. Clendinning was one of the earliest originators in this country of cut-out plywood furniture, knock- down models which snap together, ideal for the itinerant bed-sitting-room generation. Yet there is nothing cheap or shoddy about his furniture, as there is with so many of his imitators. Although he may use only three- or four-ply, there is a sculptural mass to his tables and chairs which his copiers cannot achieve. He may easily prove the Charles Rennie Mackin- tosh of the 1970s.

Most of the avant-garde furniture designers in this country are aiming at a ready-made market that will at the same time allow the sort of stylistic quick-changes that seem to be taking place in sculpture and painting. They hope to cut costs to a minimum, but there are problems: an expanded polystyrene chair by Michael Brown, for instance, which is made in one complete piece. should sell for around £7 and with care last a couple of years. Unfor- tunately, necessary added upholstery makes this sculpturally -conceked piece both ungainly and over-expensive.

What is sad is Mai most British furniture manufacturers seem afraid to take a chance on these new designers. True, many of the designs in prototype look shoddy and detailing is clumsy, but these are things that might surely he worked out in production if more manu- facturers could be induced to take an interest. What is worse, most large London depart- ment stores steer clear of selling the new furni- ture unless it is foreign.

A few years ago Liberty's, under the guid- ance of William Braine, encouraged Clendin- ning and others to produce a series of designs, a scheme they have since abandoned. Heal's, in keeping with their tradition of avant-garde furniture design, stock experimental pieces but you have to look hard to find them. It is left to the designers themselves to set up shop and to market their goods. Here Anderson Manson on the Fulham Road, who sell Schofield and Wright's furniture as well as Brown's expanded polystyrene chair, appear to prosper though they have had to start their own manufacturing processes. Datum at South Kensington is another such 'boutique' which has as its resi- dent designer John Monk. But it must be de- pressing for a generation of designers aware of the directions of fine art and the latest materials and processes to lind that the furniture manu- facturers of Britain unlike those of Italy and Denmark—continue to play so safe and square.