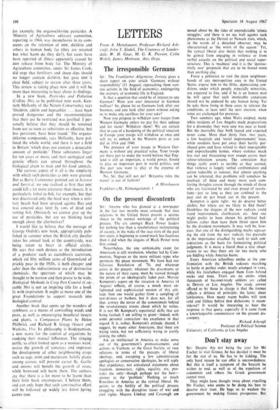 On the present discontents

Sir: Anyone who has glanced at a newspaper in the last two months must concede that race relations in the United States present a serious threat to the normal workings of the political process. The cry amongst Black Power leaders for nothing less than a revolutionary restructuring. of society, in the wake of the race riots of the past two years, is beginning to sound much less facetious than it did when the slogans of Black Power were first coined.

Nevertheless, the one unthinkable event for Americans is still revolution, whether led by Com- munists, Negroes or the more militant types who permeate the peace movement. We have had our Glorious Revolution of '76, and whatever exists in the present, whatever the discontents or the nature of their cause, must be viewed through the prism of an ideologically laden past. Murray Kempton's report on the situation in America (4 August) reflects, of course, a much more en- lightened and sophisticated version of this atti- tude than one would gather from a sampling of taxi-drivers or barbers, but it does not, for all that, convey the terror of the commitment behind the revolutionary events about which he writes. It is not Mr Kempton's reportorial skills that are being faulted; I am willing to grant—indeed, with some personal conviction—his excellence in that regard. It is, rather, Kempton's attitude, shared. I suggest, by many other Americans, that these are trying times, but not sufficiently trying to justify joining the rebels.

Ask an intellectual in America to make sense out of the government's pronouncements and actions in Vietnam, or the Great Society, or race relations in terms of the precepts of liberal ideology, and, excepting a few administration apologists or conservative ideologies, he will reply that expediency, not articulated statements about freedom, democracy, rights, equality. etc, pro- vides the only—though perhaps not the best— answer to the 'problem.' Nothing so much flourishes in America as the cynical liberal. He points to the futility of the political process struggling with the disruptive issues of war and civil rights. Mayors Lindsay and Cavanagh are tossed about by the tides of unpredictable 'ethnic struggles.' and there is no sea wall against such phenomena as the Detroit or Newark riots, which, in the words of a detached observer. may be characterised as 'the worst of the season.' Yet, the cynical liberal also insists that nothing is to be gained from engaging in violence or from verbal assaults on the political and social super- structure. This is 'madness and it is the 'destruc- tively new' proposals that are to be feared more than anything else.

Force a politician to visit the slum neighbour- hoods of any metropolitan area in the United States, expose him to the filthy, depreciating con- ditions under which people, especially minorities, are expected to live, and if he is an honest man he will agree that such intolerable conditions should not be endured by any human being. Yet he asks those living in these areas to tolerate the conditions, at least until the next election, when votes are exchanged for promises.

Two summers ago, when Watts erupted, many white residents of Los Angeles made preparations for a doomsday they were sure was near at hand. But the inevitable they both feared and expected never came. More than thirty lives two years, a few hospitals and 'social improvements' later, white residents have put away their hastily pur- chased guns and have retired to their impregnable and unpurchasable homes, where violence much less real and threatening now sweeps across their colour-television screens. The conviction that things really aren't as terrible as they seemed, that violence is largely verbal confrontation and action reducible to rumour, that almost anything can be tolerated, that problems will somehow be resolved, all these and many more such com- forting thoughts course through the minds of those who are fascinated by and even proud of revolu- tions—just so long as they are confined to the past and do got break out in the present.

Kempton is quite right: we do deserve better cliches, but where are we likely to find them? Doubtless the slogans of the new radicals could stand improvement, clarification. etc. And one might prefer to have chosen his political bed- fellows rather than have them thrust upon him by the dissident movements. It may well be, how- eyer, that one of the distinguishing marks separat- ing the old from the new radicals lies precisely in the importance attached by each to such con- siderations as the basis for formulating political judgments. It is more a literal than a trite obser- vation to say that there are far too many who are fiddling while America burns.

Every American schoolboy smiles at the con- frontation with the British redcoats marching to battle in perfect order, neatly arranged in rows, while his forefathers engaged them from behind rocks and trees. There are no smiles what thousands of bayonet-ready soldiers are called to Detroit or Los Angeles. The ready answer offered us by those in charge is that the former reflects a defence of principle; the latter, sheer laWlessness. How many warm bodies will turn cold and lifeless before that dichotomy is recon- sidered? It would be interesting to hear the response to that query, especially if it came from a knowledgeable commentator on the present dis- contents.