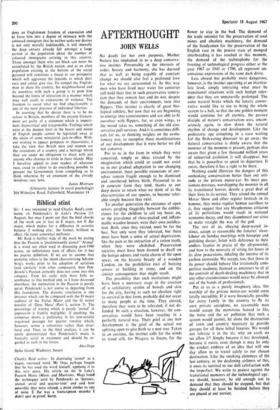 No doubt for her own purposes, Mother Nature has implanted in us a deep conserva- tive instinct. Presumably in the interests of order, beauty and harmony, -she has decreed that as well as being capable of constant change we should also feel a profound love for what we are accustomed to. In this way men who have lived near water for centuries still hold their feet in such preservative venera- tion that they remain feet and do not, despite the demands of their environment, turn into flippers. This instinct is clearly of great bio- logical subtlety, but now that we are beginning to emerge into consciousness and are able to fit ourselves with flippers, fur, or even wings, as the mood takes us, something of the old con- servative pull survives. And it is sometimes diffi- cult for us, as thinking twiglets on the evolu- tionary tree, to recognise those manifestations of our development that it were better we did not conserve.

Put to us in the form in which they were conceived, simply as ideas created by the imagination which could or could not assist us in our gradual adaptation to our changing environment, these possible extensions of our- selves remain fragile enough to be dismissed and smothered before birth. Presented to us in concrete form they tend, thanks to our deep desire to retain what we think of as the characteristics of our species, to become toler- able simply because they exist.

To another generation the existence of open sewers gurgling sluggishly between the cobble- stones for the children to sail toy boats on, or the prevalence of close-packed and inflam- mable wooden houses, were their own justifica- tion. Both, since they existed, must be for the best. Not only were they tolerated, but there must have been a sense of actual deprivation, like the pain at the extraction of a rotten tooth, when they were abolished. Preservation societies must have been formed to dwell on the benign odours and rustic charm of the open sewer, on the historic beauty of a wooden London, on the prohibitive cost of burying sewers or building in stone, and on the sinister consequences that might result.

The possibility that such institutions might have been a necessary stage in the creation of a satisfactory system of bowels and skin for the city, having as such no absolute right to survival in that form, probably did not occur to many people at the time. They existed, therefore they were to be tolerated, if not de- fended. In such a situation, however, the con- servatives would have been reacting in a perfectly natural way. Their grief at any new development is the grief of the actual nut splitting open to give birth to a new tree. Taken to an extreme, the instinct calls for the winds to stand still, for Niagara to freeze, for the flower to stay in the bud. The demand of the trade unionist for the preservation of coal mines and obsolete machinery, the demand of the Sandysman for the preservation of the English race in the precise state of mongrel interbreeding it has reached at this moment, the demand of the technophobe for the freezing of technological progress either at the year 1967 or 1945 or 1700, all represent un- conscious expressions of the same dark drive.

Less absurd but probably more dangerous, however, is the instinct operating at an inarticu- late level, simply tolerating what must be transitional situations with such benign toler- ance that they are unnaturally prolonged. The same natural brake which the lunatic conser- vative would like to use to bring the whole system to a halt, so that the one golden moment would continue for all eternity, the passive disciple of nature's conservatism uses, uncon- sciously again, to slow down the natural rhythm of change and development. Like the prehistoric ape crouching in a cave waiting for the flesh-eating dinosaur to go away, the natural conservative is dimly aware that the monster of the moment is present, perhaps also aware that given a few thousand million years of unhurried evolution it will disappear, but that he is powerless to speed its departure. It exists, therefore it has a right to be there.

Nothing could illustrate the dangers of this unthinking conservatism better than our atti- tude to the private motor-car. Its most pas- sionate devotees, worshipping the monster in all its transitional horror, devote a great deal of their lives to its service. They attend the annual Motor Show and other regular festivals in its honour, they make regOlar human sacrifices to it, they suggest that any blasphemous criticism of its perfections would result in national economic decay, and they disembowel our cities to make straight the way of the god.

The rest of us, obeying deep-seated in- stinct, accept as reasonable the fanatics' slave- labour on Sunday mornings with hosepipe and polishing duster, listen with deference to their endless litanies in praise of the all-powerful, and bow to the necessity of sitting for hours in its slow processions, inhaling the incense of its arbon monoxide. We accept, too, that those in its power should behave like irrationally com- petitive madmen, licensed as amateurs to sit at the controls of death-dealing machinery that in any other circumstances would never be allowed out of the hands of professionals.

Put to us as a purely imaginary idea, this worship of the private motor-car would seem Totally incredible. If it were financially possible for every family in' the country to fly its own private aeroplane, no reasonable man would accept the monstrous hazard to life, the noise and the air pollution that such a system would permit, let alone the destruction of town and country necessary to provide garages for all these lethal luxuries. We would not tolerate it in the air, why on earth do we allow it? Simply because it has developed, because it exists, even though it may be only the crudest embryo of an idea that will one day allow us to travel safely to our chosen destination. Like the smoking chimneys of the last century, or the deafening airliners of this, it owes its survival to our dull satisfaction with the imperfect. We write to protest against the transitional monsters of the- technological age: we should, however, be old enough not to demand that they should be stopped, but that they should at least be finished before they

are placed at our service. .