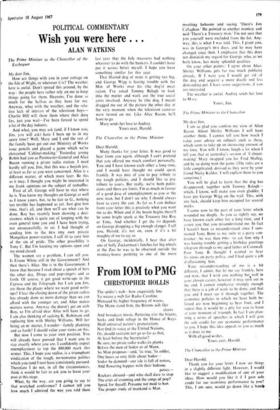 Wish you were here .

The Prime -Minister to the Chancellor of the Exchequer

How are things with you in your cottage on the Isle of Wight, or wherever it is? The weather here is awful. Don't spread this around, by the way: the people here rather rely on me to keep things going for them. Heavens, I've done as much for the Scilloes as they have for me.

Anyway, what with the weather, and the rela- tive lack of interest of the television boys—

Charlie Hill will show them where their duty lies, just you wait—I've been forced to spend a lot of the day indoors.

spare time? Well, Mary and I and the rest of

the family have got out our Ministry of Works issue pencils and played a game which we've christened 'Cabinet-making.' Yesterday young Robin had you as Postmaster-General and Alice Bacon running a pirate radio station. I need hardly tell you, Jim, that this was a boyish jest, at least as far as you were concerned. Alice is a different matter, of which more later. Be this as it may, I thought you might be interested in my frank opinions on the subject of reshuffles. First of all, George will have to stay where he is. You know my thoughts on George as well as I know yours, but, to be fair to G., nothing too terrible has happened as yet. Just give him time, that's all, and then we'll see what can be done. Roy has recently been showing a deci- siveness which is quite out of keeping with the even general tone you and I have been trying, not unsuccessfully, to set. I had thought of

sending him to the DEA (my own private Mongolian power-station, I call it) to cure him

of the sin of pride. The other possibility is Tony C. But I'm keeping my options open and my mind closed.

The women are a problem, I can -tell you. Is Eirene White still in the Government? And

then there's Alice. She is in the Government. I

know that because I read about a speech of hers the other day. Drugs and pop-singers and so forth. Of course, it got good write-ups in the

Express and the Telegraph, but I ask you Jim. are those the places where we want good write- ups? I fear the closing down of the pirate radios has already done us more damage than we can afford with the younger set, and Alice makes matters worse. Anyway she doesn't get on with Roy, so I'm afraid dear Alice will have to go. I am also thinking of sacking K. Robinson and replacing him with Shirley Williams. Will her being an RC matter, I wonder—family planning and so forth? I should value your views on this.

But now I come to your own position. You will already have guessed that I want you to stay exactly where you are. I confidently expect unemployment to top the 800,000 mark this

winter. This, I hope you realise, is a triumphant vindication of the tough, no-nonsense politics which you (and I too) have consistently pursued. Therefore I do not, in all the circumstances, think it would be fair to ask you to leave your post at this stage.

What, by the way, are you going to say to that wretched conference? I cannot tell you how much I admired the way you told them last year that the July measures had nothing whatever to do with the bankers. I couldn't have put it across better myself. I hope you have something similar for this year.

That blasted dog of mine is getting too big, and George Wigg is having trouble with the Min. of Works over his (the dog's) meat ration. I've asked Tommy Balogh to look into the matter and work out the true social costs involved. Anyway he (the dog, I mean) dragged me out of the picture the other day at the very moment when the television cameras were turned on me. Like Alice Bacon, he'll have to go.

Mary sends her love to Audrey.