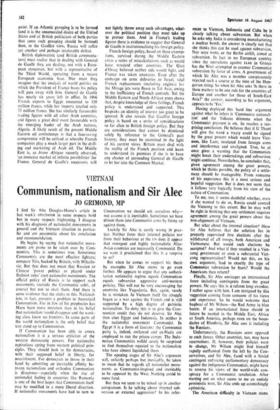 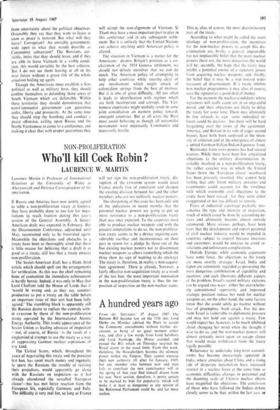 I find Sir Alec Douglas-Home's article in last week's SPECTATOR in some respects bold but in many respects frightening. I disagree with his diagnosis of nationalist movements in general and the Vietnam situation in particu- lar and am pessimistic about his conclusion and recommendation.

He begins by saying that nationalist move- ments are prone to be taken over by Com- munists. This is sometimes true. Sometimes Communists are the most effective fighters; compare Tito, backed by Britain, with Mihailo- vie. But that does not mean that Russian or Chinese 'power politics as played under Stalinist rules' start nationalist movements. The official policy of Russia is to support such movements (outside the Communist orbit, of course) but not to start them. And there is some evidence that she sticks to this. National- ism, in fact, presents a problem to theoretical Communism. For in few of his prophecies has Marx been more mistaken than in his belief that nationalism would disappear and the work- ing class know no frontiers. In some parts of the world nationalism is the only belief that `can stand up to Communism.

If Communism has been able to annex nationalism it is a serious criticism of the western democratic powers. For nationalist aspirations spring from western political prin- ciples. They should look to the democracies, with their supposed belief in liberty, for nourishment. For democrats to throw in their hand by admitting an inevitable affinity be- tween nationalism and orthodox Communism is disastrous—especially when the rise of nationalist feeling in countries like Rumania is one of the best hopes that Communism itself may be modified in a more liberal direction. If nationalist movements have had to turn to Communism we should ask ourselves why— not assume it is inevitable. Sometimes we have driven them into Communist arms by lining up against them.

Luckily Sir Alec is surely wrong in prac- tice. Neither from their internal policies nor from their behaviour at the UN does it appear that emergent and highly nationalistic Afro- Asian countries are necessarily Communist. Do we want it proclaimed that this is a surprise to us?

But when he comes to support his thesis by examples Sir Alec seems to go even further. He appears to argue that any authori- tarian nationalist regime equals Communism equals subversive aggressive anti-western policies. This will not be very encouraging for countries like Yugoslavia. But, again, surely he is mistaken. In Vietnam itself the struggle began as a war against the French and is still supported by a high degree of patriotic nationalism. To deny this is to give the Com- munists credit they do not deserve. Sir Alec then cites Egypt and Indonesia. In neither is the nationalist movement Communist. In Egypt it is a form of fascism: the Communist party is, indeed, outlawed and ex-Nazis are employed to run the prison camps. The Indo- nesian Communists would surely be surprised to find themselves equated to the nationalists who have almost liquidated them.

The opening stages of Sir Alec's argument will, unfairly perhaps but inevitably, be taken to mean that he regards all nationalist move- ments as Communist-inspired and inevitably to be opposed by the West. Nothing could be more fatal.

But then we seem to be mixed up in another comparison. Is he talking about internal sub- version or external aggression? In his refer-

ewes to Vietnam, Indonesia and Cuba he is clearly talking about subversion. But when be asks why India is considering manufacturing a nuclear bomb, the answer is clearly not that she thinks this can be used against Subversion. Nor were NATO, or the Berlin airlift, aimed at subversion. In fact in no European country since the operations against OAS in Greece has the West attempted to counter Communist subversion by force of arms. A government Of which Sir Alec was a member conspicuously rejected such a course at the time of the Hun- garian rising. So when Sir Alec asks 'Is there in these matters to be one rule for the countries of Europe and another for those of South-East Asia?' the answer, according to his argument, appears to be 'Yes.'

Having deployed this 'hard line argument against what he infers is 'Communist national- ism' and the 'hideous dilemma when the Communist pressure is on, he reaches a sur- prising conclusion. He believes that if U Thant will give the word a treaty could be signed by the great powers which would leave Viet- nam, like Laos, insulated from foreign arms and interference and unaligned. True, he at once gives a warning that the Communists might break their undertakings and subversion 'might continue. Nevertheless, he concludes that, given agreement among the great powers, which he thinks possible, the policy of a settle- ment should be manageable. From someone of his experience this is a most serious and hopeful suggestion. But it does not seem that it follows very logically from his view of the nature of Communism.

To me, too, it seems doubtful whether, even if she wanted to do so, Russia could control the Vietcong to this extent. But he may well be right in thinking that any settlement requires agreement among the great powers about the non-alignment of Vietnam.

But what about the internal situation? Here Sir Alec believes that the solution lies in properly supervised free elections after the withdrawal of all troops, both American and Vietnamese. But would such elections be accepted? And what if they resulted in a Viet- cong government or even a substantial Viet- cong representation? Would not this, on his own argument, lead to exactly the type of Communist subversion he fears? Would the Americans then return?

Finally, Sir Alec envisages an international force including contingents from the great powers. He says this is n reform long overdue. I-rather agree with him. I am intrigued by this suggestion coming from someone of his views and experience. So he would welcome that bugbear of Mr Wilson—the Red Army in blue berets. If an international force should in future be needed in the Middle East, Africa or South America, perhaps even on the boun- daries of Rhodesia, Sir Alec sees it including the Russians.

Unfortunately, the Russians seem opposed to such forces. Other countries, too, may have reservations. If, however, their policies were to change, Mr Wilson might find himself rapidly outflanked from the left by the Con- servatives, and Sir Alec, faced with a Soviet contingent enforcing parliamentary democracy against the indigenous Communists, might have to reverse his views of the world-wide con- spiracy for a Communist revolution. After starting out on what seems to me an unduly pessimistic note, Sir Alec ends up astonishingly optimistic.

The American difficulty in Vietnam stems

from uncertainty about the political objectives. Ostensibly they say that they want to leave as soon as peace is restored. But what will they leave? Corruption? An unstable government, wide open to what they would describe as :Communist subversion? The Russians, cer- ' tainly, insist that tits), should leave, and if they

are able to ,leave Vietnam in a viable condi- . lion, this would certainly be the best solution.

But, do not see them leaving at all in the near future without a grave risk of the whole situation boiling up again.

Though the Americans must establish a firm political as well as military base, they should confine themselves to defending those areas of South Vietnam which are defensible. Within these territories they should demonstrate that non-Communist' government can guarantee order, liberty and prosperity. At the same time they should stop the bombing and conduct a peace offensive, calling upon Russia and the North Vietnamese to come to a conference, and making it clear that with proper guarantees they will accept the non-alignment of Vietnam. U Thant may have a most important part to play in this conference and in any subsequent settle- ment. But it is unlikely that the United Nations can achieve anything until American policy is altered.

The situation in Vietnam is a matter for the Americans: despite Britain's position as a co- chairman of the 1954 Geneva settlement, we should not delude ourselves that we can do much. The American policy of attempting to help other countries while steering clear of any involvement which might smack of colonialism springs from the best of motives. But it is one of great difficulty. All too often it leads to identification with regimes which are both incompetent and corrupt. The Viet- namese experience might usefully result in some joint consultation on western policy towards emergent countries. But at all costs the West must avoid behaving as though all nationalist movements were necessarily Communist and necessarily hostile.