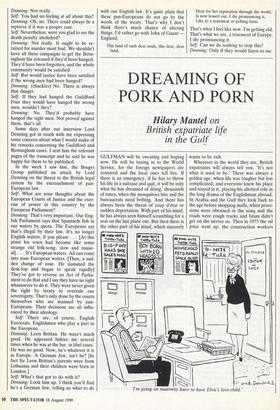 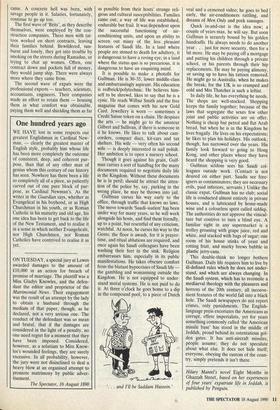 Hilary Mantel on British expatriate life in the Gulf

GULFMAN will be sweating and hoping now. He will be tuning in to the World Service, for the foreign newspapers are censored and the local ones tell lies. If there is an emergency, if he has to throw his life in a suitcase and quit, it will be only what he has dreamed of doing, thousands of times, when the mosquitoes bite and the bureaucrats need bribing. And there has always been the threat of coup d'etat or sudden deportation. With part of his mind, he has always seen himself scrambling for a seat on the last plane out. But then there is the other part of his mind, which sincerely wants to be rich.

Wherever in the world they are, British expatriates will always tell you, 'It's not what it used to be.' There was always a golden age, when life was tougher but less complicated, and everyone knew his place and stayed in it, playing his allotted role in the long drama of the Englishman abroad. In Arabia and the Gulf they look back to the age before shopping malls, when provi- sions were obtained in the souq and the roads were rough tracks and Islam didn't get on the nerves so. Then in 1973 the oil price went up, the construction workers came. A concrete hell was born, with savage people in it. Salaries, fortunately, continue to go up too. The first wave of 'Brits', as they describe themselves, were employed by the con- struction companies. These men with tat- toos worked on short contracts, leaving their families behind. Bewildered, sun- burnt and lonely, they got into trouble by smoking on the streets during Ramadan, or trying to chat up women. Often, one contract down and pockets full of money, they would jump ship. There were always more where they came from.

The second wave of expats were the professional experts — teachers, scientists, accountants, engineers. Their companies made an effort to retain them — housing them in what comfort was obtainable, paying them well and shielding them as far as possible from their hosts! strange reli- gious and cultural susceptibilities. Families came out; a way of life was established, endurable but frail. It was dependent upon the successful functioning of air- conditioning units, and upon an ability to screen out many of the less pleasant features of Saudi life. In a land where people are stoned to death for adultery, it is dangerous to have a roving eye; in a land where the status quo is so precarious, it is dangerous to have an enquiring mind.

It is possible to make a photofit for Gulfman. He is 30-35, lower middle-class and embarrassingly aspirant. His education is redbrick/polytechnic. He believes him- self to be shrewd, likes to say that he is a cynic. He reads Wilbur Smith and the free magazine that comes with his new Gold Card. Jewellery is worn — sometimes a Credit Suisse token on a chain. He despises the arts — he might go to the amateur Gilbert and Sullivan, if there is someone in it he knows. He likes to talk about cam- corders, compact discs, kit-cars and tax shelters. His wife — very often his second wife — is deeply interested in nail polish. Her ambition is to open a nursery school.

Though it goes against his grain, Gulf- man carries a sort of handbag for the many documents required to negotiate daily life in the Kingdom. Without these documents he is in peril; should he attract the atten- tion of the police by, say, parking in the wrong place, he may be thrown into jail. Gulfman curses his way early to the office, through traffic that knows no laws. The move towards 'Saudi–isation' ha,s been under way for many years, so he will work alongside his hosts, and find them friendly, up to a point, but resentful of any criticism, watchful. At noon, he curses his Way to the Gents; the floor is awash, for it is prayer- time, and ritual ablutions are required, and once again his Saudi colleagues have been washing their feet in the sink. Religion embarrasses him, especially in its public manifestations. He takes obscure comfort from the blatant hypocrisies of Saudi life — the gambling and womanising outside the Kingdom. He is not equipped to under- stand moral systems. He is not paid to do it. At three o'clock he goes home to a dip in the compound pool, to a piece of Dutch . . and ill be Saddam Hussein.' veal and a censored video; he goes to bed early, the air-conditioners rattling, and dreams of Men Only and pork sausages.

Quick in-and-out is the idea now; a couple of years max, he will say. But soon Gulfman is securely bound by his golden handcuffs. He always needs to do another year . . . just for more security, then for a bit more. He may be paying off a mortgage and putting his children through a private school, or his parents through their hip replacements. He may be paying alimony, or saving up to have his tattoos removed. He might go to Australia, when he makes the break; for the UK is so cramped and cold and Mrs Thatcher is such a leftist.

In daily life, he has everything he needs. The shops are well-stocked. Shopping keeps the family together; because of the laws that segregate the sexes few other joint and public activities are on offer. Nothing is cheap but petrol and flat Arab bread, but when he is in the Kingdom he lives frugally. He lives on his expectations; he likes to plan his holidays. His outlook, though, has narrowed over the years. His family look forward to going. to Hong Kong, and other places where they have heard the shopping is very good.

Gulfman seldom sees his Saudi col- leagues outside work. (Contact is not desired on either part. Saudis see fore- igners as contaminators; they are necessary evils, paid inferiors, servants.) Unlike the classic expat, Gulfman has no club; social life is conducted almost entirely in private houses, and is lubricated by home-made wine and a colourless spirit called siddiqi. The authorities do not approve the vinicul- ture but contrive to turn a blind eye. A familiar sight in any supermarket is a trolley groaning with grape juice, red and white, and stacked with bags of sugar; one room of his house stinks of yeast and rotting fruit, and murky brews bubble in plastic jerry-cans. * This double-think no longer bothers Gulfman. Daily life requires him to live by ill-defined rules which he does not under- stand, and which are always changing. In the Saudi system, which has to reconcile a mediaeval theology with the pleasures and horrors of the 20th century, all inconve- nient features of the world fall into a black hole. The Saudi newspapers do not report crimes, only punishments. The English- language press excoriates the Americans as corrupt, effete imperialists, yet for years something commonly called 'the American missile base' has stood in the middle of Jeddah, proud behind its ostentatious gol- den gates. It has anti-aircraft missiles, people assume; they do not speculate about what else. It does not hide itself; everyone, obeying the custom of the coun- try, simply pretends it isn't there.

Hilary Mantel's novel Eight Months in Ghazzah Street, based on her experiences of four years' expatriate life in Jeddah, is published by Penguin.