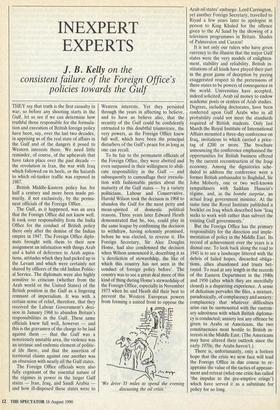 consistent failure of the Foreign Office's policies towards the Gulf

THEY say that truth is the first casualty in war; so before any shooting starts in the Gulf, let us see if we can determine how truthful those responsible for the formula- tion and execution of British foreign policy have been, say, over the last two decades, in apprising us of the real state of affairs in the Gulf and of the dangers it posed to Western interests there. We need little reminder, of course, of the upheavals that have taken place over the past decade — the revolution in Iran, the war with Iraq which followed on its heels, or the hazards to which oil-tanker traffic was exposed in 1987.

British Middle-Eastern policy has for half a century and more been Made pri- marily, if not exclusively, by the perma- nent officials of the Foreign Office.

The Gulf, as it happened, was an area that the Foreign Office did not know well. It took over responsibility from the India Office for the conduct of British policy there only after the demise of the Indian empire in 1947. The Foreign Office diplo- mats brought with them to their new assignment an infatuation with things Arab and a habit of deference to Arab aspira- tions, attitudes which they had picked up in the Levant and which were certainly not shared by officers of the old Indian Politic- al Service. The diplomats were also highly sensitive to criticism (whether from the Arab world or the United States) of the British position in the Gulf as a lingering remnant of imperialism. It was with a certain sense of relief, therefore, that they received the Labour Government's deci- sion in January 1968 to abandon Britain's responsibilities in the Gulf. These same officials knew full well, however — and this is the gravamen of the charge to be laid against them — that the Gulf was a notoriously unstable area, the violence was an intrinsic and endemic element of politic- al life there, and that the assertion of territorial claims against one another was an obsession with nearly all the Gulf states.

The Foreign Office officials were also fully cognisant of the essential nature of the regimes in power in the larger Gulf states — Iran, Iraq, and Saudi Arabia — and how ill-disposed these states were to Western interests. Yet they persisted through the years in affecting to believe, and to have us believe also, that the security of the Gulf could be confidently entrusted to this doubtful triumvirate, the very powers, as the Foreign Office knew full well, which have been the principal disturbers of the Gulf's peace for as long as one can recall.

To be fair to the permanent officials of the Foreign Office, they were abetted and even Surpassed in their willingness to abdi- cate responsibility in the Gulf — and subsequently to camouflage their irresolu- tion with fashionable pieties about the maturity of the Gulf states — by a variety politicians, Labour and Conservative. Harold Wilson took the decision in 1968 to abandon the Gulf for the most petty and mean-spirited of domestic political reasons. Three years later Edward Heath demonstrated that he, too, could play in the same league by confirming the decision to withdraw, having solemnly promised, before he was elected, to reverse it. His Foreign Secretary, Sir Alec Douglas Home, had also condemned the decision when Wilson announced it, describing it as 'a dereliction of stewardship, the like of which this country has not seen in the conduct of foreign policy before'. The country was to see a great deal more of this kind of thing during Home's stewardship of the Foreign Office, especially in November 1973 when he and Heath did their best to prevent the Western European powers from forming a united front to oppose the 'We drive 35 miles to spend the evening discussing the oil crisis.'

Arab oil states' embargo. Lord Carrington, yet another Foreign Secretary, travelled to Riyad a few years later to apologise in person to King Khaled for the offence given to the Al Saud by the showing of a television programmes in Britain. Shades of Palmerston and Curzon!

It is not only our rulers who have given currency to the illusion that the major Gillf states were the very models of enlighten- ment, stability and reliability. British in- stitutions of all kinds have played their part in the great game of deception by paying exaggerated respect to the pretensions of these states to be powers of consequence in the world. Universities have accepted, indeed solicited, Arab oil money to endow academic posts or centres of Arab studies. Degrees, including doctorates, have been conferred upon Gulf Arabs who in all probability could not meet the standards required of British students. Only last March the Royal Institute of International Affairs mounted a three-day conference on Iraq, invitations to which carried a price- tag of £200 or more. The brochure announcing the conference emphasised the opportunities for British business offered by the current reconstruction of the Iraqi economy. Among the dignatories sche- duled to address the conference were a former British ambassador to Baghdad, Sir John Moberly, one or two well-known sympathisers with Saddam Hussein's regime, and, as the bombe surprise, an actual Iraqi government minister. At the same time the Royal Institute published a booklet on Iraq which described how 'Iraq seeks to work with rather than subvert the existing Gulf governments.'

But the Foreign Office has the primary responsibility for the direction and imple- mentation of policy in the Middle East. Its record of achievement over the years is a dismal one. To look back along the road to 1945 is to see a landscape littered with the debris of failed hopes, discarded obliga- tions, allies abandoned and trusts bet- rayed. To read at any length in the records of the Eastern Department in the 1940s and 1950 (after which they are mercifully closed) is a dispiriting experience. A sense of defeatism pervades the files, a mixture, paradoxically, of complacency and anxiety: complacency that whatever difficulties arise can be surmounted with the custom- ary adroitness with which British diploma- cy is conducted; anxiety lest any offence be

given to Arabs or Americans, the two constituencies most hostile to British in- terests in the Middle East. (The Americans may have altered their outlook since the early 1970s; the Arabs haven't.) There is, unfortunately, only a forlorn hope that the crisis we now face will lead the Foreign Office in due course to re- appraise the value of the tactics of appease- ment and retreat (what one critic has called 'the impulse to the pre-emptive cringe') which have served it as a substitute for policy for so long.