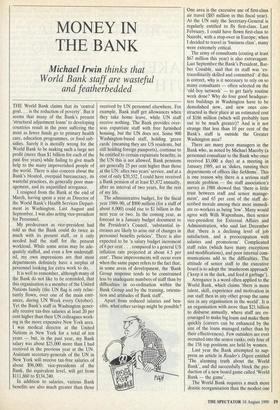 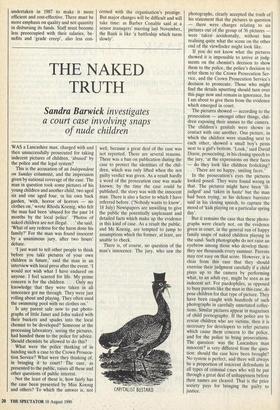 MONEY IN THE BANK

THE World Bank claims that its 'central goal. . . is the reduction of poverty'. But it seems that many of the Bank's present 'structural adjustment loans' to developing countries result in the poor suffering the most as fewer funds go to primary health care, education programmes, or food sub- sidies. Surely it is morally wrong for the World Bank to be making such a large net profit (more than $1 billion for each of the past five years) while failing to give much help to the many impoverished people of the world. There is also concern about the Bank's bloated, overpaid bureaucracy, its wasteful practices, its generally poor man- agement, and its unjustified arrogance.

I resigned from the Bank at the end of March, having spent a year as Director of the World Bank's Health Services Depart- ment in Washington. Last August and September, I was also acting vice-president for Personnel.

My predecessor as vice-president had told us that the Bank could do twice as much with its present staff, or it only needed half the staff for the present workload. While some areas may be ade- quately staffed, and even a few understaff- ed, my own impressions are that most departments definitely have a surplus of personnel looking for extra work to do.

It is well to remember, although many of the Bank do not like to be reminded, that this organisation is a member of the United Nations family (the UN flag is only reluc- tantly flown, over one of the main entr- ances, during UN Week every October). Yet the Bank's staff in Washington gener- ally receive tax-free salaries at least 20 per cent higher than their UN colleagues work- ing in the more expensive New York area. I was medical director at the United Nations in New York for a total of ten years — but, in the past year, my Bank salary was about $25,000 more than I had received in the previous year at the UN. Assistant secretary-generals of the UN in New York will receive tax-free salaries of about $96,000; vice-presidents of the Bank, the equivalent level, will get from $111,860 to $134,240.

In addition to salaries, various Bank benefits are also much greater than those received by UN personnel elsewhere. For example, Bank staff get allowances when they take home leave, while UN staff receive nothing. The Bank provides over- seas expatriate staff with free furnished housing, but the UN does not. Some 900 Washington-based staff, holding 'green cards' (meaning they are US residents, but still holding foreign passports), continue to be entitled to certain expatriate benefits; in the UN this is not allowed. Bank pensions are generally 25 per cent higher than those at the UN: after two years' service, and at a cost of only $20,552, I could have received a Bank pension of at least $5,872 annually, after an interval of two years, for the rest of my life.

The administrative budget, for the fiscal year 1989-90, of $900 million (for a staff of about 8,000) could rise to $1 billion in the next year or two. In the coming year, as forecast in a January budget document to the President's Council, 'substantial in- creases are likely to arise out of changes in personnel benefits policies'. There is also expected to be 'a salary budget increment of 6 percent. . . compared to a general US inflation rate projected at about 4.5 per cent'. These improvements will occur even when the same paper refers to the fact that, in some areas of development, the 'Bank Group response tends to be constrained less by inadequate numbers of staff than by difficulties in co-ordination within the Bank Group and by the training, orienta- tion and attitudes of Bank staff'.

Apart from reduced salaries and ben- efits, what other savings might be possible? One area is the excessive use of first-class air travel ($85 million in this fiscal year). At the UN only the Secretary-General is regularly entitled to fly first-class. Last February, I could have flown first-class to Nairobi, with a stop-over in Europe; when I decided to travel in 'business class', many were extremely critical.

The army of consultants (costing at least $67 million this year) is also extravagant. Last September the Bank's President, Bar- ber Conable, said that its staff was 'ex- traordinarily skilled and committed': if this is correct, why is it necessary to rely on so many consultants — often selected on the 'old boy network' — to get fairly routine work done? Why do four good headquar- ters buildings in Washington have to be demolished now, and new ones con- structed in their place at an estimated cost of $186 million (which will probably turn out to be much greater)? And is it not strange that less than 10 per cent of the Bank's staff is outside the Greater Washington area?

There are many poor managers in the Bank who, as noted by Michael Macoby (a personnel consultant to the Bank who once received $3,000 a day) at a meeting in January 1989, act as 'dukes, running their departments of offices like fiefdoms'. This is one reason why there is a serious staff morale problem — the staff association's survey in 1988 showed that 'there is little trust between staff and senior manage- ment', and 65 per cent of the staff de- scribed morale among their most immedi- ate co-workers as being 'low'. Many would agree with Willi Wapenhans, then senior vice-president for External Affairs and Administration, who said last December that 'there is a declining level of job satisfaction, and a preoccupation with salaries and promotions'. Complicated staff rules (which have many exceptions and modifications), and poor internal com- munications add to the difficulties. The attitude of senior staff to the executive board is to adopt the 'mushroom approach' ('keep it in the dark, and feed it garbage').

Arrogance is a word often applied to the World Bank, which claims 'there is more talent, skill, experience and motivation in our staff then in any other group the same size in any organisation in the world'. It is an organisation with more than $21 billion to disburse annually, where staff are en- couraged to make big loans and make them quickly (careers can be enhanced by the size of the loans managed rather than by their effectiveness). Few outsiders are ever recruited into the senior ranks; only four of the 158 top positions are held by women.

Last year the Bank attempted to sup- press an article in Reader's Digest entitled 'The alarming truth about the World Bank', and did successfully block the pro- duction of a new board game called 'World Bank — the game'.

The World Bank requires a much more drastic reorganisation than the modest One undertaken in 1987 to make it more efficient and cost-effective. There must be more emphasis on quality and not quantity in disbursing its funds. Staff must become less preoccupied with their salaries, be- nefits and 'grade creep', also less con- cerned with the organisation's prestige. But major changes will be difficult and will take time: as Barber Conable said at a senior managers' meeting last November, the Bank is like 'a battleship which turns slowly'.