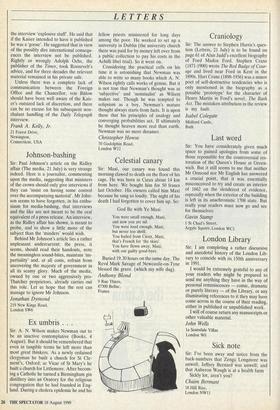 Sir: Paul Johnson's article on the Ridley affair (The media, 21 July) is very strange indeed. Here is a journalist, commenting upon the media, suggesting that ministers of the crown should only give interviews if they can 'insist on having some control over the accompanying material'. Mr John- son seems to have forgotten, in his enthu- siasm for media-bashing, that interviews and the like are not meant to be the oral equivalent of a press release. An interview, as the Ridley affair has shown, is meant to probe, and to show a little more of the subject than the 'minders' would wish.

Behind Mr Johnson's article lies a rather unpleasant undercurrent: the press, it seems, should read their handouts, note the meaningless sound-bites, maintain 'im- partiality' and, at all costs, refrain from uncovering the majesty of government in all its seamy glory. Much of the media, owned by one or two aggressively pro- Thatcher proprietors, already carries out this role. Let us hope that the rest can manage to ignore Mr Johnson.