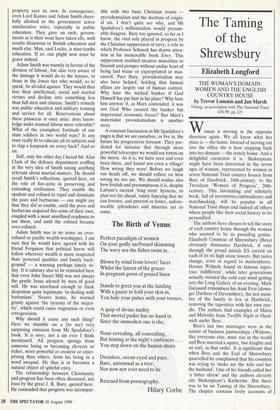 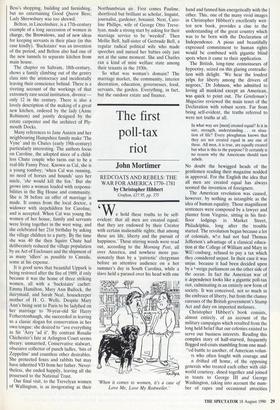 The Taming of the Shrewsbury

THE WOMAN'S DOMAIN: WOMEN AND THE ENGLISH COUNTRY HOUSE by Trevor Lummis and Jan Marsh

Woman is moving in the opposite direction again. We all know what her place is— the home. Instead of moving out into the office she is here stepping back into her domain — the stately home. And a delightful excursion it is. Shakespeare might have been interested in the seven ages of woman, represented by women in seven National Trust country houses from Bess of Hardwick, 16th-century, to the Trevelyan 'Women of Progress', 20th- century. This fascinating and scholarly book, full of inventories,embroideries and matchmaking, will be popular in all National Trust shops and indeed all others where people like their social history to be personified.

The authors have chosen to tell the story of each country house through the woman who seemed to be its presiding genius. Elizabeth Countess of Shrewsbury (Bess) obviously dominates Hardwick, if only through the proud initials ES carved on each of its six high stone towers. But tastes change, even in regard to masterpieces. Horace Walpole found its famous tapes- tries 'indifferent', while later generations actually minded the cold east wind getting into the Long Gallery of an evening. Mark Girouard remembers his Aunt Evie (dowa- ger Duchess of Devonshire), the last mem- ber of the family to live at Hardwick, restoring the tapestries with her own nee- dle. The authors find examples of Maria and Malvolio from Twelfth Night at Hard- wick under Bess.

Bess's last two marriages were in the nature of business partnerships. (Widows, like everyone else, must rise in the world and Bess married a squire, two knights and an earl, in that order. It is significant that when Bess and the Earl of Shrewsbury quarrelled he complained that his countess was trying to 'make me the wife and her the husband'. One of his friends called her 'a bitter shrew' and the authors cleverly cite Shakespeare's Katherine. But there was to be no Taming of the Shrewsbury. The chapter contains lively accounts of

Bess's shopping, building and furnishing, but no entertaining Good Queen Bess; Lady Shrewsbury was too shrewd.

Belton, in Lincolnshire, is a 17th-century example of a long succession of women in charge, the Brownlows, and of new ideas for keeping servants in their place (in this case kindly). 'Backstairs' was an invention of the period, and Belton also had one of the new tunnels to separate kitchen from main house.

The chapter on Saltram, 18th-century, shows a family climbing out of the gentry class into the aristocracy and incidentally leaving their conscience behind. There is a riveting account of the workings of that extremely rare social institution, divorce — only 12 in the century. There is also a lovely description of the making of a great new kitchen, ordered by the lady (Anne Robinson) and jointly designed by the estate carpenter and the architect of Ply- mouth Docks.

Many references to Jane Austen and her neighbouring Hampshire family make 'The Vyne' and its Chutes (early 19th-century) particularly interesting. The authors focus on Caroline, the adopted niece of a child- less Chute couple who turns out to be a real-life Fanny Price. Known as Cal, she is a young tomboy; 'when Cal was running, no need of horses and hounds' says her uncle, 'she would kill the fox.' But she grows into a woman loaded with responsi- bilities in the Big House and community. She is 38 before an offer of marriage is made. It comes from the local doctor, a widower with stepchildren for Caroline, and is accepted. When Cal was young the women of her house, family and servants were living together in the west wing, and she celebrated her 21st birthday by asking the village children to a party. By the time she was 40 the then Squire Chute had deliberately reduced the village population by an Act of Enclosure and the shipment of as many 'idlers' as possible to Canada, some at his expense.

It is good news that beautiful Uppark is being restored after the fire of 1989, if only because it was the home of three striking women, all with a 'backstairs' cachet: Emma Hamilton, Mary Ann Bullock, the dairymaid, and Sarah Neal, housekeeper mother of H. G. Wells. Despite Mary Ann's being sent to Paris to be ladyfied on her marriage to 70-year-old Sir Harry Fetherstonhaugh, she succeeded in leaving us a classic slogan for conservation in her own tongue: she desired to "ave everything as Sir 'Arry 'ad it'. By contrast Rosalie Chichester's fate at Arlington Court seems dreary: unmarried, Conservative stalwart, obsessive collector of punch ladles, 'bits of Zeppelins' and countless other desirables. She protected foxes and rabbits but may have inherited VD from her father. Never- theless, she ended happily, leaving all she possessed to the National Trust.

Our final visit, to the Trevelyan women of Wallington, is as invigorating as their Northumbrian air. First comes Pauline, shortlived but brilliant as scholar, linguist, journalist, gardener, botanist. Next, Caro- line Phillips, wife of George Otto Treve- lyan, made a strong start by asking for their marriage service to be 'weeded'. Then Mollie Bell, half-sister of Gertrude Bell, a regular radical political wife who made speeches and nursed her babies only just not at the same moment. She and Charles ran a kind of mini welfare state among their tenants in the 1930s.

So what was woman's domain? The marriage market, the community, interior decoration, education, governesses, food, servants, the garden. Everything, in fact, but the outdoor estate and finance.