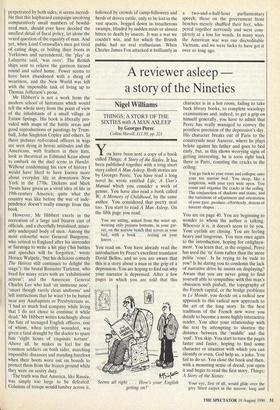 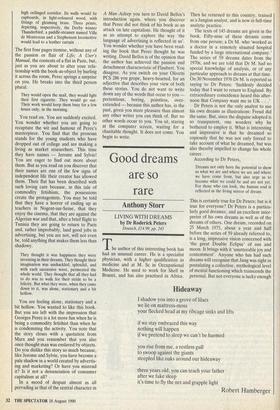 A reviewer asleep a story of the Nineties

THINGS; A STORY OF THE SIXTIES with A MAN ASLEEP by Georges Perec Collins Harvill, £12.50, pp. 221 You have been sent a copy of a book called Things; A Story of the Sixties. It has been published together with a long short story called A Man Asleep. Both stories are by Georges Perec. You have read a long novel he wrote entitled Life; A User's Manua/ which you consider a work of genius. You have also read a book called W; A Memory of Childhood, by the same author. You considered that pretty neat too. You start to read A Man Asleep. On the fifth page you read:

You are sitting, naked from the waist up, wearing only pyjama bottoms, in your gar- ret, on the narrow bench that serves as your bed, with a book . . . . resting on your knees. . .

You read on. You have already read the introduction by Perec's excellent translator David Bellos, and so you are aware that this is a story about a man in the grip of a depression. You are hoping to find out why your narrator is depressed. After a few pages in which you are told that this

character is in a hot room, failing to take back library books, to complete sociology examinations and, indeed, to get a grip on himself generally, you have to admit that Perec has really managed to convey the pointless precision of the depressive's day. His character breaks out of Paris to the countryside near Auxerre, where he plays belote against his father and goes to bed early, but, as this shows worrying signs of getting interesting, he is soon right back there in Paris, counting the cracks in the ceiling:

You go back to your room and collapse onto your too narrow bed. You sleep, like a simpleton, with your eyes wide open. You count and organise the cracks in the ceiling. The conjunction of shadows and stains, and the variations of adjustment and orientation of your gaze, produce, effortlessly, dozens of nascent shapes . . .

You are on page 40. You are beginning to wonder to whom the author is talking. Whoever it is, it doesn't seem to be you. Your eyelids are closing. You are feeling heavy and langorous. You turn once again to the introduction, hoping for enlighten- ment. You learn that, in the original, Perec has used the 'tu' form rather than the more polite 'vous'. Is he trying to be rude to you? Is he daring you to condemn the lack of narrative drive he insists on displaying? Aware that you are never going to find yourself able to sympathise with this man's obsession with pinball, the topography of the French capital, or the bridge problems in Le Monde, you decide on a radical new approach to this radical new approach to the art of the long story. In the best traditions of the French new wave you decide to become a more highly interactive reader. You alter your relationship with the text by attempting to shorten the distance between the 'middle' and the 'end'. You skip. You start to turn the pages faster and faster, hoping to find some character or situation with which you can identify or even, God help us, a joke. You fail to do so. You close the book and then, with a mounting sense of dread, you open it and begin to read the first story, Things; A Story of the Sixties.

Your eye, first of all, would glide over the grey fitted carpet in the narrow, long and high ceilinged corridor. Its walls would be cupboards, in light-coloured wood, with fittings of gleaming brass. Three prints, depicting, respectively, the Derby winner Thunderbird, a paddle-steamer named Ville de Montereau and a Stephenson locomotive would lead to a leather curtain . . .

The first four pages itemise, without any of the passion or flair of Life; A User's Manual, the contents of a flat in Paris, but, just as you are about to alter your rela- tionship with the book-as-object by hurling it across the room, Perec springs a surprise on you. He breaks into the third person plural: '

They would open the mail, they would light their first cigarette. They would go out. Their work would keep them busy for a few hours only, in the morning.

You read on. You are suddenly excited. You wonder whether you are going to recapture the wit and humour of Perec's masterpiece. You find that the pronoun stands for the young students who have dropped out of college and are making a living as market researchers. This time they have names — Jerome and Sylvie! You are eager to find out more about them. But as you read on you discover that their names are one of the few signs of independent life their creator has allowed them. Their flat has been described with such loving care because, in this tale of commodity fetishism, the possessions create the protagonists. You may be told that they have a horror of ending up as teachers in Nogent-sur-Seine, that they enjoy the cinema, that they are against the Algerian war and that, after a brief flight to Tunisia they are going to return to Paris and, rather improbably, land good jobs in advertising, but you are not, will not even be, told anything that makes them less than shadowy.

They thought it was happiness they were inventing in their dreams. They thought their imagination was unshackled, splendid, and with each successive wave, permeated the whole world. They thought that all they had to do was to walk for their stride to be a felicity. But what they were, when they came down to it, was alone, stationary and a bit hollow.

You are feeling alone, stationary and a bit hollow. You wanted to like this book. But you are left with the impression that Georges Perec is a lot more fun when he is being a commodity fetishist than when he is condemning the activity. You note that the story closes with a quotation from Marx and you remember that you also once thought man was enslaved by objects. Do you dislike this story so much because, like Jerome and Sylvie, you have become a pale shadow in a world created by advertis- ing and marketing? Or have you misread it? Is it not a denunciation of consumer capitalism at all?

A Man Asleep you turn to David Bellos's introduction again, where you discover that Perec did not think of his book as an attack on late capitalism. He thought of it as an attempt to explore the way 'the language of advertising is reflected in us'. You wonder whether you have been read- ing the book that Perec thought he was writing. David Bellos is of the opinion that the author has achieved the passion and detachment characteristic of Flaubert. You disagree. As you switch on your Olivetti PCS 286 you grope, heavy-hearted, for an adjective that describes your view of both these stories. You do not want to write down any of the words that occur to you — pretentious, boring, pointless, over- extended — because this author has, in the past, given you more pleasure than almost any other writer you can think of. But no other words occur to you. You sit, staring at the computer screen, waiting for a charitable thought. It does not come. You begin to write.