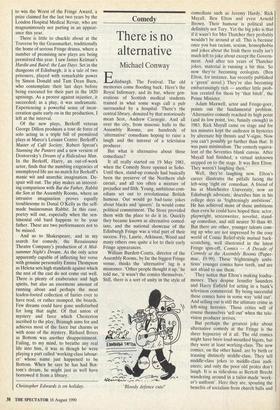 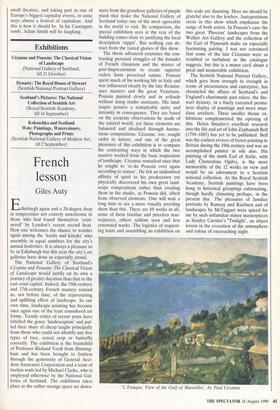 There is no alternative

Edinburgh. The Festival. The old memories come flooding back. Here's the Royal Infirmary, and its bar, where gen- erations of Scottish medical students trained in what some wags call a pub surrounded by a hospital. There's the central library, donated by that notoriously mean Scot, Andrew Carnegie. And all over the city, from masonic halls to the Assembly Rooms, are hundreds of 'alternative' comedians hoping to raise a laugh and the interest of a television producer.

But what is alternative about these comedians?

It all really started on 19 May 1981, when the Comedy Store opened in Soho. Until then, stand-up comedy had basically been the preserve of the Northern club circuit, and all too often a mixture of prejudice and filth. Young, ambitious com- edians set out to revolutionise British humour. Out would go bad-taste jokes about blacks and 'queers'. In would come political commitment. The Store provided them with the place to do it in. Quickly they became known as alternative comed- ians, and the national showcase of the Edinburgh Fringe was a vital part of their success. Fry, Laurie, Atkinson, Wood and many others owe quite a lot to their early Fringe appearances.

William Burdett-Coutts, director of the Assembly Rooms, by far the biggest Fringe venue, thinks the 'alternative' tag is a misnomer. 'Other people thought it up,' he told me, 'it wasn't the comics themselves.' Still, there is a sort of unity in the style of 'Bloody defence cuts!' comedians such as Jeremy Hardy, Rick Mayall, Ben Elton and even Arnold Brown. Their humour is political and definitely not Tory. Yet the big joke is that if it wasn't for Mrs Thatcher they probably wouldn't be around at all. This is because once you ban racism, sexism, homophobia and jokes about the Irish there really isn't much left to joke about except the Govern- ment. And after ten years of Thatcher jokes, material is running a bit thin. So now they're becoming ecologists. (Ben Elton, for instance, has recently published a 'green' novel.) They're also becoming embarrassingly rich — another little prob- lem created for them by 'that bitch', the Prime Minister.

Adam Maxwell, actor and Fringe-goer, points out the fundamental problem. 'Alternative comedy reached its high point (and its low point, too, funnily enough) in 1983. Rick Mayall came on stage and for ten minutes kept the audience in hysterics by alternate hip thrusts and V-signs. Now you can't possibly go further than that. It was pure minimalism. The comedy equiva- lent of the Seventies blank canvas. After Maya!l had finished, a virtual unknown stepped on to the stage. It was Ben Elton. They weren't laughing then.'

Well, they're laughing now. Elton's career illustrates the pitfalls facing the left-wing 'right on' comedian. A friend of his at Manchester University, now an Edinburgh advocate, describes him in his college days as 'frighteningly ambitious'. He has achieved more of these ambitions than even he could have hoped then: actor, playwright, screenwriter, novelist, stand- up comedian, and still nearer 30 than 40. But there are other, younger talents com- ing up who are not impressed by the cosy world of Comic Relief-style mutual back- scratching, well illustrated in the latest Fringe spin-off, Comics — A Decade of Comedy at the Assembly Rooms (Paper- mac, £9.99). These 'frighteningly ambi- tious' younger comics have teeth, and are not afraid to use them.

They notice that Elton's making loadsa- money. They despise Jennifer Saunders and Harry Enfield for acting in a bank's television commercial. By being successful these comics have in some way 'sold out'. And selling out is still the ultimate crime in left-wing heresies. These critics will of course themselves 'sell out' when the tele- vision producer arrives.

But perhaps the greatest joke about alternative comedy at the Fringe is the sheer hypocrisy of it all. The old comics might have been loud-mouthed bigots, but they were at least working-class. The new comics, on the other hand, are by birth or training distinctly middle-class. They tell middle-class jokes to middle-class audi- ences; and only the poor old proles don't laugh. It is as ridiculous as Bertolt Brecht wandering around in a tailor-made 'work- er's uniform'. Here they are, spouting the benefits of socialism from church halls and small theatres, and taking part in one of Europe's biggest capitalist events, in some ways almost a festival of capitalism. And this is how it should be. In his Canongate tomb, Adam Smith will be laughing.