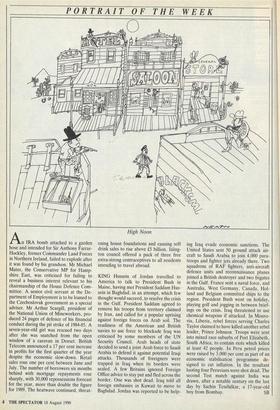 High Noon An IRA bomb attached to a garden hose and intended for Sir Anthony Farrar- Hockley, former Commander Land Forces in Northern Ireland, failed to explode after it was found by his grandson. Mr Michael Mates, the Conservative MP for Hamp- shire East, was criticised for failing to reveal a business interest relevant to his chairmanship of the House Defence Com- mittee. A senior civil servant at the De- partment of Employment is to be loaned to the Czechoslovak government as a special adviser. Mr Arthur Scargill, president of the National Union of Mineworkers, pro- duced 24 pages of defence of his financial conduct during the pit strike of 1984-85. A seven-year-old girl was rescued two days after she was snatched from the open window of a caravan in Dorset. British Telecom announced a 17 per cent increase in profits for the first quarter of the year despite the economic slow-down. Retail sales rose one per cent between June and July. The number of borrowers six months behind with mortgage repayments rose sharply, with 30,000 repossessions forecast for the year, more than double the figure for 1989. The heatwave continued, threat-

KING Hussein of Jordan travelled to America to talk to President Bush in Maine, having met President Saddam Hus- sein in Baghdad, in an attempt, which few thought would succeed, to resolve the crisis in the Gulf. President Saddam agreed to remove his troops from territory claimed by Iran, and called for a popular uprising against foreign forces on Arab soil. The readiness of the American and British navies to use force to blockade Iraq was criticised by some members of the UN Security Council. Arab heads of state decided to send a joint Arab force to Saudi Arabia to defend it against potential Iraqi attacks. Thousands of foreigners were trapped in Iraq when its borders were sealed. A few Britains ignored Foreign Office advice to stay put and fled across the border. One was shot dead. Iraq told all foreign embassies in Kuwait to move to Baghdad. Jordan was reported to be help- ing Iraq evade economic sanctions. The United States sent 50 ground attack air- craft to Saudi Arabia to join 4,000 para- troops and fighter jets already there. Two squadrons of RAF fighters, anti-aircraft defence units and reconnaissance planes joined a British destroyer and two frigates in the Gulf. France sent a naval force, and Australia, West Germany, Canada, Hol- land and Belgium committed ships to the region. President Bush went on holiday, playing golf and jogging in between brief- ings on the crisis. Iraq threatened to use chemical weapons if attacked. In Monro- via, Liberia, rebel forces serving Charles Taylor claimed to have killed another rebel leader, Prince Johnson. Troops were sent into mixed race suburbs of Port Elizabeth, South Africa, to contain riots which killed at least 42 people. In Peru petrol prices were raised by 3,000 per cent as part of an economic stabilisation programme de- signed to cut inflation. In the resultant looting four Peruvians were shot dead. The second Test match against India was drawn, after a notable century on the last day by Sachin Tendulkar, a 17-year-old