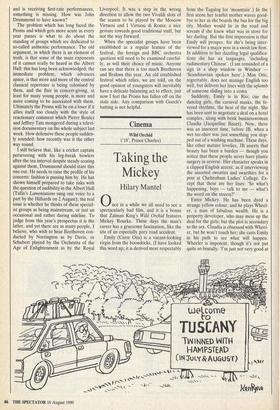 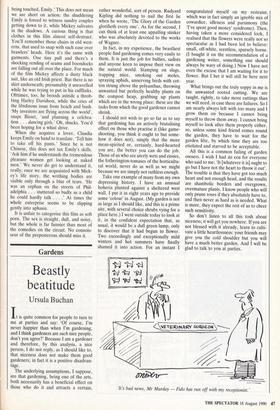 nce in a while we all need to see a spectacularly bad film, and it is a bonus that Zalman King's Wild Orchid features Mickey Rourke. These days the man's , career has a gruesome fascination, like the site of an especially gory road accident.

Emily (Carre Otis) is a vacant-looking virgin from the boondocks. (I have looked this word up; it is derived most respectably

from the Tagalog for 'mountain') In the first scene her tearful mother waves good- bye to her as she boards the bus for the big city. Mother would lie in the road and scream if she knew what was in store for her darling. But the first impression is that Emily will prosper, for she's being inter- viewed for a major post in a swish law firm. In addition to her dazzling legal qualifica- tions she has six languages, 'including rudimentary Chinese'. (I am reminded of a sign in a shop window in Windsor — 'Scandinavian spoken here'.) Miss Otis, regrettably, does not manage English too well, but delivers her lines with the aplomb of someone sliding into a coma.

Suddenly, Emily is in Rio; cue the dancing girls, the carnival masks, the fe- vered rhythms, the heat of the night. She has been sent to negotiate a deal on a hotel complex, along with brisk businesswoman Claudia (Jacqueline Bisset). Now, there was an innocent time, before JB, when a wet tee-shirt was just something you slop- ped out of a washing machine. These days, like other mature lovelies, JB asserts that beauty has been a burden — though you notice that these people never have plastic surgery in reverse. Her character speaks in a clipped English accent, as if interviewing the assorted sweaties and swarthies for a post at Cheltenham Ladies' College. Ex- cept that these are her lines: `So what's happening, boys — talk to me — what's the word on the streets?'

Enter Mickey. He has been dyed a strange yellow colour, and he plays Wheel- er, a man of fabulous wealth. He is a property developer, who may mess up the deal for the girls; but the plot is secondary to the sex. Claudia is obsessed with Wheel- er, but he won't touch her; she casts Emily in his path to see what will happen. Wheeler is impotent, though it's not put quite so brutally: 'I'm just not very good at being touched, Emily.' This does not mean we are short on action: the shuddering Emily is forced to witness sundry couples getting down to it, while Mickey salivates in the shadows. A curious thing is that clothes in this film almost self-destruct. You'll remember those chairs in old west- erns, that used to snap with such ease over brawlers' heads. Here it's the same with garments. One tiny pull and there's a shocking rending of seams and boondocks are falling out all over the place. For much of the film Mickey affects a dusty black suit, like an old Irish priest. But there is no shirt underneath; presumably it unravelled while he was trying to put in his cufflinks. Ofttimes, too, he broods astride a throb- bing Harley Davidson, while the cries of the libidinous issue from beach and bush. 'My investors are flying across the world', snaps Bisset, 'and planning a celebra- tion. . . dancing girls.' Oh, shucks. You'd been hoping for a whist drive.

When she acquires a lover, Claudia keeps Emily on hand to translate. 'Tell him to take off his pants.' Since he is not Chinese, this does not tax Emily's skills. 'Ask him if he understands the tremendous pleasure women get looking at naked men.' We never do get to understand it, really; once we are acquainted with Mick- ey's life story, the writhing bodies are visible only through a blur of tears. 'He was an orphan on the streets of Phil- adelphia . . . stuttered so badly as a child he could hardly talk . . . .' At times the whole enterprise seems to be slipping gently into aphasia.